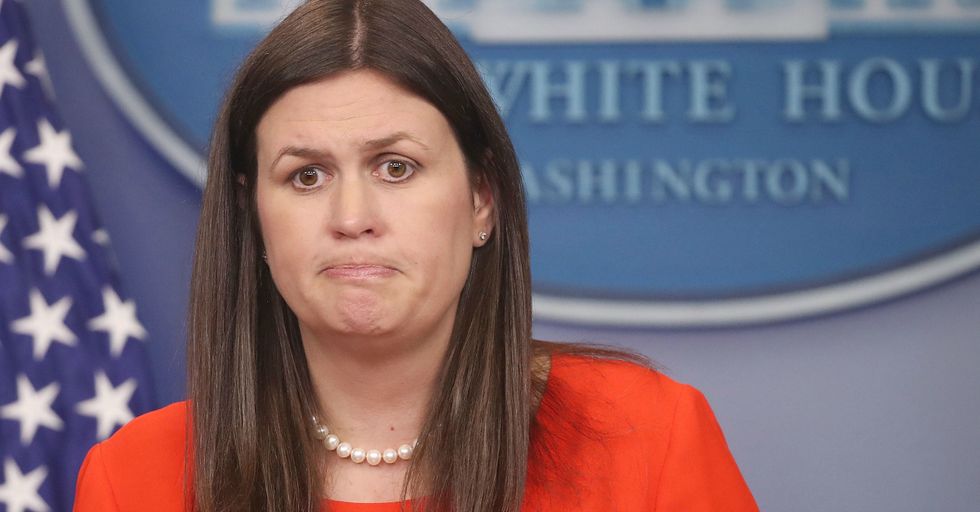 Sarah Huckabee Sanders has done a lot of ridiculous things during her tenure as White House Press Secretary. Just last weekend she managed to completely misunderstand middle-school level mathematics. One of her latest ridiculous moves involves Dumb and Dumber. No, we're not talking about any of the people currently employed in government. We're talking about the classic 1994 comedy film starring Jim Carrey and Jeff Daniels. Yes, really.

The real Russia scandal? Clinton campaign paid for the fake Russia dossier, then lied about it & covered it up. https://t.co/kR8z2zsZ7Q
— Kayleigh McEnany (@Kayleigh McEnany)1508889898.0

The article reveals that the Hillary Clinton campaign and Democratic National Convention paid for research that led to the "Russia dossier." Ah yes, the Russia dossier. You might know it better as the pee tape dossier. Trump himself actually tweeted about it just last week.

It's not surprising that Sanders tweeted about the infamous document being funded by Clinton and the DNC. But the actual source she chose to retweet is interesting.

Can you say, "awkward"? It's not like the Washington Post was the only outlet reporting on this particular bit of news.

So which is it, Sarah Huckabee Sanders? Should we not be paying attention to the Washington Post, or are they actually totally legit? Or is it one of those "do as I say, not as I do" kinda things? We know what you're thinking. Hypocrisy? In the White House?! Say it ain't so!

Sanders wasn't about to let Mark Berman get the best of her, though. She crafted what we can only assume she thought was the perfect response: A clip from Dumb and Dumber.

Specifically, the clip where Jeff Daniels' character seems to chastise Jim Carrey's character, shouting, "Just when I think you couldn't possibly be any dumber, you go and do something like this...and totally redeem yourself!"

What Sanders was probably trying to say with this mysterious clip was that the Washington Post is usually so "dumb," but they managed to completely redeem themselves with this one article (that happens to serve her own agenda). We're gonna go ahead and choose to interpret it instead as a promise that the administration as a whole will someday completely redeem itself after doing so many dumb (and dumber) things.