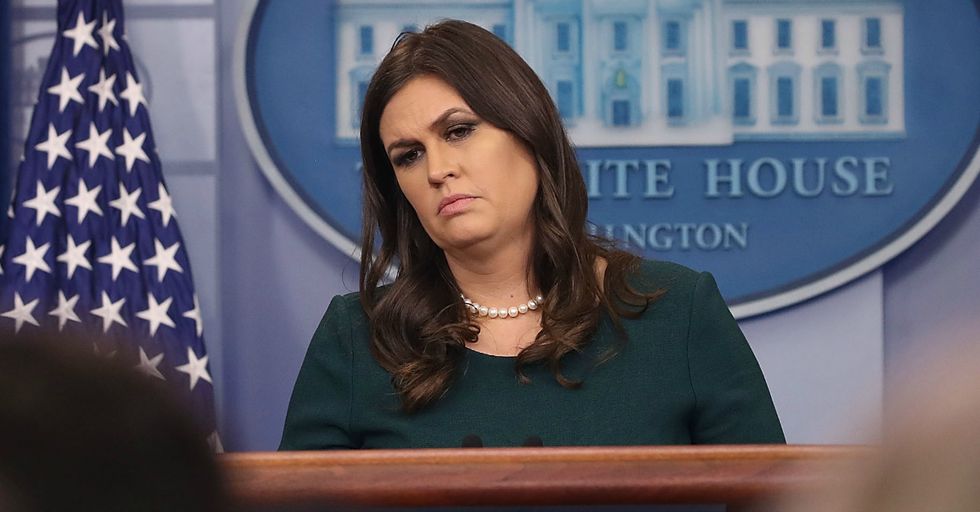 The answer is yes, it can get worse! Following White House Chief of Staff John Kelly's truly appalling comments about how the Civil War was caused by a "lack of an ability to compromise," Sarah Huckabee Sanders took the podium in the press room to basically double and triple down on the administration's bad statements about slavery and the Civil War. It was not pretty.

First, Sanders repeated John Kelly's statements from the night before with an extra-serious grimace on her face so you know she actually believes the bonkers notion that the Civil War could have just been avoided if we "compromised" a little bit.

Sanders: “If some individuals had been willing to come to some compromises on different things, [Civil War] may not… https://t.co/whpTSYZpJ6
— Christina Wilkie (@Christina Wilkie)1509476305.0

For the record, a bunch of actual historians super disagree with this sentiment. Kelly also called Confederate General Robert E. Lee an "honorable man" and basically erased the issue of slavery from his discussion of the Civil War. It was...not good.

When asked to address Kelly's ridiculous comments, she agreed with him and shrugged off Robert E. Lee's attempts to keep an entire population of people enslaved by saying, "Nobody's perfect."

Sanders on Robert E Lee: "All of our leaders have flaws, that doesn’t diminish their contributions to our country” https://t.co/BvLpUU7Sf7
— MSNBC (@MSNBC)1509475736.0

And the hits just keep on coming! If you watch this video, Sanders names a bunch of less-than-perfect presidents including "JFK, Roosevelt, Kennedy..." as if JFK and Kennedy are two separate people. Stop tripping on your lies, Sarah!

Sanders was then asked if she would at least acknowledge that Kelly's comments were offensive to many Americans and inaccurate. Her blunt and scary response? "No."

@CNN Reporter: Does the White House acknowledge that Kelly's comments were offensive to some and inaccurate? Sande… https://t.co/jeMNSdzaLA
— CNN Politics (@CNN Politics)1509477227.0

We know it's your job to speak for the White House, Sarah, but that doesn't mean constantly trying to scare away the truth with your furrowed brows and your snippy tone.

Here's the thing: When you defend slavery, you get called "EVIL TRASH" on the Internet.

Sorry not sorry. Sarah Huckabee Sanders basically stood in front of our country and said that slavery wasn't that bad and we should get over it.

American hero April Ryan called out, "Sarah, was slavery wrong? Does this administration believe slavery was wrong?" as Sanders left.

Sanders didn't answer. There you have it, folks. Our administration actually won't denounce slavery. It's 2017.