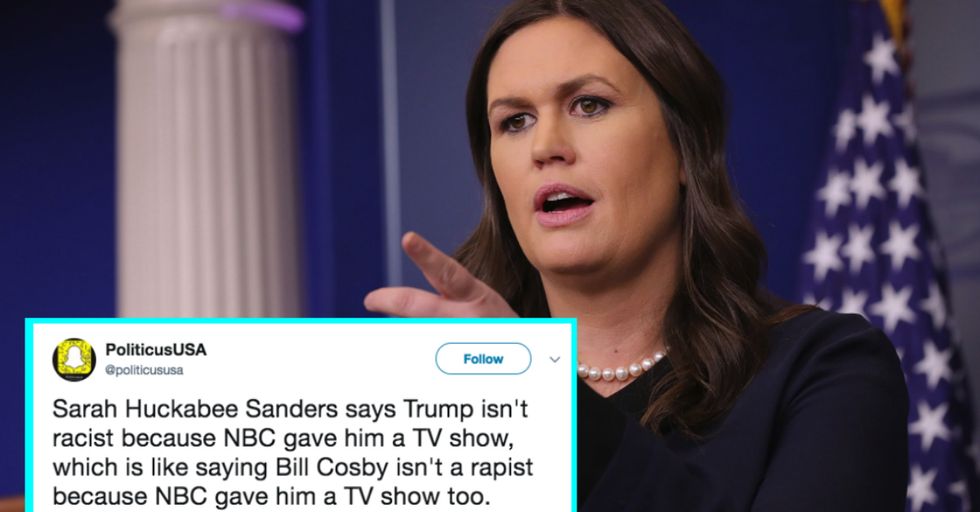 Sarah Huckabee Sanders and I? We're tight at this point. This is article numero seven I've written about her flub ups, straight-up lies, homemade pecan pie wars, and other ridiculous things she's said since she took over for Sean Spicer (a whole 'nother disaster) as White House Press Secretary.

Remember the good old days when you had no idea who the White House Press Secretary was? If asked, you'd be like, "Um, C.J. Cregg?" because The West Wing was about as far as you got when it came to "caring about politics"? Those days are over! Probably forever! Maybe it's for the best, but we're going through a lot of crap we shouldn't have to to get people to finally care about what the government is doing to our lives!

Anyway, back to Sarah Huckabee Sanders.

I don't know how she does it and falls asleep at night, but the woman is, at least publicly, staunchly in Trump's corner. She defends his every dumb remark, his every shockingly inappropriate statement. It's hard to tell if she really believes the stuff that comes out of her mouth or if she's simply a puppet, but at this point, it's also hard to tell which of those is worse.

While it wasn't shocking that she defended Trump against those who are calling him racist, her statement is just plain wacky and illogical:

The guy called Haiti and African countries "sh*tholes," (and has logged plenty of other overtly racist moments before and continuing into his presidency) but he's not racist because NBC gave him a show on television.

If not being racist (or a rapist) was the criterion for not being handed a TV show, we'd literally have no TV shows. Obviously, that's not a reason to give a proven racist the reins to a production, and having a TV show doesn't mean you're not a racist, secret or otherwise.

I don't know what TV shows Sarah Huckabee Sanders is watching, but if she thinks television — as a medium or a concept — is the acme of human morality, we've got some news for her.

'Tis not. To be fair to her though, it's difficult to defend Donald Trump against accusations of racism, mainly because he is so so so clearly a raging racist.

It might behoove us at this juncture to remember why Donald Trump ended his tenure at NBC.

Sarah Huckabee Sanders says "if Trump were racist, why did NBC hire him?" So please nobody tell her NBC fired him FOR BEING RACIST
— John Fugelsang (@John Fugelsang)1516138650.0

Oh yeah. He was fired. For being racist.

Donald Trump's The Apprentice shot a lot of footage of the current president over its 14-season run.

Some of that footage, allegedly, shows Donald Trump, the President of the United States, using the N-word and being generally, well, racist. Not that GOP members would pussyfoot around condemning his comments if the videos were released, but I'd like to watch them try.

Let's get back to the actual reason Donald Trump was fired from NBC:

So, in fact, Sarah, bringing up his tenure with NBC as proof that he's not racist actually 100 percent proved the opposite of your point. At least Donald Trump doesn't discriminate...against which groups he's racist toward.

Stephen Colbert brought up another salient point about Sanders' comment on his show last night:

"I mean, she's got a point," Colbert said, after playing the now-infamous clip of Sanders' comment. "NBC has always shown great judgment with their long-term employees. Just ask Bill Cosby and Matt Lauer."

"But Bill Cosby and Matt Lauer aren't publicly disgusting for being racists," the devil's advocate might say.

To that, we submit the long list of racists who've had TV shows. The Venn Diagram is honestly probably nearly a perfect circle.
And Donald Trump is on that Venn Diagram. Smack dab in the center.