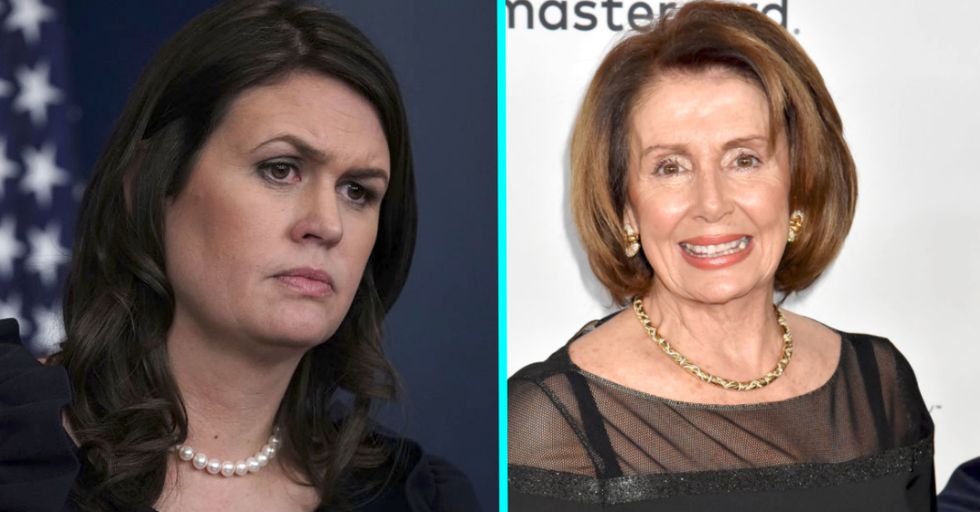 Donald Trump's State of the Union address last night was perhaps the most polarizing presidential speech before it even happened. While Democrats were urged not to boycott or disrupt the event, they definitely made sure to express the begrudging nature of their attendance.

Many women in the audience wore black in solidarity with the #MeToo movement. One of those women, Democratic House Minority Leader Nancy Pelosi, also wore her emotions on her face, just like the rest of the Democrats at the State of the Union, and now she's getting flak for not smiling while Donald Trump spewed extremist speech.

It's safe to say that Donald Trump was pretty pleased with his own performance last night at the State of the Union.

While Trump delivered a speech full of lies and devoid of any real acknowledgment of how divided this nation is, the standing ovations from Republicans flowed in.

He played the speech to these vague moments of conviction and managed to draw Republicans' attention away from the fact that he didn't actually propose concrete policies for any of the issues on which he took so hard a stance.

But the Democrats in the audience didn't fall for Trump's ruse. They sat back as people like Ted Cruz — who the president insulted wildly during the campaign — stood and whooped.

Trump exploited families, particularly a black family who'd lost two daughters, to push his anti-immigration beliefs and his aggressive policy with regard to North Korea. He twisted the experiences of these real, grieving people to justify violence and discrimination toward so many others.

So no, the Democrats weren't smiling throughout his speech.

People took particular notice of Nancy Pelosi's "not impressed" face while the affair marched on. Forgive the House Minority Leader if she didn't look thrilled to be listening to the world's worst president deny the true state of the union and perpetuate hate during his State of the Union.

Sarah Huckabee Sanders appeared on CNN on Wednesday morning to discuss the speech, and while she was there thought she'd offer up the pettiest of petty, most sexist of sexist criticisms of Nancy Pelosi:

CNN's Chris Cuomo commented on the divided nature of the room during the State of the Union and said he's never seen Nancy Pelosi's face like that. "I'm going to be a little bit in disagreement with you," Huckabee Sanders responded, "I think Nancy Pelosi looks like that all the time. I think she should smile a lot more often. I think the country would be better for it." The Internet, including me, was immediately like, "Girllllll, hold my earrings."

Um. This is the person who told Nancy Pelosi to smile more.

Sarah Huckabee Sanders perpetually looks like she smelled something so bad she's about to cry. And you know why that is? It's because she has. She's had to smell and handle and deliver Donald Trump's sh*t to America for months now. She of all people should understand why someone wouldn't be able to muster a grin while the president is talking. Women — Sarah Huckabee Sanders included — should be able to smile or not smile whenever they want.

And for the record, Nancy Pelosi is perfectly capable of smiling.

Not that it matters. She should be able to grimace her way through every single day if she wants to. But for the love of all that is sane, how do you fault a woman for not smiling while she's being forced to sit in a room with a bunch of old white guys who want to legislate her right to her own body away and listen to a man who has sexually assaulted more than a dozen women? Come on.

Obviously, the Internet wasn't having any of Sarah Huckabee Sanders' nonsense.

Telling a woman to "smile more" has become the number one prime example of the casual misogyny that infects our daily lives. Any person who actually respects women and sees them as equal to men would never suggest that a woman smile more. It's Being a Decent Human Being 101.

And it's bad enough that men are constantly condescending women by telling them to smile, but for a woman to do that to another woman? That's called internalized misogyny, babe, and you've got it.

Sarah Huckabee Sanders may think Nancy Pelosi should smile more, but let's think about this for a second.