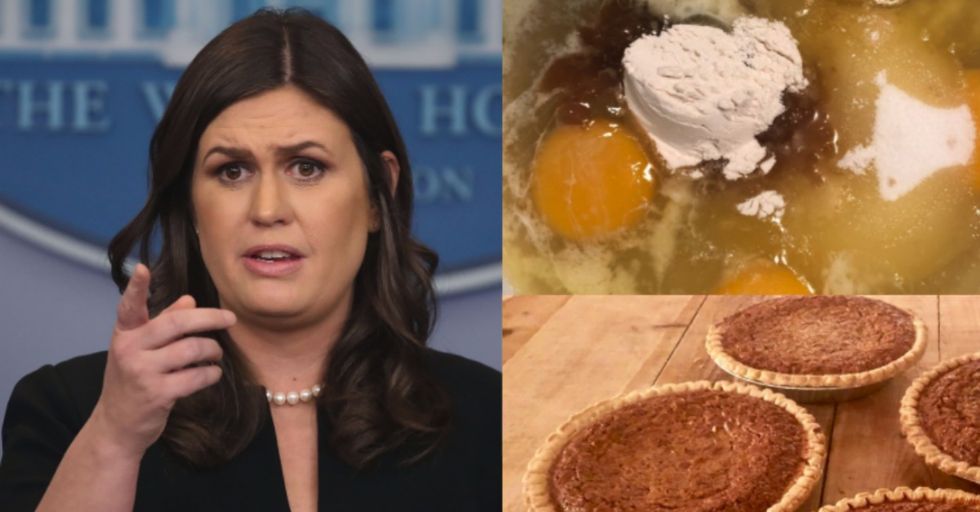 Turns out Sarah Huckabee Sanders, despite her best efforts to convince us otherwise, is a human being with a sense of humor, sort of. When she's not calling Donald Trump's accusers liars, refusing to denounce slavery on national TV, or not understanding basic math, she's apparently really into baking pies. Pecan pies, specifically.

The legitimacy of Sarah Huckabee Sanders' supposedly homemade pecan pies is the subject of the latest White House Press Room scandal. They're calling it #piegate and labeling it #fakepies, and it's caused a ruckus all over Twitter.

Sarah Huckabee Sanders is embroiled — or should we say embaked — in a scandal that shockingly has nothing to do with Donald Trump.

Instead, it's about pies. Pecan pies.

You might remember that Sanders got in a spot of trouble earlier this year when she posted this picture of a chocolate pecan pie on Twitter:

I️ dont cook much these days, but managed this Chocolate Pecan Pie for Thanksgiving at the family farm! https://t.co/rO8nFxtly7
— Kayleigh McEnany (@Kayleigh McEnany)1511466010.0

She claimed to have baked it for Thanksgiving. But look at it. It's perfect. And it's on a lily-white background. And it's perfect. Thus began #piegate.

White House correspondent April D. Ryan was brave enough to call out the press secretary. After all, Sarah Huckabee Sanders is a huge liar.

I am not trying to be funny but folks are already saying #piegate and #fakepie Show it to us on the table with fo… https://t.co/Aj2uQSbs6h
— AprilDRyan (@AprilDRyan)1511542481.0

Ryan urged Sanders to post pictures of people eating it and photographic evidence that she actually cooked it. The manufactured controversy was all in good fun, unlike the numerous times Sanders has endangered the American people with her slander.

Sanders replied to Ryan's #fakepie accusations with a promise to make her another one the next week.

What do you think? Is Sarah Huckabee Sanders' attempt to be likable and human working? Has she convinced you she's not a horrible monster yet?

Though it took her longer than a week, Sanders finally declared that it was "pie time" on Wednesday.

She tweeted at April Ryan, to whom she'd previously promised a homemade pecan pie. She even asked if Ryan would prefer it with or without bourbon, which we think is a ridiculous question. It's 2017. Obviously, we need alcohol in any way we can get it. And folks, this is when #piegate really heated up (to about 350 degrees Fahrenheit)...

April Ryan, like the respected journalist she is, requested multiple sources confirming that the pie was really baked by Sanders.

But, Ryan stipulated that she "won't eat it!" That's probably a wise move. Even if Sarah Huckabee Sanders provided a list of ingredients and purported to tell Ryan exactly what was it in, she could never be sure that Sanders was telling the truth. Because she lies all the time. About everything.

Sanders took Ryan up on her request, first posting a photo of the nuts she planned to use for the pies.

Thanks to @VP Chief of Staff @Nick_Ayers for supplying the pecans from his family farm in Georgia #piegate https://t.co/Lx7LpMwF4V
— Kayleigh McEnany (@Kayleigh McEnany)1513218562.0

They were supposedly delivered to her bundled in festive red ribbons by Mike Pence's Chief of Staff's family farm in Georgia, then cozily nestled on a reclaimed wooden table. Sanders really wasn't doing much to assuage rumors that her pie-baking habit is more of a search-for-pie-related-stock-photos habit.

But then she got down and dirty, posting pictures of the mixing and baking phases of the pie process.

Ingredients all mixed up and pies in the oven! @AprilDRyan let me know if you need further documentation #piegate https://t.co/OVYLg1gBgO
— Kayleigh McEnany (@Kayleigh McEnany)1513222266.0

Maybe we're crazy, but we think there are a lot of steps between "unmixed bowl of eggs and sugar" and "perfectly sculpted pies in the oven on their way to Delicious Town." Steps that are missing. Undocumented. And we all know how much members of the Trump administration hate undocumented things... But seriously, where did those picture-perfect pie crusts come from? We smell a rat.

Sanders didn't post any videos or pictures other than this one of the finished products.

So maybe she baked them. But we're still skeptical. This is a real Boy-Who-Cried-Wolf situation. She's lied to us so many times that we can't tell when she's telling the truth.

The reactions to the new developments in #piegate were varied, but many were still pretty unsure that Sanders baked the pies herself.

It's so true! Either Sanders' home looks like a Williams-Sonoma or she is straight up lying about baking pies. We wouldn't put it past her. After all, she's a deceitful hatemonger. Happy Holidays!