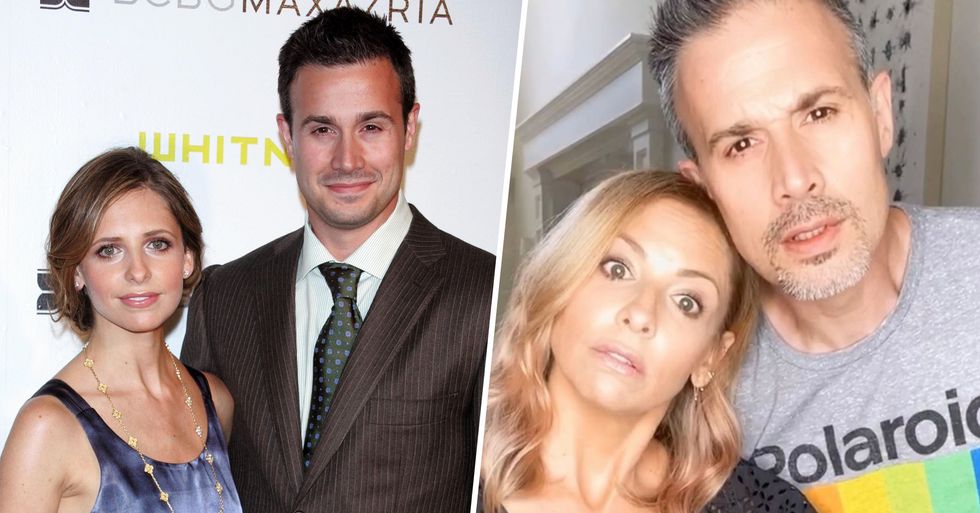 Sarah Michelle Gellar has just posted the sweetest message for her husband in aid of their anniversary...

And it's making us all fall in love even more with this adorable couple!

Now, Sarah Michelle Gellar has been a household name in Hollywood for years.

Hailing from Long Island in New York, her acting career began at the age of 4 when she was spotted by an agent in a restaurant in Manhattan.

Her first-ever role came 2 weeks later when she nailed the audition for An Invasion of Privacy...

And this lead little Sarah to work in numerous TV commercials.

During the 1980s, Sarah landed numerous small roles as a teenager...

But it wasn't until the 1990s when Sarah began to gain some serious recognition.

Her role in ABC's All My Children proved her talents and capabilities in-front of the camera and it didn't take long for the budding new actress to move onto bigger and better things.

And this is where she landed the leading role for Buffy The Vampire Slayer.

The show ran for 7 seasons and during its broadcast, it earned Sarah 5 Teen Choice Awards, the Saturn Award for Best Genre Television Actress, and a Golden Globe Award nomination for Best Actress – Television Series Drama.

She will forever be recognized as Buffy...

And even though the actress has had her fair share of leading roles and presenting jobs since, Buffy The Vampire Slayer will always be her trademark.

So, what about her personal life?

Back in 1997, Sarah met actor Freddie Prinze Jr. while filming for the 1997 teen horror I Know What You Did Last Summer.

The pair struck up a strong friendship...

And they didn't actually start dating until 2 years later in 2000. "We were friends for a very long time. We've had many dinners before. We were supposed to go with someone else, and that a third person didn't make it out and we decided to still go," Sarah recalled in an interview, "We were just two people at dinner catching up. We had a long car ride and a long dinner, and things just happened."

Just imagine if their friend did turn up for dinner?

There perhaps wouldn't be the love story that there is today...

But thankfully, there is!

When they first started dating, the pair "didn't believe in marriage," but in 2001, that all changed when Freddie popped the question.

And they've been going strong ever since!

Alongside appearing in movies together...

They are literally the definition of couple goals.

But what is the secret behind their long and successful marriage?

Speaking to People back in 2016, Sarah said:

"Take the 10 minutes – put the phone down. Have a cup of coffee together. Walk the dog at the end of the night. Read a story with your kids," she said. “Make the most of the time that you have. We are all pulled in so many directions, so make sure that, whichever one you are focusing on, you’re present."

Because she and Freddie have just celebrated her eighteenth wedding anniversary!

Tonnes of well-wishes and congratulations have been pouring in for the happy couple...

She posted this gorgeous throwback to their wedding day...

With the caption, "You... are my favorite husband."