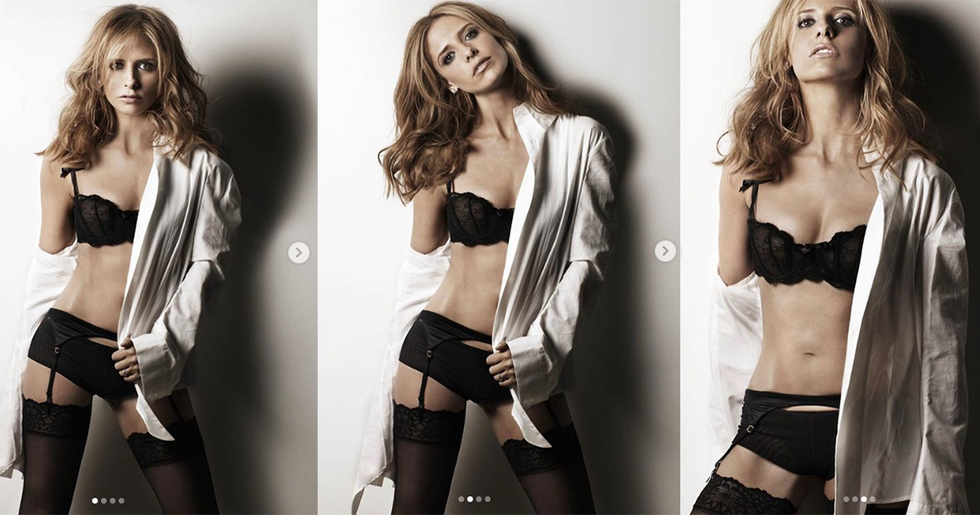 Dieting can be a slippery slope. In an ideal situation, we'd all eat a balanced diet in quantities suitable for our individual bodies. We would be unafraid to indulge in foods simply for pleasure. Unfortunately, reality doesn't often reflect this– and that leads to some real problems.

So, let's talk about Thanksgiving weekend. Just before the festivities began, actress Sara Michelle Gellar posted a photo to her Instagram account. It was intended to be a little joke about over-eating on Thanksgiving– but that isn't how many people took it. Many assumed she was making a "thin-spirational" post, encouraging her followers to refrain from over-indulging. Others took it a different way, and from there, the debate began.

Keep scrolling to see the whole spiral, including the actress's response to her Instagram photo turmoil.

Another Thanksgiving has come and gone.

People across the country treated themselves to a Thanksgiving feast while reflecting on the things in life to be thankful for alongside friends and family.

And sometimes there’s a little overindulging.

Come on; sweet potatoes, turkey, and pie? We can’t be expected to have perfect self-control when someone starts cutting into the pie.

But there’s none of that here:

Actress (and vampire slayer) Sarah Michelle Gellar posted on her Instagram about the upcoming Thanksgiving weekend. And people did not take it well.

To be fair, she frequently about food and various recipes.

It comes with the territory of being the co-founder of an organic baking company, in addition to an actress.

And the whole organic baking thing is pretty cool.

I mean, if you’re going to eat cake, you may as well use quality ingredients, right?

The photo was captioned: “I’m just going to pin these up all over my house as a reminder not to overeat on Thursday."

The celeb's followers voiced multiple concerns over her wording, as the post seemed to be promoting the idea of holding back to stay "thin" over the Thanksgiving weekend.

Your caption is problematic and I suggest you do some research on eating disorders, the mental health issues that go along with them, and how diet culture is harmful to women. Girls look up to you, and you should be mindful of the message you’re sending. -catjefferson_

Diet culture amounts to the belief that thinness is the ultimate ideal and automatically equals health while promoting the idea that weight loss heightens your value and status.

It's not only about being on a diet.

Diet culture also negatively reinforces certain ways of eating, which can make people hyper-vigilant about what they eat—and feel unnecessary shame over their food choices.

This is because it proves oppressive to people who don’t match up with the "thin" ideal, and affects both mental and physical health.

Meanwhile, others encouraged SMG to think of her younger followers.

You have a platform to promote healthy body image and lifestyle. Please be aware of how your posts can be interpreted and how they can influence young women who look up to you. -mccluskymichelle

These followers wondered if those young women might get the wrong idea.

It’s easy to see how younger, impressionable girls might internalize diet culture. Growing up with an unhealthy idea of eating and body image can’t be good.

Important to think of young women/girls when you post things like this. How many do you think will throw up there supper after eating their Thanksgiving meal because they over-ate and worry about gaining weight? Let’s not encourage unhealthy attitudes and anxiety toward food. -brynnh2

Another commenter thought the post was the opposite of empowering.

How empowering for women! Disappointing to use your platform to promote thinspiration on a once a year holiday that should be about togetherness and gratitude. -kaitmcg

While others found it perfectly empowering.

I loved your post. Inspired me to hit another shadowboxing class before heading to my Aunt's for Thanksgiving. Remembering to eat a healthy amount for our body type keeps us, all-powerful woman. Stay you, stay true. -3milyrea

Some people didn’t understand all of the drama.

So what? It's ok to be fat and proud, but everyone's shaming her for making an effort to be physically fit? If fat and proud is real and legitimate on it's own then why hate on someone that's not so? -danthorn76emp

Some saw both sides of the story.

Idk how I feel about this because if that's your desire to look that way ok I get it. On the other hand, little girls should never feel ashamed of there appearance. I'm sorry u went through that but it is dangerous to post something like this -fangirl_miranda84

This commenter worried about people not eating due to posts like this.

When people in residential eating disorder treatment hang this picture up on the wall as their inspiration for not eating. This is a fact. This happened. Consider your impact. -jojiejewels

"It’s come to my attention that some people think I was fat shaming with this post. That could not be further from my intentions," Michell said as she went on to explain how her post was to be taken as a"joking reminder" to herself.

Thank you for explaining your intention. Have a great thanksgiving queen. -supmattj

I'm glad to hear you apologized for this comment, but your apology falls flat when you consider that you are suggesting that in order to look like this, you have to starve yourself. I can tell you that I have never known a single fat person who hasn't been on multiple diets, and I've known more than one thin person who doesn't have to think for a moment about what they're eating. Also, why do you feel the need to pose in lingerie? You have played iconic characters known for their intelligence. Do what you like, but put some thought into it. Peace. -therealcie

Some people didn’t feel as if an apology was warranted.

It’s completely ridiculous that you have had to apologize for this. Those who were ‘offended’ by it clearly have their own issues and lack your determination and will power to the best version of themselves. I saw that photo and thought you looked incredible, I viewed it as an inspiration to get my ass back to the gym rather than an opportunity to berate you for making me feel bad that I’m not that size. Keep on being you and posting the pics, you are not responsible for others insecurities and issues -lyndseyan

And others related to the thought behind the post.

Good for you! As someone who is overweight, I don’t consider this to be fat shaming at all! Almost every Thanksgiving I’ve over-ate. Some to the point of throwing up. This year I stopped at being comfortable, and felt much better about myself! I enjoyed my food but didn’t let my eyes get the best of me. -fire.to.phoenix

Here’s what they made of the message:

I don't think she's sending the wrong message. She's just saying to control your eating. One thing is to eat 'cause you're hungry and other is to eat cause the food is just there, in front of you. She can look like that and still eat. The only thing she's saying is to not overeat because not only it's not healthy, but probably you're just not hungry anymore. -ornelladenise

Of course, some people were just there to be rude.

This photo is so old it's sad. You haven't looked like this in 10 years. Maybe be a little more realistic with your goals. -jmwalls5"

Which, is all too common among female celebrities with social platforms.

Like the time people started commenting on actress Sarah Hyland’s weight. To comments grew so pervasive that Hyland later explained that she’d had a difficult year, which caused many physical changes to her body that she simply wasn’t in control of.

Or the time that Lena Dunham had to clarify what a diet meant to her.

A tabloid magazine published this cover story, advertising slimdown tips straight from the diet of Lena Dunham. Needless to say, she was not pleased.

So she responded in an amazing way.

Leah shared 20 "slim-down" tips with her social audience. At the end of her list, she shared, "I have no tips I give no tips I don't want to be on this cover cuz it's diametrically opposed to everything I've fought my whole career for and it's not a compliment to me because it's not an achievement thanx." Now that’s what we call a clap-back.

Clearly, the idea of diet culture is more insidious than we often discuss.

One celebrity's badly-taken joke aside, it’s clear that America has itself a diet culture problem—and we need to find more ways to encourage healthy lifestyles without imparting unhealthy eating habits or making a certain body type seem like the only option. What do you make of this? Share the story with your friends!