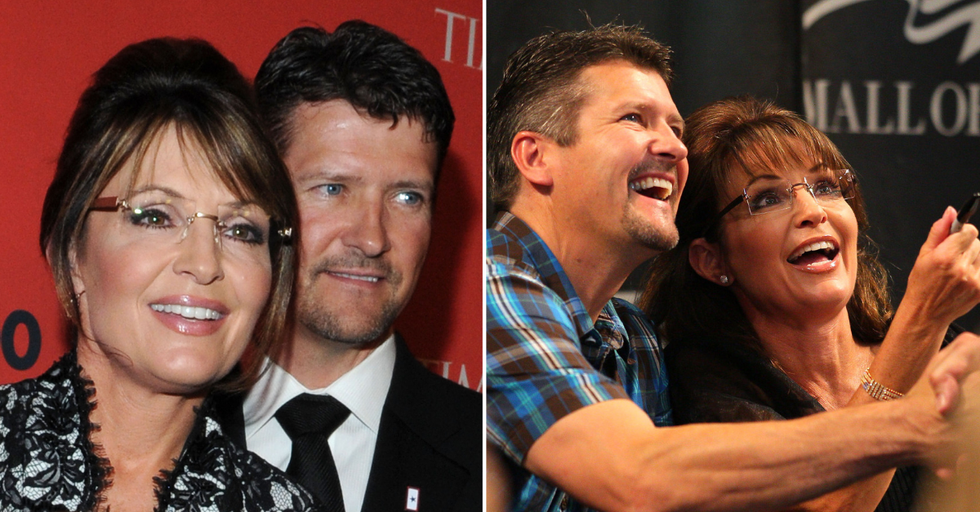 Divorce is rarely easy, and it’s even more difficult when it happens to a couple in the public eye.

Remember Sarah Palin? It's been a while since she's been a part of our public consciousness, but she certainly left a mark. The former Governor of Alaska who ran as Vice President on the late John McCain's presidential ticket is getting a divorce. Or, rather, her husband Todd is divorcing her.

In the immortal words of Adele, “sometimes it lasts in love, but sometimes it hurts instead.” Keep reading to hear how it all went down.

All the way back to 2008. Break out your BlackBerry smartphone, throw on your low-rise jeans, get yourself an aggressive spray tan, and let's get down to business.

Ok good, now we're all on the same page.

So here we are. It's 2008. John McCain is trying to pick a running mate for the presidential election. Everyone figures he's going to go with either Mitt Romney or Mike Huckabee. Or, I don't know... Joe Lieberman. But no. He fakes left, goes right, and picks a woman no one has ever heard of before. Enter the Governor of Alaska, wife, and mother of 5 children, Sarah Palin.

She wasn't a traditional choice, but at first, it seemed to be a good one.

According to the Washington Post, after McCain announced Palin as his running mate, he raked in $7 million dollars in contributions in only a single day.

Unfortunately, the more Palin hit the campaign trail and spoke publically, the worse things got.

No one can forget her classic Katie Couric interview during which she said so many gibberish things that Tina Fey parodied her on Saturday Night Live without changing a single word. That's all it took. The sketch gave birth to the now-iconic line, "I can see Russia from my house!"

Palin talked a lot about "family values" in the Republican sense...

So when on September 1, 2008, Palin announced to the public that her 18-year-old daughter Bristol was pregnant, the Conservatives were shocked. Later, her oldest son, Track Palin, was "accused of three attacks on people close to him over the past few years, the most recent coming last week. Palin, an Army veteran who served one year in Iraq, entered a program intended to rehabilitate veterans after he was arrested in an assault on his father less than a year ago."

But after she and McCain lost to Barack Obama and Joe Biden, she and her brood more or less disappeared for awhile.

Well, now she's back in the press with a shocking new announcement.

Todd Palin, Sarah's husband of 31 years has filed for divorce citing "incompatibility of temperament" and that “they find it impossible to live together as husband and wife" according to NBC. Oof. That's not even ye olde "irreconcilable differences," a phrase vague enough to let people guess what may have happened. "Incompatibility of temperament" makes it seem like she was, well, ill-tempered to say the least.

And nothing stings more than the timing of this announcement.

The divorce paperwork was apparently submitted on Aug. 29, only a mere eight days after the couple's 31st wedding anniversary, on Todd's birthday. Yep, he submitted the paperwork on his own birthday. Cold as ice, man.

The couple were actually high school sweethearts who eloped in 1988.

According to People, the couple's close friend, actor Dean Cain said, "They seemed wonderful together. I’d hate to speculate on the cause — what happens behind closed doors, and how people grow and change over time is something no one can ever predict or understand, save those two people." He continued by saying, "I know that they’re both extremely devoted and wonderful parents and I’m certain that they’ll both remain dedicated to Trig and their other children." These two weren't the only celebrity split that rocked the nation. Keep reading to hear all the juicy details of these celebrity splits.

The former Governor of California and indestructible android separated from his wife after admitting to fathering a child with the couple’s housekeeper in 1997. Their divorce finalized in 2017, after six years of separation.

Pitt and Jennifer Aniston split back in 2005, after rumors of Pitt and Mr. & Mrs. Smith co-star Angelina Jolie getting close on set. The “Team Aniston" and “Team Jolie" shirts that followed probably didn’t help.

His second divorce was the real shocker, if we’re honest.

Who didn’t think Brangelina was built to last? Nevertheless, the couple announced their split in 2016 after over a decade of partnership and raising six kids together. The divorce filing cited “irreconcilable differences," specifically Jolie’s disagreement with Pitt’s parenting methods.

Amber Heard donated the money from her rough divorce.

When Amber Heard filed for divorce from Johnny Depp after 15 months of marriage, Heard cited verbal and physical abuse as the reasoning. Depp’s friends retaliated by denying this and calling her a gold-digger, and Heard’s response was to donate the $7 million settlement to the Children’s Hospital of Los Angeles and the American Civil Liberties Union.

Heidi Klum and Seal were the most fashionable of couples.

Unfortunately, they split in 2012. Seal’s mysterious tweet that simply read “The End" was followed by an official announcement. Klum claimed that Seal had anger issues, and Seal claimed that Klum had an affair with her bodyguard. While Klum did date her bodyguard, she maintains that the relationship began after her separation. Nevertheless, Seal and Klum finalized their divorce in 2014. Read on to find out about the most convoluted love triangle you’ll ever see!

The TLC reality show Jon & Kate Plus 8 followed the parents of sextuplets (plus twins from a previous pregnancy). In 2009, even as the show had hit its stride in popularity, Jon and Kate had a very public split. Jon tried quitting the show on “moral grounds," and the show was renamed to Kate Plus 8.

When Katie Holds filed for divorce after five and a half years of marriage to Tom Cruise, she feared a reaction from the Church of Scientology—as Cruise is a member. Thankfully, everything was resolved a mere ten days after Holmes filed for divorce, when the couple agreed to and signed a divorce settlement.

Scandals in the world of golf were unheard of before Tiger Woods’ many affairs.

In December 2009, it was reported that Tiger Wood had engaged in multiple affairs, and Woods responded by admitting to it and taking a break from his golfing career. Unsurprisingly, Elin Nordegren (his wife at the time) filed for divorce soon after.

Reynolds, Taylor, and Fisher: a tangled love triangle from the ‘50s.

Debbie Reynolds and Eddie Fisher (parents of the late, brilliant Carrie Fisher) ended their marriage after Fisher’s affair… with Reynolds’ best friend, none other than Elizabeth Taylor. Fisher and Taylor married in 1959, only to divorce when Taylor had an affair with actor Richard Burton and left Fisher for him!

Alec Baldwin and Kim Basigner’s divorce led to a custody battle that lasted for years.

Finalized in 2002, Baldwin and Basinger’s divorce gave way to a fraught custody battle over their daughter, Ireland. By 2008, each parent had spent millions on legal costs over the course of a seven year battle. Next up, one celebrity’s marriage with his wife bordered on obsession. Find out who!

Marilyn Monroe and Joe DiMaggio were married for less than a year before their unhappy breakup.

Monroe cited “mental cruelty" from DiMaggio as the catalyst for her divorce, and it had been reported that DiMaggio was controlling. Though they reunited as friends years later, his lifelong devotion to her raised questions. DiMaggio claimed her body and arranged her funeral after her death, and had flowers delivered to her grave three times a week for the rest of his life.

Shepherd and Sally had agreed to having a child via surrogate, and were months into the surrogate’s pregnancy when the couple split. The complication arose from Shepherd renouncing maternity of the child, and the pair went to court over financial responsibility for the child. Sally has full custody, and after months of legal battles, Shepherd was legally named the mother of the child and required to pay Sally child support.

Hulk Hogan’s infidelity ended his marriage, and his reality show.

Linda filed for divorce after Hulk had an affair with his daughter’s friend, decidedly ending their 25-year relationship and throwing a wrench in their reality show, Hogan Knows Best. Linda went on to accuse Hulk of drug use, and having a violent streak, which he denied. The former couple remain on unfriendly terms.

Just two years after getting married, Gest sued Minnelli for $10 million and claimed that she beat him during alcohol-fueled rages. Minnelli retaliated by suing Gest, saying he stole $2 million from her. The accusations continued, as Minnelli accused Gest of poisoning her and Gest accusing Minnelli of giving him an STD. They finally called a truce and dropped both suits four years later in 2007. Ever heard of a divorce lasting longer than a marriage? One celebrity couple’s did! See what happened on the next page.

The couple had begun the adoption process a few months before the scandal broke that James had conducted multiple affairs during his marriage. James checked into a rehabilitation facility to try and save his marriage, but Bullock ended up filing for divorce. She continued with the planned adoption as a single mother.

Stefani filed for divorce from her husband of nearly 13 years, Gavin Rossdale, after it was revealed that he’d cheated on her for years. The couple now shares custody of their three kids, and Stefani, of course, is now in a relationship with Blake Shelton.

Prince Charles and Princess Diana both had extramarital affairs.

At a certain point in the high-profile royal marriage, it became clear that the couple was incompatible. Charles carried on an extensive affair with his former girlfriend, Camilla Parker Bowles, and Diana later had an affair with the family’s former riding instructor. When discussing her husband’s affair with Parker Bowles, Diana said, “"Well, there were three of us in this marriage, so it was a bit crowded."

Christie Brinkley was wronged, but at least she got the better deal out of it.

After Brinkley’s then-husband, Peter Cook, had an affair with his 18-year-old assistant, he accused Brinkley of ransacking his office in retaliation. So, Brinkley had to pay him $2 million in their divorce, but she got all 18 of their owned properties and custody of their kids.

Yep, the pair were married for 72 days, and their divorce lasted for over 500. Humphries wanted an annulment and Kardashian insisted on a divorce. Interestingly, the actual wedding (and TV special that captured it) cost about $10 million—all for a marriage lasting roughly 10 weeks. Are you a fan of celebrity drama? Share this story on Facebook with your fellow fans and enthusiasts!