Sarah Palin Tried to Attack Congressman Ted Lieu for His Stance on Gun Control, but She Had No Idea That This Would Happen | 22 Words 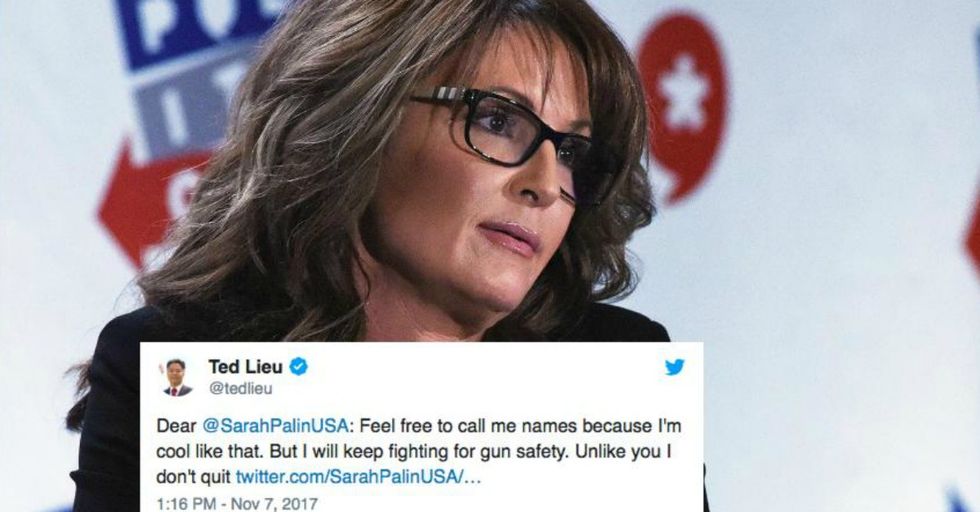 Sarah Palin Tried to Attack Congressman Ted Lieu for His Stance on Gun Control, but She Had No Idea That This Would Happen

This Sunday, a gunman opened fire in a Texas church, killing 26 people and injuring 20. It was the second mass shooting in 35 days to make records. America was once more forced to witness the insincere specter of politicians expressing their grief while making half-hearted noises about why gun control isn't in the best interest of the people.

One Democratic member of the House of Representatives, California Representative Ted Lieu, decided he wasn't going to participate in the empty spectacle anymore.

Lieu walked out during a moment of silence for the victims of the shooting to protest the lack of movement on anti-gun policies.

"I can't do this again," Lieu said during a Facebook Live video in the hallway. "I've been to too many moments of silences. Just in my short career in Congress, three of the worst mass shootings in US history have occurred. I will not be silent. What we need is we need action, we need to pass gun safety legislation now."

Lieu wants to ban assault rifles and bump-fire stocks, the accessory that made last month's Las Vegas shooting so deadly.

My thoughts and prayers are with the victims and families affected by the mass shooting in Sutherland Springs.
— Ted Lieu (@Ted Lieu)1509916009.0

He also wants to pass a universal background check law. All of these are commonsense measures, and yet none have been enacted by lawmakers. "I urge us to pass reasonable gun safety legislation ..." Lieu said. "We need to do that. We cannot be silent. We need to act now."

Not everyone was a fan of Lieu's walkout. The former Republican governor of Alaska, Sarah Palin, commented on Lieu's post.

Palin is famously pro-gun and has been pictured many times with different sorts of rifles. There's also numerous videos of her hunting caribou in Alaska.

Lieu, however, wasn't about to take her insult sitting down.

"Dear @SarahPalinUSA:" Lieu tweeted. "Feel free to call me names because I'm cool like that. But I will keep fighting for gun safety. Unlike you I don't quit."

By quitting, Lieu was referring to Palin's infamous decision to quit her Alaskan governorship in 2009.

Palin had also previously resigned from the Alaska Oil and Gas Conservation Commission (AOGCC) in 2004, a move which propelled her into the national spotlight and even helped her become a vice presidential candidate for John McCain in 2008. Palin may have come prepared to start a fight, but Lieu had no problem ending it. Then again, his Twitter bio reads as follows – "Husband of Betty, the love of my life. Father of two great kids. USAF veteran. Member of Congress. In that order. Also, I don't take orders from Vladimir Putin."