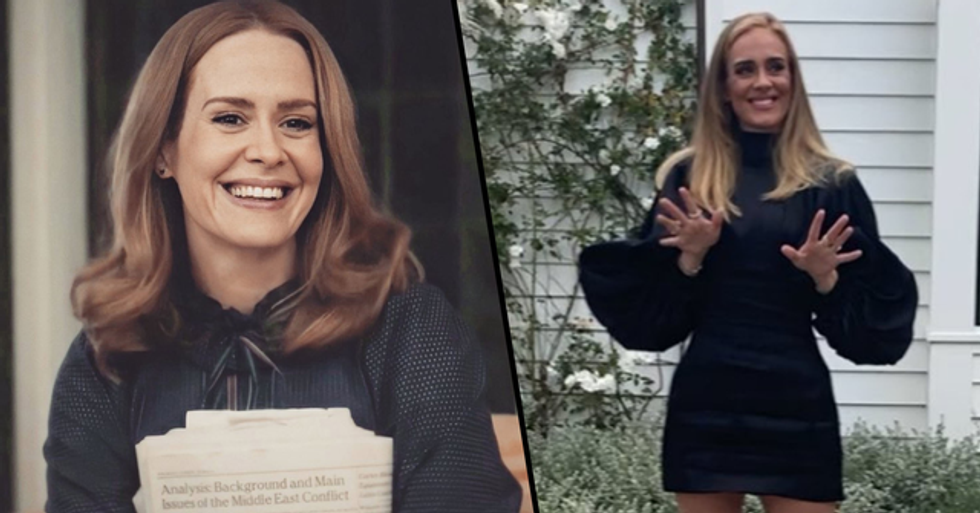 Ever since Adele revealed her incredible weight loss last week, people have been pointing out her uncanny alikeness to the American Horror Story star, Sarah Paulson.

And now, Paulson has given the most perfect response to their resemblance.

Keep scrolling to read about Adele's transformation, and to hear what Paulson had to say to their uncanny resemblance...

But, hey, people are always going to hate, aren't they?

Thankfully, the majority of people have had nothing but compliments for Adele's incredible transformation.

But there's one thing that many people have been pointing out...

And it is Adele's sudden resemblance to actress, Sarah Paulson.

Now that Adele has lost weight, people can't help but notice her resemblance to the American Horror Story actress.

I have to admit, the resemblance is uncanny.

People have been getting very confused over the matter...

Is it Adele or is it Sarah? No one knows!

But now, Sarah herself has commented on the resemblance...

And she came back with the most perfect response.

She opened up about her resemblance to the singer in an interview this week.

Speaking to EW Live on SiriusXM this week, the actress recalled how she first became aware of the comments when she noticed that her name was trending on Twitter.

It turns out the comparison comments have been happening for quite some time.

She said: “I was like, ‘what? Did I die? What happened?’ But I was scrolling through and then I was like, 'Oh. It’s the Adele thing again.'"

The actress is flattered by the comparison...

But she explained that she wished people were comparing their talent rather than their appearance. “What I wish they were comparing was my talent to her talent, and saying that mine was as great as her."

Well, I think we can all agree that both women are insanely talented and beautiful...

Talk about girl power. For more on powerful and inspiring women, keep scrolling to read the incredible story of "Rosie The Riveter"...