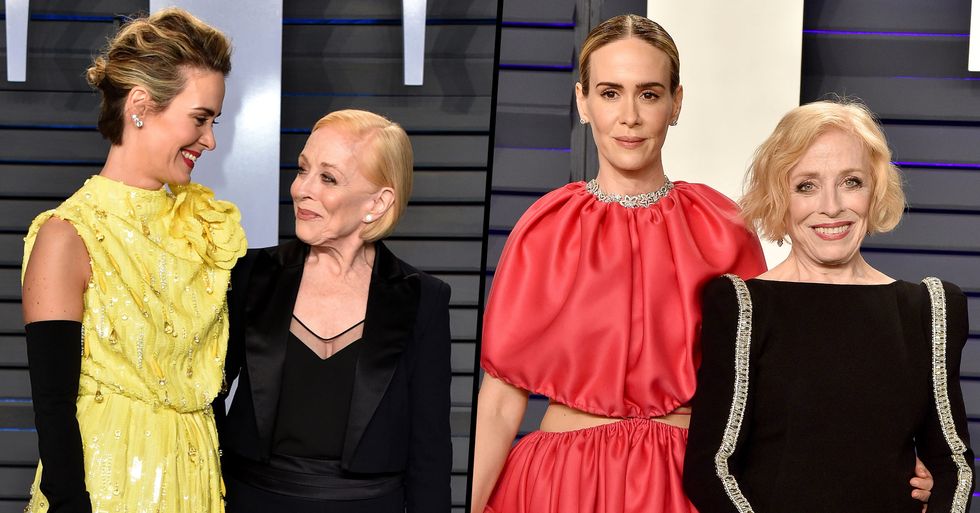 Sarah Paulson has spoken out about the "horrifying" comments she receives about the "huge" age gap with her partner, Holland Taylor...

Let's be honest, Sarah Paulson is the ultimate scream queen.

The actress, best known for her work on the smash hit anthology series American Horror Story, is a Ryan Murphy favorite and regularly stars in his shows.

Gaining popularity through her appearance in TV series such as Law & Order and American Gothic.

The star has gone on to well and truly dominate the small screen...

But of course, it was American Horror Story that truly catapulted her into the mainstream spotlight.

What started off as a small role soon saw Paulson become a series regular, often starring as the main character in each of the spooky storylines.

She's also made a successful crossover to the big screen...

Starring in the likes of 12 Years a Slave, Birdbox, Ocean's 8, and Carol.

But there's another thing that has put Paulson in the spotlight...

The Hollywood stars were first romantically linked 5 years ago.

But, the pair apparently first locked eyes at a party a decade before they started dating, but Paulson was dating actress Cherry Jones at the time.

She told The New York Times in 2016 that she was instantly taken aback by Taylor's beauty that first time they met...

Admitting Taylor was "probably the most exquisitely beautiful woman" she'd ever seen.

Fast forward a decade, and it seems it was Taylor who took the plunge.

The star reportedly slid into Paulson's DMs, after they reconnected while working on a project for Martha Plimpton. "It's a long story. We met a very, very long time ago. I was with someone else; she was, too," Paulson recalled while appearing on a 2019 episode of Watch What Happens Live With Andy Cohen, "We sort of breezed by one another, and then started following each other on Twitter, and then … " Fellow guest then Billy Eichner asked, "Holland Taylor slid into your DMs?" "She actually did," Paulson replied. "Yeah, it's pretty great."

Later on in 2015, Taylor went on the record to say she was dating a much younger woman...

But left out Paulson's name. "There's a very big age difference between us which I'm sure shocks a lot of people, and it startles me," Taylor said at the time, according to Entertainment Tonight. "But as they say, 'If she dies, she dies.'"

She also opened up about the possibility of marriage in the future...

"I would not do that publicly. My relationship is with a woman, and I have not — given my generation it would not be something that would automatically occur to me. But she's mentioned it because just from a spiritual point of view, from a heart point of view ... as a deed that has a very rich symbolic gesture to it, it has its attraction."

While Taylor never named Paulson at first, it didn't take long for fans to put 2 and 2 together.

After Taylor posted a photo of Paulson in a gown on Twitter with the caption, "When captions fail ... " fans went crazy, and it wasn't long before the press announced their relationship.

Soon after, the couple made it red carpet official.

Paulson was nominated for best-supporting actress in a limited series for her role on American Horror Story: Hotel at the 2016 Critic's Choice Awards, where the couple made their red-carpet debut.

Paulson officially confirmed their relationship! In a 2016 interview with The New York Times, Paulson opened up about her relationship with Taylor for the first time: "My choices in romantic partners have not been conventional, and therefore the idea that it's 'other' makes it compelling," Paulson told the publication.

"If my life choices had to be predicted based on what was expected from me from a community on either side, that's going to make me feel really straitjacketed, and I don't want to feel that … what I can say absolutely is that I am in love, and that person happens to be Holland Taylor."

The pair have been together ever since...

And they seem more than smitten together.

Fans can't get enough of the pair...

i really think holland taylor and sarah paulson should adopt me but that's just my honest opinion https://t.co/ZHGBshw5Rj
— den (@den)1600762836.0

And regularly gush over the happy couple.

But, there's been one downside to going public with this relationship.

...the negativity the stars receive for their age gap.

One search on twitter brings up a plethora of hate comments about Taylor and Paulson.

With many calling out their "huge" age gap, using it as fuel for hate comments.

Paulson spoke out about the comments in an interview with The Guardian over the weekend.

The American Horror Story star admitted that some fans are merely "fascinated" by their partnership.

But she was quick to point out that many of these comments can take a very mean-spirited turn...

"For me, that seems to be the predominant interest in my relationship with Holland, what would be perceived by some as the strangeness of it, or the unlikelihood of it. I think people are fascinated by it, because it's so not typical."

She went on to make a very good point...

"Except for if you look around at plenty of well-known or recognizable couples when they're heterosexual couples, it just runs rampant, and I don't see anybody becoming obsessed by those relationships."

Paulson continued by saying that she's happy if her relationship helps make people feel more comfortable in themselves.

But that she's not overly keen on the conversation that can often surround it. "If it allows for more freedom, in terms of the way people think about what's possible for them, then I'm all for the fandom of it and the excitement around it and the interest in it. "What I don't love, which is sort of a consequence of it being such public knowledge, is that there is discussion about it at all," she added.

Paulson admitted some of the comments are extremely "cruel."

"Believe me, there have been plenty of young people on the internet who have tweeted horrifying things to me about it, and who don't support it and who are so cruel. So it's just a bit of a dance. But one I try to not let into my brain too often."

But it seems the vast majority fans are always quick to rush to the pair's defense.

And are quick to call out any negativity.

Ultimately, as long as Paulson and Taylor are happy together...

That's all that should matter. For more on Sarah Paulson, scroll on to find out why everyone is talking about her new series, Ratched...