She started asking people in Jeremy's area for help. | 22 Words 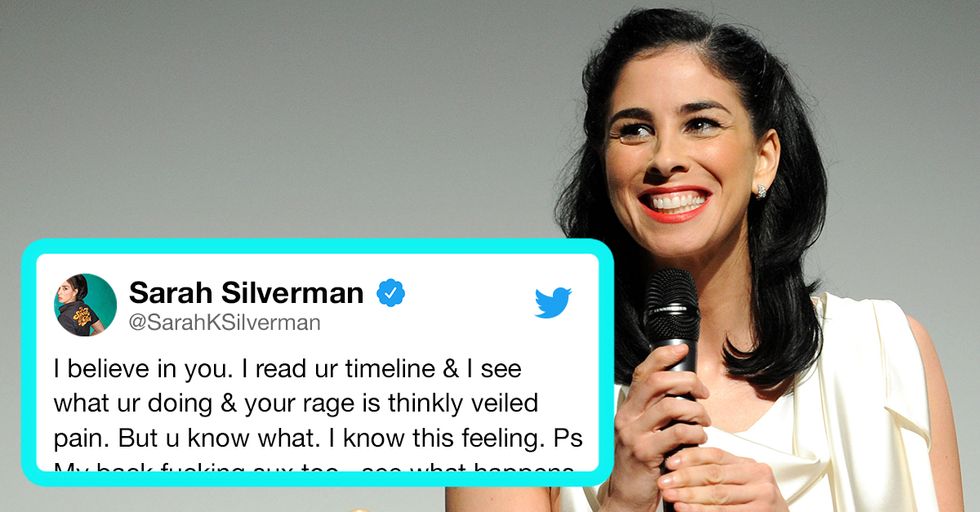 Sarah Silverman Responds to Sexist Twitter Troll With Empathy, and Ends up Changing His Life

Unless this is your very first day on the Internet, you've seen that it can be a pretty horrible place at times.

(If this is your first day on the Internet, welcome! You're gonna love it. Sometimes.)

There are racist trolls, sexist trolls, trolls who just troll for the "joy" of trolling, and crappy opinions that you wouldn't even believe that some people could actually earnestly hold.

But every once in awhile, we read a story that shows us that the Internet isn't a soulless, cold, dark, empty wasteland. Well, it isn't exclusively an empty wasteland, anyway. Such was the case with a story starring comedian Sarah Silverman and a man named Jeremy.

Sarah Silverman is no stranger to the Internet.

She's often serving up her own hot takes along with the other denizens of Twitter. She's also used to dealing with trolls. After all, she's a woman on the Internet! How could she possibly escape them? (No, seriously. How could she? Can someone let me know?)

I've gone ahead and censored Jeremy's tweet here, but you get it, right? Clearly, it didn't take a lot of thought or effort. It was just an insult for a woman on the Internet.

For whatever reason, Silverman decided to click on Jeremy's name and scope out his Twitter profile. Then she replied to his insult with this:

Silverman had no reason to click on the name. It would have been easier to block Jeremy or ignore him altogether. Instead, she showed empathy – a very rare trait both on Internet and just kinda in the world.

Jeremy, for his part, could also have ignored Silverman's attempt at connecting. But he didn't.

@SarahKSilverman I can't choose love. A man that resembles Kevin spacey took that away when I was 8. I can't find p… https://t.co/ZlhiNFbk3v
— Jeremy jamrozy (@Jeremy jamrozy)1514511694.0

He revealed some deeply personal information about why it's so hard for him to "choose love," as Silverman put it. At this point, you're probably thinking, "OK, sure, a celebrity said something nice to a regular guy and they had a moment. But things must have taken a turn for the worse, right?"

Quite the opposite, in fact.

@jeremy_jamrozy I can’t imagine your rage. Just reading that makes me want to do bad things. Stand by
— Sarah Silverman (@Sarah Silverman)1514511869.0

Silverman continued the conversation with Jeremy, again empathizing and saying she understood how he felt. But it wasn't enough for her to just say, "I get it." She didn't just say "Best wishes!" and move along with her life. Having already gone above and beyond, she went above and beyond-er...

She started asking people in Jeremy's area for help.

She also recommended several therapy options to Jeremy. This is so clearly about more than just silencing an Internet troll. Silverman saw a need and tried to fill it.

A few days later, Silverman tweeted out an update and tried to raise money for Jeremy.

Again, this was days after the initial interaction which Jeremy started off with a single (offensive) word. She also made phone calls on Jeremy's behalf to a treatment facility to try to get him an appointment. This is radical empathy, people.

God I feel so overwhelmed with joy tears in my eyes because I'm finally getting the help I need. Sarah Silverman is… https://t.co/5EpIDS4M82
— Jeremy jamrozy (@Jeremy jamrozy)1514590940.0

Jeremy was overwhelmed by Silverman's kindness. It's only too perfect that this entire exchange took place as 2017 (perhaps the most awful year to have ever graced our calendars) turned into 2018 (which is, so far, not too bad).

People are noticing the incredible exchange and it's definitely gotten people talking about how we respond to those who try to hurt us.

@cpicciolini @jeremy_jamrozy I think about it everyday. What you taught me about compassion.❤️
— Sarah Silverman (@Sarah Silverman)1514866698.0

Christian Piccioloni knows a thing or two about choosing love over hate. At the age of 16, he became the leader of a White supremacist organization in Chicago. After renouncing the neo-Nazi movement in 1996, he went on to co-found a peace advocacy organization called Life After Hate. He appeared on an episode of Silverman's show I Love You, America — and his words clearly had a lasting effect on Silverman.

The exchange between Silverman and Jeremy is solid proof that the Internet can be a wonderful place and that sometimes, it's OK to place our face in the good of humanity.

What would your life look like if you responded to mean people with next-level understanding like Silverman did? And what would happen if you responded to a nice comment with rawness and honesty like Jeremy did? Basically, the world would be a better place. Now, let's get out there and choose love, people!