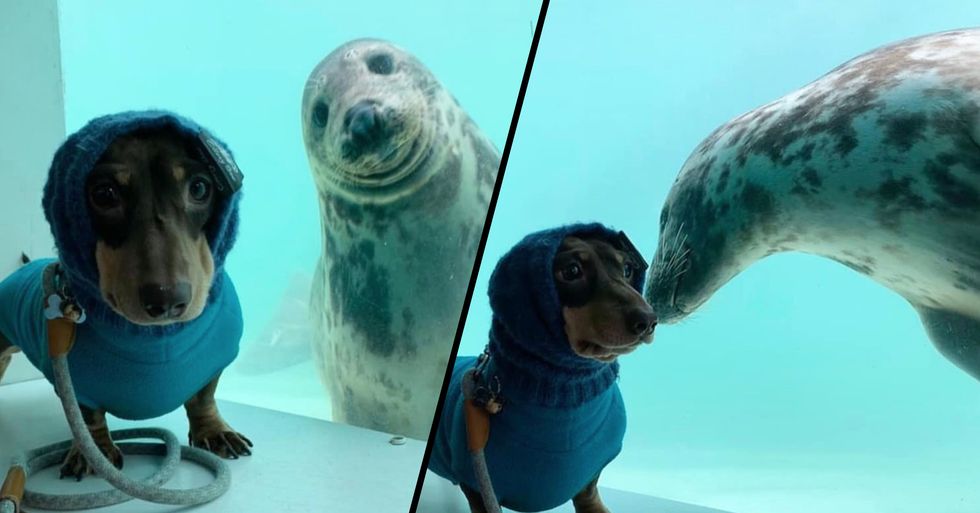 In the latest story in the world of animal news, a sausage dog and a seal have struck up an unlikely friendship, and it is the most wholesome thing you will ever see. I promise.

To see the adorable friendship, and a selection of other unlikely animal relationships, keep scrolling...

There's nothing on this earth that's much purer than the love of our animals.

Well, apart from the love animals hold for each other.

Sometimes, different species of animals will strike up the most unlikely of friendships, and we are here for it all.

Animal friendships are so pure.

So, to kick things off in a suitable fashion, keep scrolling to see a selection of the cutest, and most unlikely animal friendships...

Tinni the dog and Sniffer the wild fox.

Anjana the chimpanzee and tiger cubs.

A chimp, dog and an elephant.

I am a huge fan of these two.

Champy the horse and Morris the cat.

Did you ever think you'd see a two-legged dog and an overly fluffy chicken taking a walk in the snow? It's one of life's simplest pleasures.

And, it's the one we've all been waiting for...

Stanley the sausage dog and Aayla the seal. This incredibly wholesome encounter happened at the Cornish Seal Sanctuary in Cornwall, England.

Stanley and Aayla instantly hit it off.

Aayla is one of the sanctuary's friendliest rescue seals, and she frequently makes friends with the four-legged visitors. While visiting with his owner, Stanley struck up the unlikely friendship, and the pair spent around twenty-minutes checking each other out and posing for photographs.

It turns out this seal is quite the socialite, and regularly makes friends with the dogs who pass through the sanctuary with their owners.

Here she is, saying hello to another pooch...

If only all of us were as sociable as Aayla.

I'd adopt Aayla any day!

But Aayla isn't the sanctuary's only sociable resident...

The penguins love to greet the canines too!

Who'd have thought it? Pugs and sea lions make the best combination! Be right back, just moving to Cornwall...