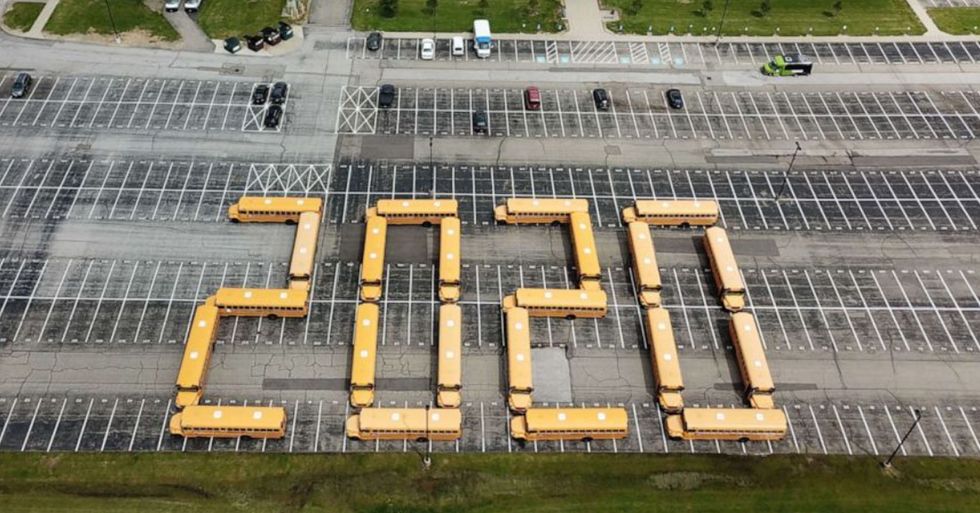 A group of school bus drivers in Ohio have paid a touching tribute to their graduating seniors who are unable to attend graduation this year thanks to the pandemic.

This is so heartwarming...

It's a tough time to be a parent.

Like bringing up children wasn't already challenging enough, the global pandemic has brought us into full lockdown.

The world has literally been brought to a standstill.

In an attempt to prevent further spread of the deadly virus, several world leaders have imposed lockdowns upon their countries.

Most major stores have closed their doors...

And millions of bars and restaurants have been closed for months now, resulting in a huge drop in the economy.

And, on top of all this, schools have also been closed.

All over the world, children have been sent home from school to self-isolate in the safety of their own homes.

And here in America, several State leaders have also enforced closures upon their schools.

Our famous yellow school buses have been ground to a halt indefinitely as our fight against the pandemic continues.

Quite understandably, many parents are struggling with these new sanctions.

As any parent will know, keeping children cooped up indoors for an extended period of time is a recipe for disaster.

And these parents have found themselves doing the very thing they hoped they'd never have to do...

With their children's schools closed down indefinitely...

Parents have been left with little choice but to educate their children themselves.

And it turns out that homeschooling isn't the easiest of tasks...

#IKnewIHadCabinFeverWhen after the first week of homeschooling, one kid suspended, one expelled, and one teacher f… https://t.co/qhpZlDgHjG
— Michael Whennen (@Michael Whennen)1585148036.0

And many parents have been coming forward to admit that they don't make the best teachers.

Things are even harder for parents of teenagers.

Hundreds of thousands of teenagers who were ready to graduate this year have been left studying at home... and let's face it, their workload won't exactly be easy.

But a group of bus drivers from Loveland City Schools in Ohio - which are now closed for the rest of the year - have decided to pay a beautiful tribute to their hard-working graduates who aren't able to be in school this year.

These bus drivers have worked for the schools for many years now...

And many are sad that they're unable to wave goodbye to this year's graduates - some of whom they'd driven to and from school since kindergarten.

The students are very important to these drivers.

"We're the first face they see in the morning and the last one they see before they head home," Lisa Moorhead, a driver of twenty-three-years and the district's courier, told Good Morning America. "We share hugs, they tell us stories and make us laugh. We share a lot with these kids - probably more than people realize."

She explained many of the drivers transported a generation of children whose parents once rode the same yellow buses.

Since Lisa and her fellow drivers are unable to say goodbye to their graduating kids this year, they decided to line up twenty-two of their yellow buses in the shape of "2020" to salute this year's 392 graduates.

And it was truly touching.

The video was posted to the school district's Facebook page...

And it has so far been viewed more than 4,000 times by students and their families, and it's safe to say that they are all equally as touched by the kind tribute.

People were overjoyed by the video...

"This is so awesome and really touching!! Thank you for your dedication!!" one happy parent wrote.

All of this year's graduates will be undoubtedly devastated to miss their graduations...

But kind gestures like these are certain to make their day.

And make sure to keep scrolling to read about how March was the first month without a school shooting since 2002...