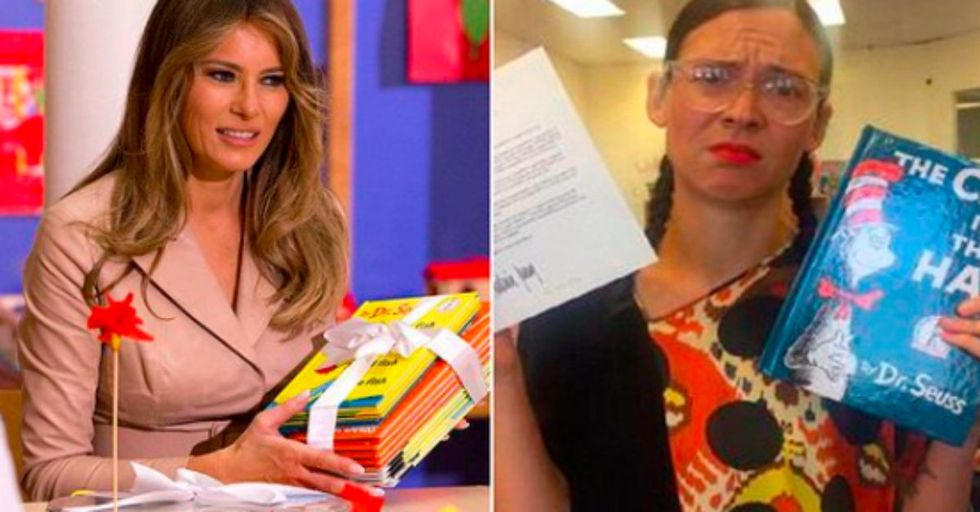 An elementary school librarian in Cambridge, MA wrote a blog post rejecting a collection of Dr. Seuss books donated to the school by the First Lady.

For National Read a Book Day, Melania Trump sent out ten Dr. Seuss books to one school in each state.

She seems to have picked a live one with the selection of Cambridgeport Elementary School.

Melania Trump and books have proven to be a volatile combination.

On National #ReadABookDay I encourage everyone to read a book. Let every page educate you & take you on an exciting journey!
— Melania Trump (@Melania Trump)1504711469.0

When Melania tweeted in support of National Read a Book Day, the reaction from the Internet was swift and overwhelmingly critical.

Now, the First Lady is in the news again for her National Read a Book Day decisions, this time thanks to a fiery elementary school librarian, Liz Phipps Soeiro.

After receiving Melania Trump's donation of ten Dr. Seuss books for her school, Soerio posted an open letter to the First Lady on the Horn Book's Family Reading blog, effectively rejecting the books. "I work in a district that has plenty of resources, which contributes directly to 'excellence,'" she wrote. "My students have access to a school library with over nine thousand volumes and a librarian with a graduate degree in library science ... Meanwhile, school libraries around the country are being shuttered. "Cities like Philadelphia, Chicago, and Detroit are suffering through expansion, privatization, and school 'choice' ... Why not go out of your way to gift books to underfunded and underprivileged communities that continue to be marginalized and maligned by policies put in place by Secretary of Education Betsy DeVos?"

Phipps Soerio, pictured below on the right, wasn't quite done yet.

She then called out Melania Trump's choice in books, writing, "Another fact that many people are unaware of is that Dr. Seuss's illustrations are steeped in racist propaganda, caricatures, and harmful stereotypes." The school district that employs Phipps Soeiro said in a statement that she "was not authorized to accept or reject donated books on behalf of the school or school district" and that she has been counseled "on all relevant policies."

"Giving the books was part of Trump's effort to use her platform 'to help as many children as she can,'" Grisham said, according to The Washington Post. "'Turning the gesture of sending young school children books into something divisive is unfortunate, but the First Lady remains committed to her efforts on behalf of children everywhere." People are coming down strong on both sides here. What do you think?