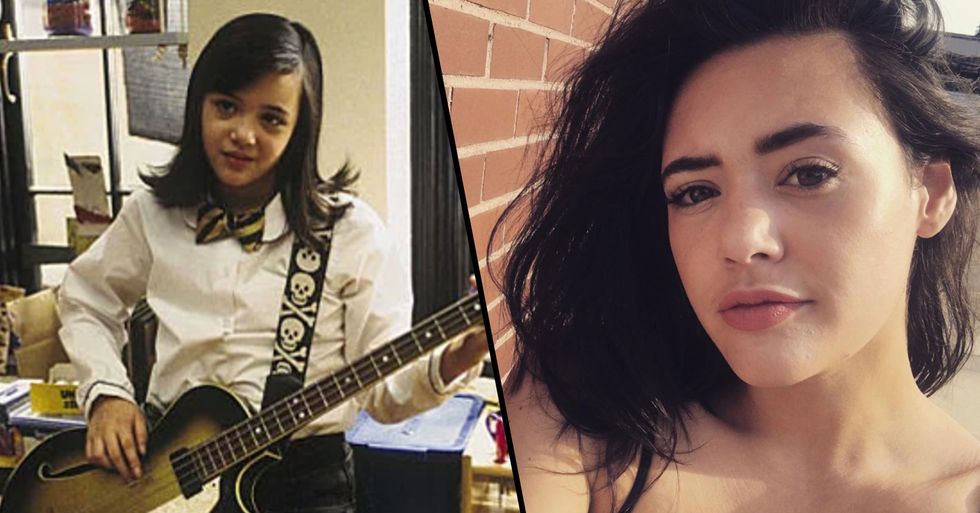 Everyone dreams of living like a celebrity at least once in their life, but despite the luxurious lifestyle, and riches that come with being famous, it can also have some pretty messed up effects, especially on child stars.

Everything got too much for one child actor who appeared in the hit movie School of Rock, and she's finally opened up about the turmoil she faced as a result.

Being a celebrity isn't easy.

Despite what we all think.

It's no lie that fame has it's perks.

And that's what makes the luxurious lives of our favorite celebrities look so appealing.

Although it might seem attractive at first, most people don’t see the negative side.

Especially when you enter the spotlight at such a young age.

While children are young, parents often make the decisions their behalf, leading many into a childhood with undue pressures, causing them to seek comfort elsewhere.

Typically, stars starting at a very young age lose their chance at just being a kid.

With an actor's general workday being 12 hours and running over quite frequently, it takes away any time that should be spent playing and doing more conventional activities.

Many celebrities have opened up about the effects being a child star had on them growing up.

And their experiences are far from the lavish lifestyle we assume...

The pressures of fame prove that stardom isn't all it appears to be.

Sophie Turner, who plays Sansa Stark on Game of Thrones, broke down in tears as she told a podcast how she was overwhelmed by her sudden fame, and even considered suicide as a result.

She became fixated on the criticism she received from trolls.

Who called her “fat" and “a bad actress." All their comments resulted in her becoming very self-conscious. As the depression developed, she “had no motivation to do anything." But she's far from the only one...

The well-known American singer and actress, Demi Lovato, has delved into her own personal experiences.

She admitted that she “definitely felt the pressure increase when the fame started to creep into [her] life."

Her manager confirmed that “so many more expectations were put on her than a normal 15, 16-year-old girl would have."

Starting at a young age, she felt pressured to look a certain way, and eventually the pressure to succeed got too much, leading her to self-medicate with alcohol and cocaine.

But not all child actors suffer the same fate...

As we all know, Joseph Gordon-Levitt was pretty successful from a young age, despite his brief stint furthering his education, he quickly came back with a bang, and is one of the most successful child actors who has remained in the spotlight.

How can we not mention Emma Watson!

Watson took on the role of Hermione Grainger at the age of eleven but has become a very well-rounded star in the years since. Off-screen, she has been working tirelessly as a feminist activist with the United Nations.

While there are more child stars who have managed to lead a pretty normal life after fame, sadly all too often this isn't the case.

But one movie you wouldn't expect to cause problems is School of Rock.

This is a movie we all know, from child to adult, you can't help but love this fish-out-of-water comedy.

And it's not just Jack Black that makes it so great.

It's the class of elite elementary school students finally finding their feet that brings everything together.

Sadly life didn't imitate art for one young actress, and she's finally opened up about the struggles she faced.

School of Rock star Becca Brown has recently shared her battle with alcohol and drugs, opening up to fans about how the movie controlled her life.

She played the role of schoolgirl, Katie, and nearly seventeen years on, she is only just getting to grips with the onslaught which followed into her teenage years.

Becca explained in her blog Mamamia.com, that she suffered with her body image and anxiety due to bullying brought on by her role in the movie.

In her blog, she wrote: "At school, I was shy and weird, so I was bullied immensely and constantly felt like an outsider. In addition to all that, my parents were classic covert narcissists. They were emotionally manipulative, sometimes physically abusive and both struggled with disordered eating and body dysmorphia."

As a child, she felt she didn't have anyone to turn to.

"All of this gave me extreme imposter syndrome, crippling anxiety, and body image issues from a super young age. I went home to Chicago, and because kids are ass*****, I was bullied even more when I came back to school," she continued.

Although she loved the experience of appearing in the movie, it wasn't worth the world of hell she was subjected to on her return.

"I thought of all the awful comments on the message boards, the bullying, and the shame of being sexualized as a 10-year-old. From the age of 14, I used drugs, alcohol, sex, food, and self-harm to numb all of this pain. I’ve survived dozens of toxic relationships and three suicide attempts. I’m not saying all of this is because I played bass in a movie when I was a kid, but because I spent over a decade terrified that I’d peaked at 10 years old."

Despite having to battle great turmoil, Becca emerged stronger and has managed to pull herself back from the brink.

The child star now lives in Los Angeles and works for a skincare company. She still performs and even managed to travel around the US as a stand-up comedian. If that isn't determination, I don't know what is. Becca signed off the blog: "I’m grateful that School of Rock happened. It’s a great film and it was, to its core, a fun experience." To find out how Harry Potter star Daniel Radcliffe dealt with his rise to fame, keep scrolling...