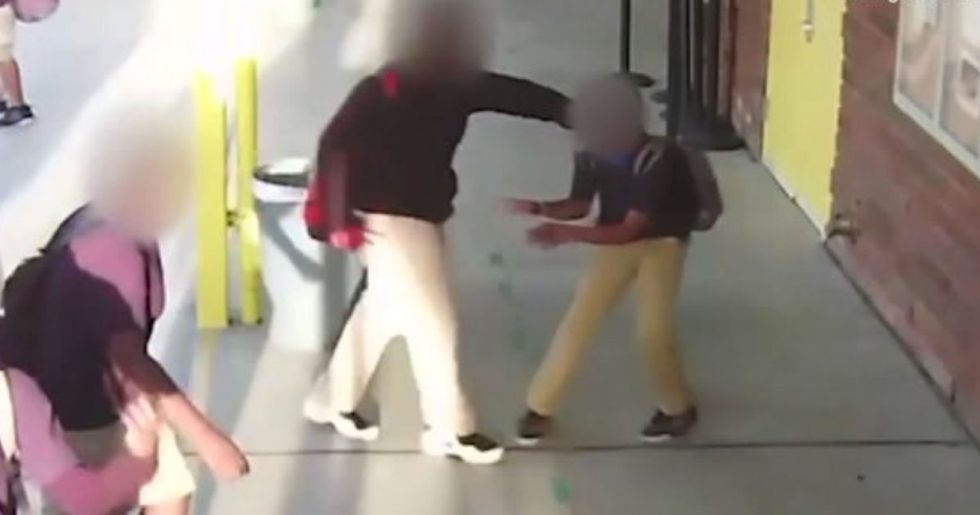 For most people, middle school is a time of stress, insecurities, and social pressure. Trying to fit in with the "cool kids" while simultaneously trying to study for midterms is a pretty difficult task, you know? If I think about it, it's probably the hardest thing I've ever had to experience. And for all the lucky ones that have also managed to survive the ordeal, props to you. At least you never have to go back.

It seems as if times have changed since I was at middle school, but one thing that remains constant is bullying. Every generation has its own set of terrorizers who want to make everyone else's lives harder. And, recently, a video of a horrific bullying incident has emerged and has resulted in some serious injuries. And it occurred in a school funded by Bill Gates!

Keep scrolling for the full-length video as well as what the school had to say on the matter...

Over the past few years, Bill and Melinda Gates have been funding local schools all across the country.

The Bill and Melinda Gates Foundation has been trying to improve education in some of the poorest schools throughout the nation.

The initiative aims to give those from impoverished regions a chance.

Last year, the foundation announced that they were planning to donate 100 million dollars to nineteen projects for improving middle and high schools in poor communities across thirteen states.

The move came as critics said that foundations weren't working...

This is primarily because of the trial-and-error method that is often used when approaching these kinds of projects. Gates aims to be "less prescriptive" than those that haven't not gone down well with some educators.

"We're not inventing anything in this strategy. We're taking what we learned from research and experience."

Since the introduction of Gates' funding, more minorities and low-income students have been able to advance in their education.

By increasing funding, he has also increased the number of black, Latino, and low-income students who earn a diploma and enroll in a postsecondary institution.

One of the schools to receive a significant amount of money is Animo Westside Charter Middle School in L.A.

According to reports, the school as received millions in funds from Gates' foundation in order to improve the quality of education for their students.

However, this is not the main reason that the school has hit the headlines this week.

Instead, the institute is being slammed for its approach to dealing with bullying incidents that take place within its grounds.

And now, because of one particular incident that was caught on video, the school is being sued.

As reported by TMZ, the footage, which is extremely difficult to watch, has sparked national outrage towards the bully as well as the school's staff. I must warn you that some viewers will find the video distressing.

In the video, you can see the boy walking amongst other students...

When, suddenly, he is grabbed by one of them. The footage shows the twelve-year-old jumping in shock and then trying to back-away with his hands held up.

But the bully, who is much bigger than him, still has a hand clasped firmly on his collar.

He then proceeds to punch the victim in the stomach, which makes him double over in pain while trying to protect the rest of his body.

The bully continues to torment the student by putting him into a chokehold that lasts almost twenty seconds.

The worst thing about this entire thing is that a staff member walks past...

And, after seeing the incident, she doesn't say a word. She simply walks off as though a boy isn't being beaten a few feet away from her.

Instead, other boys went over and managed to convince the bully to let him go.

But the damage had already been done by then. The victim's body goes limp as he falls to the ground, trying to catch his breath.

The other boys, including the bully, watch as he struggles to breathe.

You can see the levels of concern growing the others' faces. And, weirdly, the bully goes over to make sure that he is alright. He then helps the injured student inside so that he can get a drink of water. Often, bullies don't realize the extent of the damage that they cause until it's too late.

I don't think that he realized how much damage he had inflicted...

The boy goes limp again and then, apparently, loses consciousness. A member of staff takes him into an office, where he remains unconscious on the floor. She closes the blinds while someone else calls the paramedics.

The victim's mother has spoken out about the incident, claiming that her son "is not the same anymore."

She has also hired an attorney who is now suing the school. The lawsuit outlines details about the incident seen in the footage. It also highlights the permanent injuries suffered, and you wouldn't believe just how severe they are.

According to the family, the boy has permanent brain damage.

He suffered a hypoxic-ischemic brain injury which is a lack of oxygen to the brain. He now has significant learning disabilities and will most likely need treatment for the rest of his life. I bet the bully didn't think that this would be the outcome of a twenty second chokehold.

However, the mother emphasized that she didn't want to press criminal charges...

She believes that he is just a "mere boy" but, in the lawsuit, he is referred to as a boy who "continues to pose a threat to the safety and lives of other students." Her anger is justified, and she has asked for him to be expelled from the school.

TMZ reached out to the school for a statement about the entire incident and this is what they had to say.

A person who represents "Green Dot," which is the board that Animo Westside Charter Middle School is registered under, said that they couldn't make comments on the lawsuit, but has re-iterated their values.

They talked about their standards on the issue of bullying.

"We take seriously the safety of all our students and quickly address bullying of any kind on our campuses. A core value of Green Dot Public Schools is to demonstrate the utmost respect for the communities we serve, including all of our students and their families."

"This value is central to how Green Dot approaches incidents of bullying: We treat each other with respect and do not tolerate bullying in any form. We are committed to supporting our students as they reach their innate potential to achieve their goals and succeed in college, leadership, and life."

Bullying should not be tolerated in any institute.

Though it seems to be a common aspect of middle school life. 1 in 5 students report being bullied throughout their teen years and, with the introduction of social media, cyberbullying has now also taken a permanent position in our society.

The problem may be extremely difficult to deal with...

Handing out harsh punishments to bullies, who are ultimately children, is difficult. Do you teach them the life lesson the hard way, or give them a chance, because they're too young to understand the extent of their actions?

When actions lead to severe injuries such as the ones suffered by the victim in this case, does the bully deserve to be punished just as severely?

Here's the full-length clip of the incident.

If you can commit the crime, you deserve to do the time. But that's just my humble opinion. This isn't the first time that a school has been called out for the way that it deals with bullying. One student spoke about his high school experience in his graduation speech and the way that the school handled it has been slammed online. Keep reading for more on that.