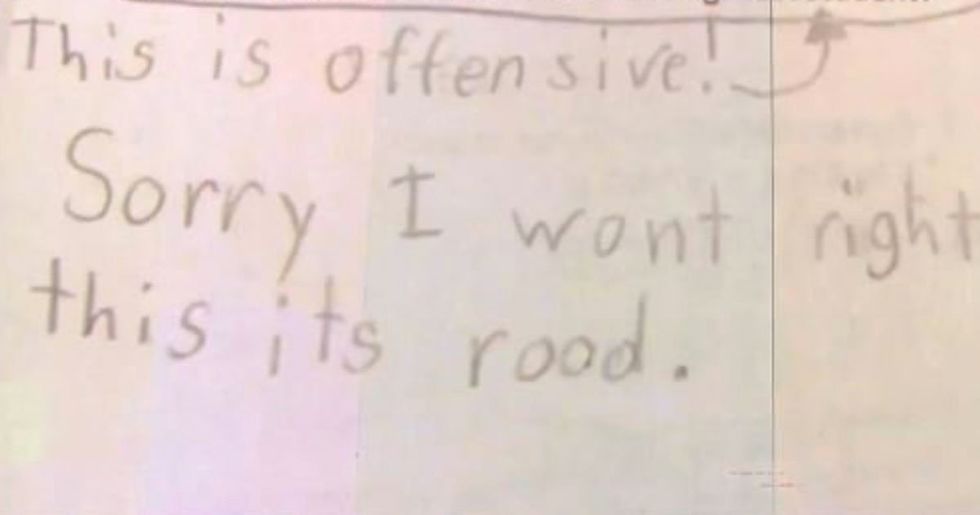 Let's be real, nobody really enjoyed doing homework now, did they?

When school is out for the day, all kids want to do is go home, play with their friends, and not think about school work. But homework was, and still is, that one thing that continues to ruin our evenings.

But when it comes to doing homework, the last things students would expect to see are offensive questions.

One young girl from Utah called out her teachers for an offensive homework question, refused to answer it, and even wrote a note as to why she didn't want to solve the problem. Keep scrolling to find out more...

Nobody ever really enjoyed homework...

Because, let's face it, who wants to be doing homework after an entire day at school?

But despite homework being ever so boring...

It has been proven to be vital in a child's education.

Many argue that homework is essential for building a successful adult.

Completing homework is beneficial for a student's sense of responsibility, time management, organization, learning how to work alone, and, most importantly, homework allows teachers to see how their students are performing outside of the classroom.

But many have argued against homework...

It has been argued that children need the time to disconnect from school life and socialize with their friends and family.

Yet homework has been considered important enough to remain on curriculums all around the world.

And homework can be completed in a mere hour every evening after school, so it is completely do-able... unless the dog eats it, of course...

Homework likes to use the most random of scenarios to test its students.

Who remembers the ridiculous math questions that would involve imaginary characters sharing out a bag of marbles? Homework is known to be "creative" in an attempt to be fun, but it never really worked, did it?

The most bizarre question was shared recently by a student in Utah...

10-year-old Rhythm Pacheco, from Salt Lake City, Utah, noticed a question in her math homework that was rather unorthodox. The question read: "The table to the right shows the weight of 3 Grade 4 students. How much heavier is Isabel than the lightest student?"

The question obviously stunned its students.

The mere fact that whoever wrote the question felt it was appropriate to compare children's weights is astounding, and Rhythm certainly felt this way.

Rather than staying quiet, Rhythm decided to speak up about the matter.

In her best efforts, she wrote in the answer box: "What!! This is offensive! Sorry, I won't right [write] this it's rood [rude]."

Rhythm felt it necessary to write a personal note to her teacher, which read: "Dear Mrs. Shaw, I don't want to be rude but I don't think that math problem was very nice, because that's judging people's weight. Also, the reason I did not do the sentence is cause I just don't think that it's nice. Oh, and the problem is page thirty-four, number 7. Love: Rhythm."

The fact that a 10-year-old is aware of the problem says it all...

Rhythm knows well enough that young girls' weights should never be brought into the equation as they are completely irrelevant to a child's education.

The math question has been branded "irresponsible"...

Rhythm's mom, Naomi, spoke to Fox 13 News, saying: "It's such an irresponsible way to teach children how to do math!"

Rather than comparing apples and oranges...

Girls shouldn't be comparing themselves to each other...

"I thought it was offensive," Rhythm explained when asked about the question. "Girls shouldn't be comparing each other and I know it was a math problem, but I didn't think that was really okay."

Naomi has credited the teacher for being so responsive over the matter...

"Her teacher was so responsive and spoke to her about it, and supported her decision," she said about Rhythm's teacher.

Naomi wasn't the only one to praise the teacher...

The Murray City School District’s communications and public information specialist, D. Wright, told TODAY that they are pleased how Rhythm’s teacher handled the situation in such a positive manner, praising the teacher in question for being "sensitive, supportive and understanding."

This is the first time a student has spoken out over these types of questions...

The curriculum program responsible for the question, Eureka Math, said they had never received this type of feedback before and explained they use both boy and girl names in their problem sets.

The situation is being taken seriously.

The program's creator, Chad Colby, said in a statement: "User feedback is a vital part of our culture. We are grateful to receive constructive feedback from students, teachers and parents alike. We apologize for any discomfort or offense caused by the question."

The question is planned to be replaced completely.

"Please know that we will replace this question in all future reprints, and suggest that teachers supply students with an appropriate replacement question in the interim," Colby went on to say.

To keep reading about the lengths that schools will go to in the name of education, keep scrolling to learn about how a school in France has completely banned mobile phones for children aged under fifteen...