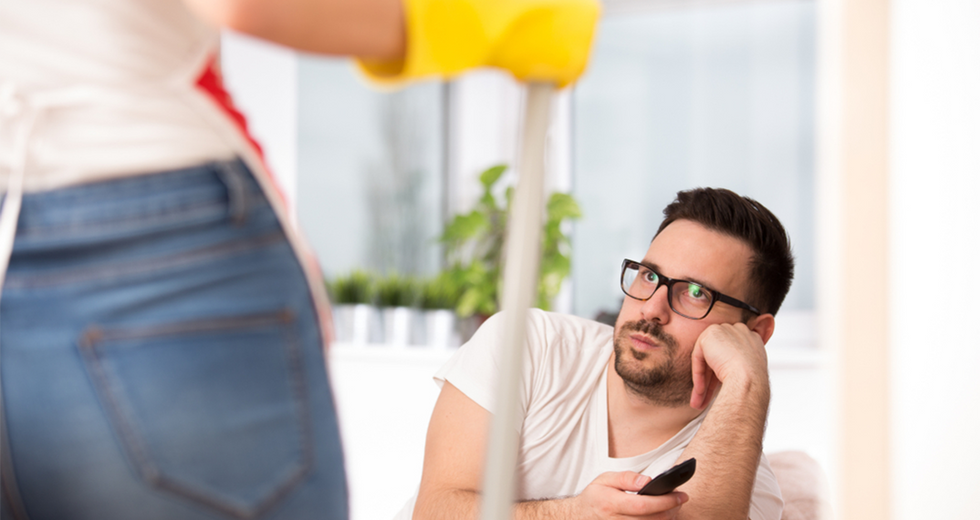 Science Proves That Husbands Are Big Babies That Cause Wives Stress

As if we needed a study to prove this. The truth is most women with a male partner don’t need science to tell them that their boyfriend or husband is a big baby. They've been talking and joking about it for years. But thanks to science, we now have evidence to back our claims, mom stress more over their husbands than they stress over their kids.

Our partners don’t need as much as our children do, but they do contribute to another variety of household stress. Like, not helping with cleaning, cooking, or organizing. And let's pray that he does not get sick and catches the "man cold"  which makes him much less helpful and just as dramatic as a toddler.

In what comes as a surprise to absolutely no woman ever, Today found that the vast majority of moms rate their overall stress level at a shocking 8.5 out of 10. For all of us moms that have been saying this all along,  it’s quite comforting to now be able to say “I told you so.”

Moms say that the fathers of their children are like big kids rather than equal partners.

When we’re not able to see eye to eye with our partner about the daily household routine, this causes more stress.

This is probably where the term man-child or man-baby originated.

According to TODAY, 75 percent of moms said they always feel the need to do all of the household and parenting chores.

I would say the number could be higher, but this sounds about right.

These moms felt that if they don’t get the work done, then it won’t get done at all.

Where is the lie?

1 in 5 moms also said they feel stressed all the time because their husbands simply don't help them with any household chores.

And it just seems that for these moms, their husbands make their job a lot harder.

Moms left shocking, but not surprising, anonymous comments about their mom stress caused by their husbands.

Reading through some of these was frustrating yet all I can think is, "same girl, same."

"I am exhausted emotionally and physically when my husband comes home. He feels like another job."

Laundry thrown on the floor and crumbs of food left on the kitchen counter is something this mom probably finds her kids AND husband doing.

"Even though I have a committed spouse, I still feel like all the pressure is on ME to get everything done. I work just as many hours as my husband does, but yet I do all the scheduling."

Moms take on a a lot of work. It's time we divide some of that with husbands.

"He gets all the time he wants and I get none. I can't even take a relaxing bath without my husband bringing the baby to me."

Men, you can Google what moms have to Google when it comes to taking care of babies.

Sure, not everyone’s husband or boyfriend fits this mold but the fact that so many women are feeling this way means that some things have to change.

We'll have to repeat this a few times because the men probably aren't listening. Typical.

Guys, you have to pull your weight around the house.

Do things without being asked to do so.

Trust us, we will definitely appreciate it.

It’s like one of the best things for us at home.

And don’t worry, we will verbally tell you that you did a great job.

And hopefully, you can continue to help out around the house.

Perhaps be like this guy that did a bunch of chores at home and told his wife about it via “sexy texts."

There is something sexy about a man helping out with chores. Let's not forget the sexy Mr. Clean Super Bowl ad from two years ago. As odd as the ad was, it hit the nail on the head about how sexy it is to see men doing chores. Also, cleaning can be fun and if you're really creative, you can post about it on social media and go viral.

A lot of men can be better at helping.

Take it from all of these moms who tweet how they’re feeling about their workload and not getting help.

Men, listen up... figure out where things are in your house.

The amount of time moms will spend looking for everyone else's things is basically sleep lost.

Cleaning is a team effort. Help mom out.

Pretty much no one can live in the house after it's cleaned. Because as soon as the kids and husband get home, it will be messy again.

I heard someone once say that the story of Cinderella is motherhood but backwards.

I'm just sitting here folding laundry and waiting for my fairy godmother to arrive with margaritas and a vacation package.

Proof that dads do know that certain chores need to be done.

I mean, we pretty much know they choose to ignore them but now we have this tweet and the science to prove it.

Guys, it's relaxing and also sexy.

There is no better sound than dishes getting cleaned and put away, by someone else. Maybe the sound of laundry being folded competes for the top position.

We've already put in the work, you can do this.

Be a husband for a day? That sounds like a vacation.

Keeping up with the chores at home is a big deal. But another thing men are terrible at is handling being sick, or as it's notoriously called, coming down with the “man cold."

It’s like they feel like dying and are completely helpless.
Meanwhile when mom gets sick, it's just another day.

Basically, when a man has a cold, a headache, or any illness or injury, he shuts down. If this were mom, nothing would happen. Everyone will still be on schedule, fed, and bathed.

It's funny because it's true.

Imagine a man dealing with a slight period cramp. That is also why men do not have babies.

Basically, it gets this dramatic.

I might even start a TV fundraiser on my local channels.

We pretty much have to just laugh at how dramatic men are when it comes to dealing with a man cold.

I feel this deep down in my soul.

Because it is so true. It's incredible how quickly things go haywire when mom is too sick or unavailable to make sure things are in order for the family. This is why slowly but surely, men need to step up and we have to get the kids to do the same.

Moms already have enough on their plates and we shouldn't have to stress overgrown men who should know better.

For any man reading this, take some Vitamin C and go empty the dishwasher.