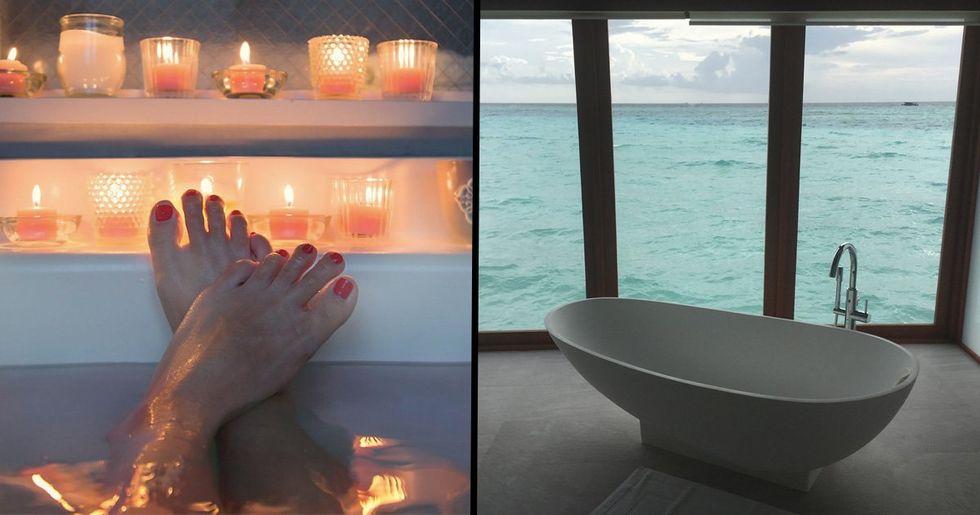 Science Says Hot Baths Burn as Many Calories as a Run

Guess what? You might be able to substitute that long, tiring run for a hot bath! According to some new research, the two may, in fact, burn off the same amount of calories.

Researchers have also discovered that a hot bath is beneficial beyond just burning calories. Baths may have a few perks in common with physical fitness. Now, there are still benefits specific to exercise– it does more than burn off calories after all. But in a pinch (especially when you'd have to shower anyway after a run), a bath might do the trick. And either way, now you've got another trick in the book for improving your health!

Keep scrolling to find out just how a hot bath can help you.

Especially in the winter!

It's pretty much the most painful time of year to go on a run.

Nevertheless, it is good for you.

And eventually, the heat you generate while running will make any cold more bearable.

We're all fairly well acquainted with the basic effects of running regularly– you build up both muscle and stamina.

And then there's the runner's high.

Runners also benefit from a boost in mood, from the endorphins their bodies produce while running.

Basically, the more you run, the more your body burns off fat and gains lean muscle. And as your body gets stronger, it also benefits from an increased metabolism, better bone density, and a boost in overall health.

Here's how running helps you to lose weight:

When you combine running with a balanced diet, the runs will result in a calorie deficit. Thus, the energy you expend while running will burn away fat.

As you run, you also develop greater endurance– and that allows you to maintain the exercise for longer periods of time.

Greater endurance has benefits beyond running.

Building endurance allows your muscles to more efficiently create energy. So it's a good thing to have endurance, and therefore more energy, no matter where you are or what you're doing!

Raising your heartbeat consistently (i.e. through running) strengthens the muscle, and its ability to pump oxygen around your body.

Here's where baths come in!

New research has suggested that, when it comes to health, a hot bath may be just as effective as a run.

The news comes out of Loughborough University.

Dr. Steve Faulkner, a researcher at Loughborough, has concluded that hot baths may even help prevent type 2 diabetes.

Many cultures have emphasized the benefits of a hot bath.

But recently, science has begun to reveal how "passive heating" improves health– as opposed to getting all sweaty from a workout.

Here's how the study went:

Dr. Faulkner and his team investigated "the effect of a hot bath on blood sugar control (an important measure of metabolic fitness) and on energy expended (number of calories burned)."

14 men took part in the study and enjoyed an hour-long soak in a hot bath (40˚C). That equals to about an hour of cycling.

The goal was to raise the core body temperature by 1˚C over the course of an hour. The team measured how many calories each man burned their sessions. They also measured their blood sugar for 24 hours after each trial.

And here's what they found:

According to Dr. Faulkner's study, "The overall blood sugar response to both conditions was similar, but peak blood sugar after eating was about 10% lower when participants took a hot bath compared with when they exercised."

Baths also had an anti-inflammatory response.

The anti-inflammatory response after a bath was very similar to that after a person exercises.

According to Faulkner, "The anti-inflammatory response to exercise is important as it helps to protect us against infection and illness." This protects the body from chronic inflammation, which is associated with a reduced ability to fight off disease.

And that's how baths help keep away diabetes.

"This suggests that repeated passive heating may contribute to reducing chronic inflammation, which is often present with long-term diseases, such as type 2 diabetes," Faulkner wrote.

This is all pretty new.

Passive heating hasn't been a recognized field of research for very long, but it's already offered some promising results– beyond even this study! For example, a 2015 study out of Finland suggested that frequent saunas can reduce the risk of having a heart attack or stroke (of course, the test subjects were again all male).

The University of Oregon further proved that point.

The next year, the University of Oregon published research suggesting that hot baths can lower blood pressure. And they didn't stop there!

This study revealed that passive heating raised levels of nitric oxide (a molecule that dilates blood vessels and reduces blood pressure). This circles back around to a previous point, as it has implications for treating high blood pressure and improving circulation in people with type 2 diabetes.

Yet another study examined passive heating.

And this one compared the intensity of heating from water immersion to that of running on a treadmill. Water immersion actually led to a greater increase in heat, and consequentially a greater reduction to blood pressure.

That makes the concept of "passive heating" even more promising.

Further study is required, but a reduction in blood pressure means a reduced risk of developing heart disease. So passive heating may well be a factor in staying heart-healthy.

And the results of the study showed a promising boost in metabolic effects, like maintaining control of blood sugar. In the study, participants with type 2 diabetes underwent hot tub therapy for 3 weeks. At the end of it, they showed improvements in body weight, blood sugar control, and a reduced dependence on insulin.

Scientists are trying to identify the exact means by which passive heating leads to health benefits.

A current theory lies with heat shock proteins, or "molecules that are made by all cells of the human body in response to stresses." Researchers have noted a rise in heat shock proteins after both exercise and passive heating– which could mean they're close finding the key to blood sugar control.

Basically, this could be important in day-to-day life.

As we mentioned, of course, regular exercise is good for you. But if you're having a busy time and can't get to it, then a hot bath may be a suitable substitute! Share this scientific marvel with your friends!