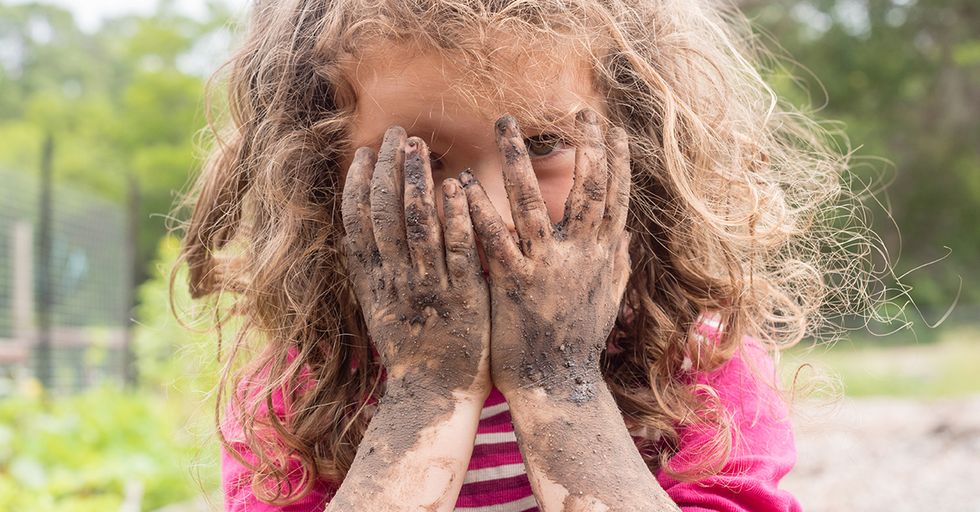 Scientists Say Dirt and Grime Is Healthy for Your Kid — Yes, Really

If I remember correctly, "mud pie" was one of my specialties when I was a kid. I loved playing in the dirt. My grandma had an open field next to her house and my cousins and I would literally play in it all day.

It was the '80s and things were a bit more relaxed. We only showered if we were visibly dirty and hand sanitizer didn't exist. In the summer, we lived outdoors from sun up to sun down. We were in the pool, on our bikes, or playing kickball in the street. Very rarely were we indoors.

Life was good in the '80s — it seemed moms had less worry. But, nowadays we are more aware of the dangers like cigarette smoke exposure, car seat safety, and red dye #40 can bring. We are too aware. We wouldn't dare let our children drink from the garden hose as our own mothers did. But maybe we should?!

This saying is very true as we are learning. And dirt has been around since the beginning of time.

Ever wonder what dirt is actually made of?

A whole lot of “stuff" such as rocks, sand, clay, and organic matter. But also, animal droppings. Ewww!

Researchers are saying that playing in the dirt is really good for kids!

In studies of what is called the hygiene hypothesis, "researchers are concluding that organisms like the millions of bacteria, viruses and especially worms that enter the body along with “dirt" spur the development of a healthy immune system."

Furthermore, exposure to dirt and worms can HELP the immune system.

Studies suggest that worms may help to "redirect an immune system that has gone awry and resulted in autoimmune disorders, allergies, and asthma."

That's not to say that kids should EAT worms.

Just that it is OK for them to play in the dirt and not wash their hands before dinner.

But if little Timmy tells you he ate a worm...

Don't freak out! It ain't going to hurt him at all.

After all, every 'Fear Factor' episode included participants eating some type of bug.

And most viewers cringed every time. But maybe it's all in our heads? Worms are beneficial to us! Who would've thunk?

In some parts of the world, bugs are a delicacy.

Are Americans too uptight?

Probably. But hey, just because something is good for us doesn't mean we'll eat it. Bone broth is said to have enormous health benefits but that stuff is just nasty.

Just think about how many things a baby tries to put into his mouth.

While some things can be a choking hazard — and should be kept out of reach — it's actually beneficial for a baby to be exposed to germs.

And by nature, babies have an innate desire to reach for germs.

For good reason, Mama! This is an instinctive behavior to help baby develop an immune response to everything in his environment.

If your baby takes a pacifier, think of how many times that dang thing falls to the ground.

No need to use a "paci-wipe" to clean it. Just use the five-second rule. Or as you see some moms do, stick in their mouth to clean, then give to baby.

Dr. Joel V. Weinstock, the director of gastroenterology and hepatology at Tufts Medical Center in Boston, said in an interview that the immune system at birth “is like an unprogrammed computer. It needs instruction."

Children who are raised in an uber clean environment are at a disadvantage.

One leading researcher, Dr. Joel V. Weinstock, the director of gastroenterology and hepatology at Tufts Medical Center in Boston, says that "children raised in ultra-clean environments are not exposed to the necessary organisms that help them develop appropriate immune regulatory circuits."

That's not to say we should live in filth.

Like the germ-filled environment of the 1850s. "But if we properly understand how organisms in the environment protect us, maybe we can give a vaccine or mimic their effects with some innocuous stimulus," says Dr. Elliott.

Some researchers believe internal worms can improve the health for those with certain diseases.

In certain parts of the world, studies suggest that being infected with certain types of worms in the body, such as whipworm, can temper the effects of multiple sclerosis and other autoimmune diseases.

Are we too clean nowadays?

Researchers say that it IS possible to be too clean. So go ahead and fire your housekeeper and save yourself some extra money.

As we know, kids should wash their hands, but only in moderation.

Like after using the restroom or before eating. But other than that — don't worry so much. Germs will help them develop healthier immune systems.

It has been said in the past and now in this article, there is no evidence of the benefits that anti-bacterial soap provides. In fact, it may harm us.

This is good news for us parents.

Because kids are gross by nature. And often times we want to douse them in bleach, but we need to just let them be the dirty little people they wanna be.

While this information may seem counterintuitive for some parents, the science is there to prove it.

So, "let kids be kids" as the saying goes. And let them roll around in the dirt until their heart is content.

It is found on us, inside of us, and bacteria is good for overall health. The reason we eat yogurt is to get the good bacteria — known as probiotics — into our guts.

And maybe consider adopting a cat, dog, or both?

Kids love to have a household pet. And having kids exposed to the germs a cat or dog can bring into the home is surprisingly good for them!

Dogs and cats are dirty in general.

And while some non-animal lovers think pets are dirty, children who are raised in a home with cats or dogs tend to have fewer allergies.

And if you live on a farm, whoa, you are likely to be exposed to many organisms.

Those organisms are all beneficial to you and your kids' overall health.

Keep in mind that not all germs are created equally.

Kids love playing in ball pits and if your local McDonald's has one, surely your child has played or always begs to play in it.

The germs that grow in these pits are NOT good for our kids.

Unlike the bacteria that comes from dirt, the germs found in these enclosed areas (ball pits) can be serious, such as E. Coli. Most of these indoor pits rarely get cleaned.

But kids love these things and beg and plead to play in them.

If your kids MUST play in the pit, ensure their hands are cleaned with soap and water after. Maybe even wash them twice, for good measure.

But take a chill pill the next time your kid is running barefoot outside.

You can always wipe their feet down before they come into the house, so your carpets aren't ruined. But let them do it!

And if they ask you to join them in making some mud pie... go right ahead.

And maybe even encourage them to take a bite of their concoction. It will be a natural immune booster for them — and you!