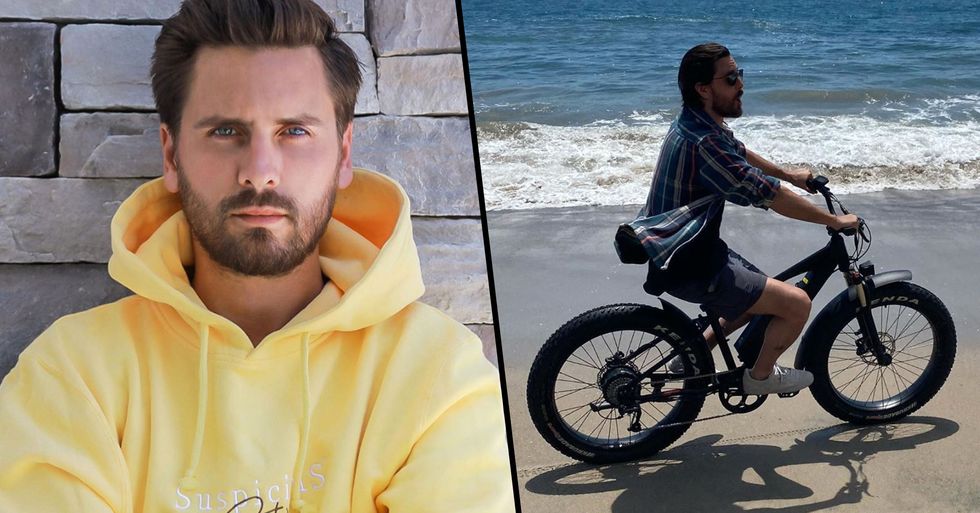 Scott Disick is a somewhat polarizing public figure. Some people love him for his larger-than-life personality and constant bemusement at the Kardashian/Jenner antics, while others find him to be a rude egomaniac with too much money and little-to-no actual talent.

And while Disick is no stranger to controversy, he's made the headlines unintentionally this time after he posted a very controversial photograph to his Instagram.

Scott Disick is not one to stay out of controversy.

This infamous 2010 episode of KUWTK included a scene that's difficult to forget: A ridiculously drunk Disick getting deliberate with an innocent waiter for unknown reasons and then proceeded to shove a wadded up $100 bill down his throat. Classy!

Or the time he punched a mirror in Miami...

During a disagreement with then-girlfriend Kourtney about smoking pot in their apartment, Disick's anger got the best of him and he smashed a mirror to pieces. The incident was featured on Kourtney and Khloe Take Miami, leaving many fans to wonder about Scott having an anger problem.

Oh, and let's not forget the countless times he cheated on Kourtney, the mother of his children.

Not only is it totally gross that a then-thirty-three-year-old man would date a teenager (she was 19 at the time), but Scott also thought it would be a good idea to fly Bella Thorne to France for the sole purpose of getting wasted.

And remember that time he invited a random woman on the family vacation?

The Kardashians invited Scott on their family vacation even though he and Kourtney had broken up in order to make him feel included. But he invited a mysterious woman named "Chelsea" to come without consulting anyone else.

Then he also forgot his daughter's birthday...

Okay, this one is just plain sad. In July of 2016, Scott's adorable daughter Penelope turned 4 years old. She celebrated in typical 4-year-old fashion, with a giant party in the Bahamas. But there was one important person missing from the festivities – Scott Disick,  who also failed to post anything on social media about the day.

He hasn't had a good relationship with Instagram, either.

A few months ago the social media star was called out for posting what was described to be a "racist" post but after that died down, he's been pretty quiet.

In homage to Earth Day, Disick decided he would post a photograph of himself on a bike.

That part wasn't the issue...

Well, not completely... Read on to see the reason why his fans are actually outraged.

He captioned the post: "Earth day at its finest on my @juicedbikes."

While some were angry that he was flaunting his money, as Juiced Bikes aren't cheap, others couldn't help but focus on the setting...

Because he was at the beach, people accused him of being "selfish."

Little did they know, he and his family weren't trying to cause harm with the post.

And other users just emphasized how nice it must be "being rich" during quarantine.

"Scott there are people that are dying," another person wrote under the post.

But when a user decided to call him out for disobeying the rules, he bit back...

“Aren’t you supposed to be inside? Or, is that your private [beach] since you’re so rich?" the follower asked, to which the reality star simply replied: “It’s a private beach."

He later posted this photograph of himself to try and smother the flames.

But that didn't help his case too much as the hate kept rolling in...

Sofia Richie, Disick's current girlfriend also posted some pretty snaps of her enjoying her day out on their "private beach."

The pair have been quarantining together during the pandemic.

A source told Life & Style that it's been a nice change for the couple and it has dramatically improved their relationship.

“They’re used to having a full house of friends, personal trainers, etc. and just a lot of chaos. They’ve slowed down so much that I think that when this is over they may appreciate each other more than they did before."

Here's the photograph that started all the drama...

This whole "calling celebrities out" fiasco seems to be happening more often than ever now that we're on lockdown. Keep scrolling to see Hulk Hogan get mauled online by people that thought he was also disobeying the nation's rules...