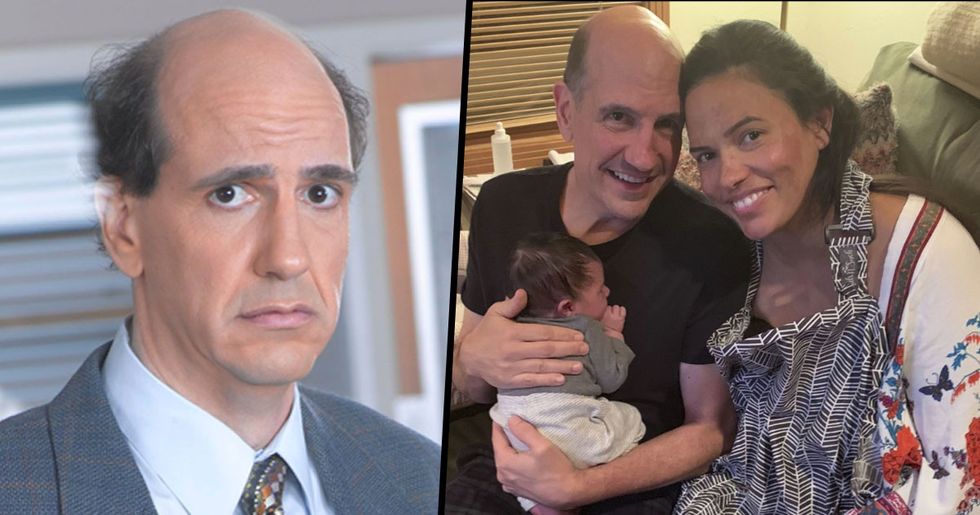 If you were born before the millennium, then you have almost certainly seen Scrubs. It was funny, surreal, and filled with loveable, flawed characters. Now the stars of Scrubs are having to rally together again to help out one of their own after a diagnosis of cancer.

But today is a sad one for fans of the show. Sam Lloyd who played Ted Buckland, Sacred Heart's lawyer in the hit show has sadly passed away aged just 56 years old.

Scrubs is a show that follows the lives of the staff at Sacred Heart Hospital. It has a wild humor, including daydreams and surreal imaginary sequences. This is then interspersed with acute insight into the lives of the authentic characters.

The show is centered around the lovable J.D.

Dr. John 'J.D.' Dorian is the narrator for the show and it is mostly through his eyes that we experience the show. Played by Zach Braff, it is his narration includes his internal thoughts and often involves a surreal dream sequence.

He couldn't have done it without his best friend Turk.

Donald Faison plays J.D.'s best friend and partner in crime, Turk. The two of them had a firm bro-mance before the term was even invented. He manages to keep J.D. in check when it's necessary, while also joining in with some of his mad plans.

Elliot and J.D. often struggle under the cruel guidance of Cox.

Dr. Cox is another unusual character from the show. He seems cruel in his hilarious put-downs, but he claims he is just trying to toughen up his interns. However, it would definitely be hard to stay up-beat with him as your mentor.

Then there was Dr. Kelso.

Dr. Kelso was the boss and he definitely made sure everyone knew that. While he was also tough with the interns, he didn't seem to really care about his patients. He is great as a viewer though. His cruel lines could have us in stitches.

And what great show doesn't have a central janitor character?

Neil Flynn plays this unlikely character who is constantly pranking J.D. He is a bit of an enigma, but a welcome addition to the more serious hospital life. He has gone on to find fame with a leading role in the show The Middle, which shares the same producers as Scrubs.

And then there was Ted.

Sam Lloyd played the inept, Sacred Heart Hospital lawyer. He had never won a case and would get very sweaty whenever he had to answer any serious questions. He also suffers the wrath of Kelso, who regularly treats him as something of a punch-bag.

Within the show, Ted's acapella band is his only release from an otherwise very depressed existence. However, Sam Lloyd was actually a member of this band in real life. They are called The Blanks. He is also the bassist for The Butties; a Beatles tribute band.

Even if you haven't seen Scrubs, you're sure to have seen Sam in another TV show. He was in Desperate Housewives, West Wing, Seinfeld, and Modern Family. He's also been on The Middle, with Scrubs co-star Neil Flynn.

You may also recognize Sam from these movies.

Does anyone remember Flubber? The movie stars Robin Williams as a crazy inventor, who accidentally invents flying rubber. And of course he was amongst the all-star cast of Galaxy Quest. This film starred Tim Allen, Sigourney Weaver and Alan Rickman. But then Sam faced a very different sort of challenge.

Cancer is indiscriminate in who it chooses as its next victim. It is a horrible illness that also affects the patients' loved ones. It effects everyone and so far there's still no real cure.

Sam Lloyd, who played Ted in Scrubs, was diagnosed with a brain tumor, which had metastasized from cancer in his lungs. It was also in his liver, spine and jaw.

It wa heart-wrenching timing to discover this.

Just weeks before the diagnosis, Sam's wife Vanessa gave birth to their first child together. They named him Weston. A theater accelerator program had also just accepted his project for a musical, which he had been working on for a decade. It was in the midst of their bliss as new parents that Sam started to feel ill.

It all happened very quickly.

Last year he kept travelling up to Vermont to help his sick mother move into assisted living. Mid-way through January, Sam started to get headaches. He had also lost 10lbs. He thought it was just from the stress and lack of sleep as a new father.

The next few stages were a bit of a blur.

By January 17th the headaches had started to get worse. He went to the doctors, who ordered a CT scan, thinking it was sinus-related. The doctors found a mass on his brain and he was rushed into surgery. Sadly the tumor is too intertwined and can't be removed. It has metastasized from his lungs and spread to other places too.

That's when the internet started doing its thing.

And he's not the only Scrubs colleague to put the word out.

Zach Braff took to social media to show his support for Sam. Everyone that speaks of him talks about how great he is. It seems like he was a very different character in real life to that of Ted, the lawyer.

Sarah Chalke is asking people to get involved too.

Sarah, who played Elliot, had nothing but kind words to say about Sam. Famous faces are in a fantastic position to use their influence for good. By using social media, people like Sarah are able to get the word out so that more people can help.

People have been very shocked by this terrible news.

And now there's been a tragic end to Sam's story.

He has passed away following his battle.

Fans are showing how much Sam meant to them.

What we watch on television stays with us long after a show finishes. For many people, they grew up with Scrubs and this news is devastating.

One fan even drew him a picture.

Sam is well known for his love of music, which went beyond his acapella group in Scrubs.

Many are mourning his loss.

And our thoughts are with his loved ones during this horrific time. And this hasn't been the only tragic loss this year ...