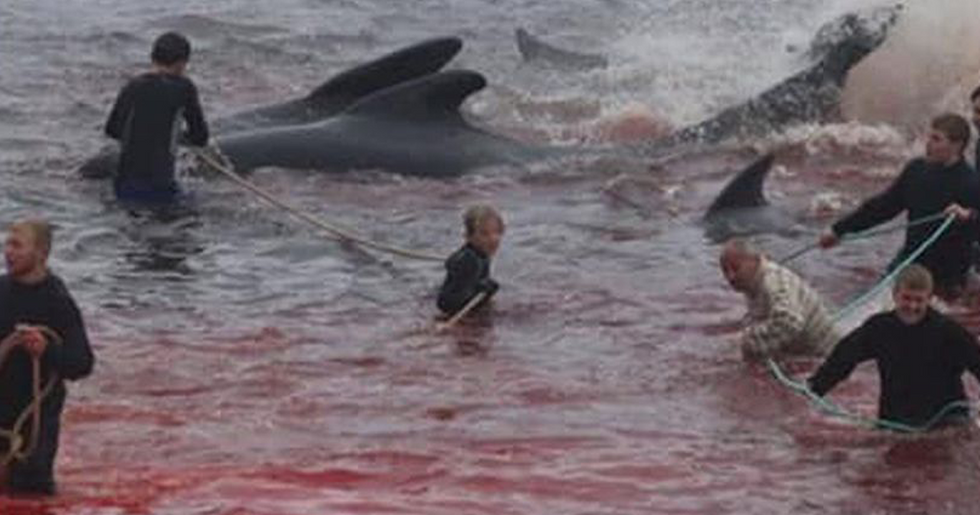 Pictures from a disgusting tradition in the Faroe Islands have recently surfaced during an event known as Grindadràp and I must warn you, ladies and gentlemen, this is not for the faint-hearted...

Whales and dolphins have long been prey to humans.

All around the world, many countries including Japan and Norway participate in annual events that involve the slaughter of wild aquatic animals.

And even though activists are trying to make it illegal...

Each year that goes by is another year that a new group of whales and dolphins killed for no reason.

Even though whale hunting has been banned in certain areas, such as in certain parts of Asia...

In areas of Europe, nothing has been done yet.

Dolphin drive hunts have never actually been made illegal in some places.

This particular hunt is based on driving dolphins and other small cetaceans into a small bay where they can be killed or captured for their meat and for sale to aquariums. Dolphin drive hunts exist in coastal communities around the world.

And one of the most widely documented drive hunts are the ones that occur in Japan.

The small village of Taiji, in Japan, still has it's annual dolphin hunting season, as twenty-six fishermen aim to fill their kill quota of 1,400 dolphins and 300 whales.

Attention was brought to the disgusting tradition back in 2010.

The Academy Award-winning documentary The Cove, which filmed the slaughter of so many dolphins that it turned the waters red with blood, shed some light on the devastating impact the ancient tradition has.

Thousands of innocent whales and dolphins are slaughtered every year.

And in the most brutal manner. For years, the tradition has seen fishermen mercilessly killing the dolphins with long, sharp spears and dragging them onto boats where they would eventually die a slow and painful death.

And if they're not killed...

They're torn out of their natural habitat and sold off into captivity.

But what is the whole point of this annual tradition?

There isn't one. Traditionally, the main purpose of the dolphin hunt was to provide dolphin meat to the Japanese people – but in more recent years, only a small minority of people in Japan actually eat the meat.

Another excuse is overfishing.

Japanese fishermen, supported by their government, are wrongly blaming the dolphins for the decline in fish in the oceans. From the fishermen’s perspective, the dolphins eat too much fish, and the fishermen are simply killing the competition. Again, there is absolutely no evidence to support these claims.

The non-profit organization, Dolphin Protect, have argued against their excuses.

The official reason Japan has given for the annual hunt is to use the dolphins for meat, but Dolphin Project says there are other reasons as well. “From the fishermen’s perspective, the dolphins eat too much fish, and the fishermen are simply killing the competition…It is about eradicating as many dolphins as possible in order to make the oceans’ fish available to themselves."

These annual traditions have no real benefit.

And is just another disgusting example of animal cruelty.

But the most recent hunt to take place is in the Faroe Islands.

In a tradition knows as Grindadràp, some horrifying pictures have emerged.

And they show hundreds of whales being slaughtered in the sea.

It was so bad that the sea even turned red due to all the blood seeping from the animals into the water.

Sea Shepherd, a charity organization, said that 252 pilot whales and thirty-five dolphins had been killed.

"252 long finned pilot whales and 35 Atlantic white sided dolphins were killed in Hvalba last night after the huge pod was found off Sandvik. This is the first organised Grindadràp hunt of 2020 with the meat from the hunt distributed first to the approximately 70 hunt participants from the boats and those killing on the beach - and then the remainder to villages on Suðuroy with all recipients then free to sell their share of the meat if they so wish."

And the tradition has obviously disgusted so many people.

Many couldn't believe what they were seeing...

This level of cruelty is incomprehensible.

This user tried to defend their actions...

But it was quickly drowned out by other distressed users.

They belong in the sea and that's where they should stay...

As if the entire area of water turning red isn't a massive indication that what they are doing is wrong...

Imagine if animals could fight back, then you wouldn't dare go near them...

Let alone try and slaughter hundreds of them at a time...

Here are the distressing photos:

As you can see, the sea has actually turned red. This is beyond heartbreaking.

And some others were posted too:

Let's hope we can bring an end to these traditions once and for all... Trophy hunting is also a massive problem in 2020, keep scrolling to read all about it...