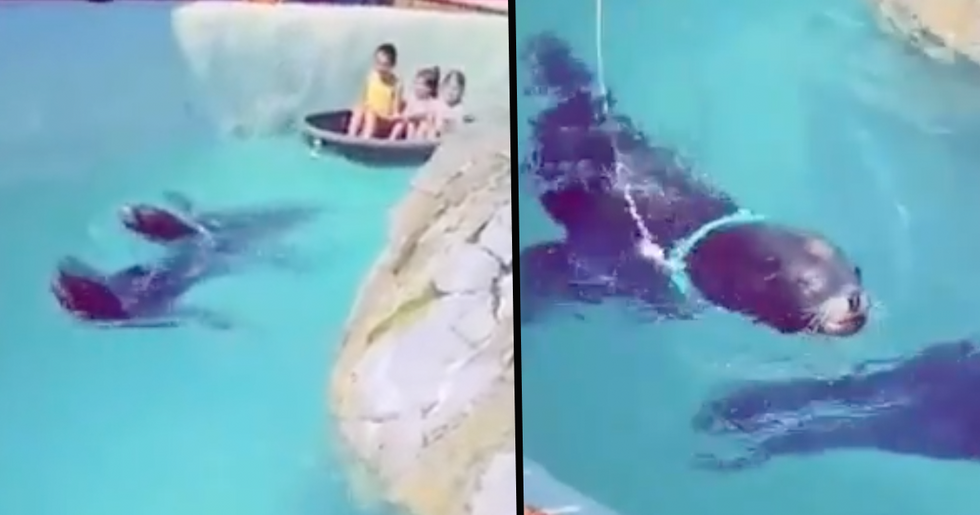 Viewers have been left appalled after watching a seal forced to drag children around in a boat, with a rope tied to its neck.

The footage is heartbreaking...

Yet another clip of shocking animal cruelty has emerged online.

This time, its seals that are the victims.

And has left the internet shocked and appalled by what they witnessed.

It's insane how this still goes on...

In so many parts of the world too.

Since the 1960s, the likes of whales, dolphins, and seals have been captured from the wild and forced into small tanks for our own amusement.

There's something undeniably quite distressing about seeing such intelligent and majestic creatures forced into chlorine tanks for the sole purpose to entertain and make money for humans.

However, in 2013, people's attitudes on the matter were to change forever.

And this week, shocking footage has emerged showcasing the cruelty that still goes on in many parts of the world.

The video was taken at the Mont Mosan animal park in Huy, in the Liège province of Belgium.

And shows 2 seals swimming in a water attraction at the park.

Both seals appear to be towing a boat containing 3 children.

1 of the seals can be seen with a blue ring attached to its neck as it swims around a corner towing the boat.

It's a harrowing watch.

"I find it horrible what we are still doing to animals in 2020. All to entertain people and for money!" said Aaron Copette, who filmed the footage before forwarding it onto animal rights organization, C'est assez (translating to That's Enough).

"Even if the owner of the park says he does not abuse or lock up the animals, or force them to do shows, it is still a form of abuse."

The group's founder Christine Grandjean said: "You can't treat animals like that! We don't want the [park owner] to be threatened and have amended our Facebook post to ask people to be more moderate when contacting him. "We don't think he is intentionally harming the animals. Even though we have received reports that the park is insalubrious. We understand that the seals do it voluntarily, slipping into the rope lasso and pulling the boat around. But they wouldn't do it if it weren't for the fish they are given as a reward."

"These are animals that belong in the wild. They should not be used as entertainment by people."

Since being shared online on 9th August...

The footage, which has since gone viral, has understandably provoked outrage among viewers.

@RobRobbEdwards Too many people use animals as slaves because they don't have to pay them and they are helpless.Ani… https://t.co/ocg5zK3UOc
— Deborah Keenan (@Deborah Keenan)1597369379.0

You can watch the shocking footage here.

For more on the devastating treatment of our marine animals, keep scrolling.