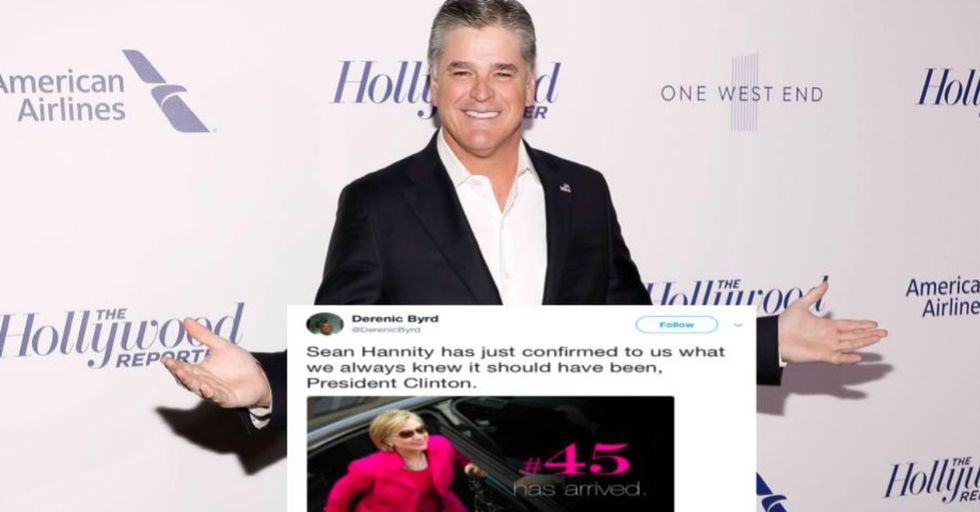 Fox News host Sean Hannity is used to going on verbal rampages. He has, at varied times, raged against former President Barack Obama, celebrities, the left wing media, Republicans, Democrats, etc. The problem is, while his rants are high in volume and obscenity, very few of them have a firm basis in reality.

Hannity was at it again Monday evening when he unleashed an unhinged rant against Hillary Clinton in the wake of the Mueller indictments.

As a quick reminder, Paul Manafort, the former Trump campaign manager who had a lengthy history of working politically with the Ukraine and Russia, was indicted along with his business partner Rick Gates, as well as George Papadopoulos, a former high-ranking Trump campaign aide the President falsely referred to as a "volunteer," on charges of money laundering, conspiracy, and making false statements to federal agents.

Conveniently ignoring the fact that these charges had nothing at all to do with Clinton, Hannity laid into the former Democratic hopeful as well as her one-time boss President Obama for their supposed funding of the Trump dossier and their collusion with Russia on the so-called Uranium One Scandal.

There are multiple levels of complex lies to unravel here. Let's start with the Trump dossier, or, as Hannity referred to it the "Fusion GPS Hillary DNC President-Obama Funded Dossier." It's important to note that while Clinton's campaign did fund the dossier, it was first funded by the conservative website The Washington Free Beacon. Also, let's not forget a couple of facts for those trying to tie Clinton to Russia.

On the subject of Uranium One, the new scandal being peddled to distract from the Mueller indictments, there is literally no truth to it — just a lot of smoke and mirrors.

Basically, proponents of the Uranium One "scandal" claim that Hillary Clinton sold 20 percent of America's uranium to Russia, presumably to use for their nuclear program. It's all one big, fat lie — excuse our French. According to The Washington Post, "There is no evidence Clinton even was informed about this deal ... Moreover, no uranium produced at U.S. mines may be exported, except for some uranium yellowcake which is extracted and processed in Canada before being returned to the United States for use in nuclear power plants."

We could further explain how the Uranium One deal is fake, but Joy-Ann Reid of MSNBC did such an excellent job, we'll let her handle it.

So, to review, Uranium One scandal — not a thing. Obama and Clinton colluding with Russia? Also not a thing. Moving on.

At the 5-minute mark, Hannity was so deep in his peddling of fake news that he made a mistake revealing how he truly felt.

Sean Hannity has just confirmed to us what we always knew it should have been, President Clinton. https://t.co/NxEVsNkGtH
— Derenic Byrd (@Derenic Byrd)1509416125.0

He referred to Hillary Clinton "President Clinton." That's right, as Hannity called for deeper investigations into Clinton's supposed crimes, he also addressed her as the president, proving what we've known all along. Even Sean Hannity thinks Hillary Clinton should have been 45.