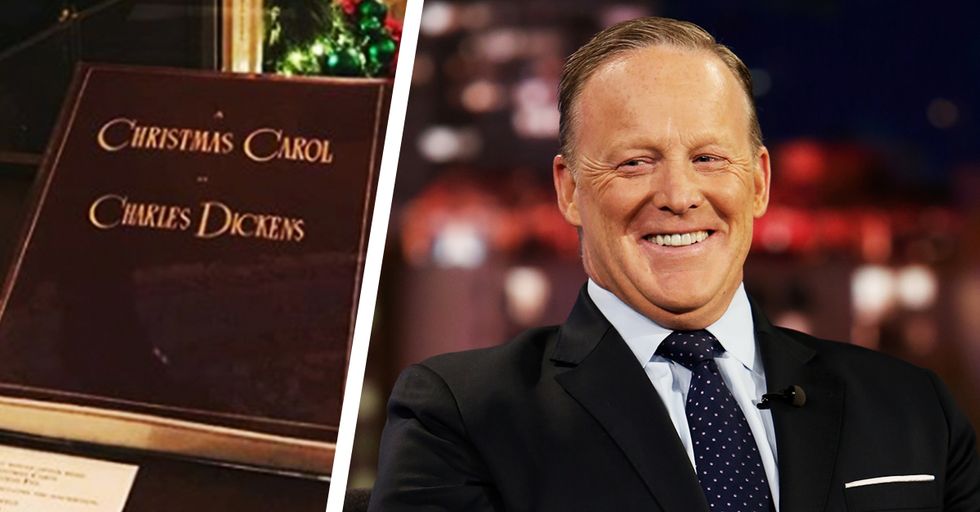 Back when Sean Spicer was the White House Press Secretary, he would get up to all kinds of hijinks that would make us both laugh and fear for the country. Like claiming Trump's infamous "Covfefe" tweet was totally intentional or insisting that Dippin' Dots is not the ice cream of the future. Now that he's moved on from that job, we almost kind of miss the guy. Almost. (Although his eventual replacement, Sarah Huckabee Sanders, has provided her own fair share of laughable fails.)

So it was wonderful to be flipping through Instagram and see a post from Sean Spicer that was so bizarre that we could cover it on 22 Words. We're back in the ol' Spicy Saddle, folks!

Pretty much everyone is familiar with A Christmas Carol. In case you somehow missed it, though, here's a quick rundown (illustrated by the quintessential Christmas Carol film, The Muppet Christmas Carol). (Spoilers for a 170-year-old book and 25-year-old movie incoming!)

It tells the story of an old man named Ebenezer Scrooge, who is greedy and stingy and basically a curmudgeon. He's famous for saying "Bah! Humbug!", a phrase which roughly translates to, "I am grumpy and refuse to acknowledge that the holidays are a magical time of year."

Scrooge is visited by a bunch of ghosts on Christmas Eve.

The ghosts take him to visit the past, the present, and future Christmases of his life. Scrooge sees how his irascible behavior has affected everyone from his first love to a sickly child named Tiny Tim. In the Muppet movie, he sings a bunch of fun songs (and one long, boring one). That's not in the book, though. We can't be clear enough about this. There are no songs in the book.

Throughout the course of the story, Scrooge learns that if he doesn't change his ways, he'll eventually die alone and no one will mourn him.

Instead, they'll steal his possessions and neglect his grave. Also, Tiny Tim will die!

At the end of the story, Scrooge changes his ways and buys a giant turkey to share with everyone.

And Tiny Tim, who did not die, celebrates alongside the formerly Scrooge-y Scrooge. It's a powerful lesson that everyone could benefit from taking to heart. Specifically, people who work in the White House (or who have worked there in the past).

But Sean Spicer seems to have missed the whole point of A Christmas Carol. He posted the following photo on Instagram a couple days ago:

It's a picture showing Franklin Roosevelt's copy of A Christmas Carol on display in the White House. In the caption, as you'll see, Spicer referred to it as "FDR's book of Christmas carols." And of course, the Internet reacted. 'Cause that's what the Internet is here for.

People couldn't help but poke fun at Spicer for his complete lack of classic lit knowledge.

First of all, the book is called A Christmas Carol. It'd just be one carol. If it were a carol. Which it isn't. Does Spicer think FDR had a book containing one book-long song? "We Wish You a Merry Christmas" does have a lot of verses, but not that many. That'd be ridiculous! Almost as ridiculous as a 46-year-old man who went to college not knowing what A Christmas Carol is.

Others made guesses as to what else the title "A Christmas Carol" could refer to.

@ashleyfeinberg @prozdkp It's actually just supposed to be a bunch of women named Carol in bad Christmas sweaters
— Vincent (@Vincent)1513280666.0

We would 100 percent read that book. But we would also read the actual book. And we did. But Sean Spicer did not.

Others were questioning what Spicer must assume about other Christmas classics.

Apparently, we can just use words in any way now. Even when it comes to Sean Spicer's name!

If you think about it, a Sean Spicer could also be a person who uses those spices to prepare a Sean. We don't know what "Sean" would be in food form, but the spices make us think it could maybe be delicious. Maybe?

Real talk, though. This is probably the least surprising revelation about Sean Spicer to date.

Of course he's not familiar with A Christmas Carol. If he was, he might have stopped himself from working for Scrooge.