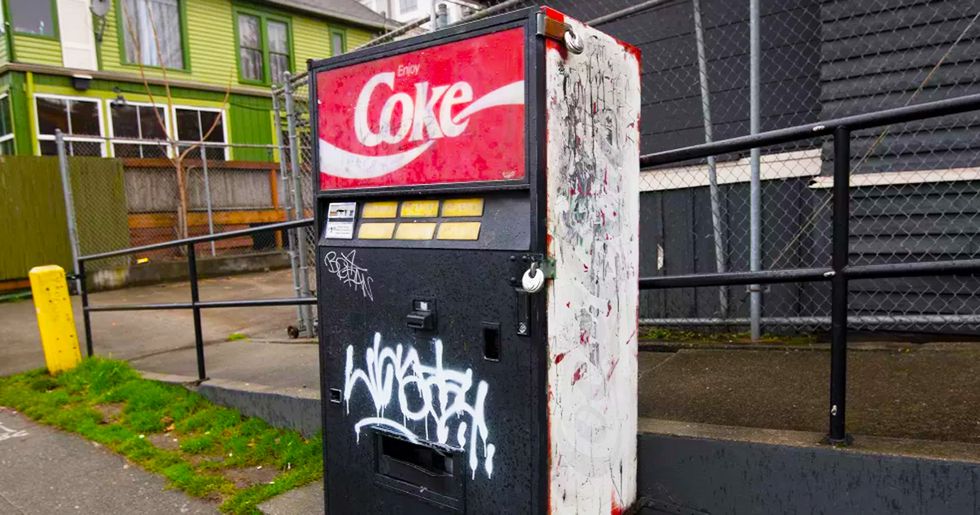 If you let yourself, you could easily spend the entire day thinking about all the incredible mysteries in the world. For example — who was really Jack the Ripper? Could there be a lost city of Atlantis? Is Bigfoot real or fake? Why didn't Disney hire one director for all three of the new Star Wars trilogy so Episodes Eight and Nine didn't feel so weirdly disjointed?

Of course, all of those mysteries are ephemeral; intangible. We can't go look at Bigfoot, let alone get a soda from him. That's what makes the mysterious soda machine of Seattle, Washington so fascinating. A rusty, vintage vending machine sat chained to a street ramp outside a local locksmithing business, and no one knows how it got there, who was stocking it, or where the money was going. It could be Bigfoot, for all we know. (He has been spotted in the forests of Washington, after all.)

Here's the complete story of the mysterious soda machine, or at least as much as we know about it today. See if anything jumps out at you that could lead to the discovery of the identity of whatever elusive soda magnate is restocking the thing.

For those of us who are now so used to ordering our sodas on Amazon, soda machines used to offer a respite for the thirsty walking the streets. Drop in a few coins, get a drink, go on your day. Nothing more to it than that.

But this particular machine has a following.

Sitting on John Street and 10th Avenue East in Seattle's Capitol Hill neighborhood, so that it can't be stolen (I guess by, like, a body builder? Who else could lift it?), this beat-up old Coke machine has been a fascination of both Seattle residents and conspiracy theorists.

And Seattle residents are enamored with it.

This seemingly normal soda machine has attracted a following, with devotees stopping by daily to drop in their quarters. So what's so different about this machine?

It's the mystery surrounding it.

No one knows who owns the machine, who put it in, or why. And while no one knows who runs most soda machines, this one, in particular, indicates that there's more to discover.

One of the buttons on the machine itself literally reads "mystery" in this weird, cool faded yellow. It honest to god looks like a trap set by the Riddler, and you can understand why Settle denizens might be intrigued.

And the best part are the kinds of sodas the machine spits out.

That mystery button has produced some sodas that are absolutely bananas (and I'm not talking about the quickly-recalled-because-it-was-so-disgusting Sprite Banana.)

There are reports of the machine spitting out soda that had been discontinued long ago.

According to a video on Today I Found Out, people have said the mystery soda machine has produced sodas like Hubba Bubba, a soda flavored like bubble gum from the '80s.

And maybe even Crystal Pepsi.

A clear soda released by Pepsi only between 1992 and 1994, Crystal Pepsi is one of the company's biggest flops. And yet, a can supposedly made its way into the Seattle mystery machine.

So where did the machine come from?

Here's the thing — no one knows. The machine sits outside a locksmithing shop, and in a USA Today video, its owner Eric Hayes says he remembers it being in the same spot when he bought the building in 1986.

And while Hayes is a likely candidate to own the machine...

... he says in that same video he could break into the thing and steal all the Cokes (or whatever other kind of nonsense soda is in there) he could drink. Business owners do not like to remind potential thieves how easy it would be to pop in and steal their own products. I think we can safely rule him out.

It makes sense it'd be outside a locksmith though.

It's the kid of puzzle I can't help thinking about; the kind of puzzle I'd happily pay someone to unlock for me.

No less than the Seattle Times felt the same.

And in her story, reporter Jessica Lee found that the City of Seattle had "no permits on file for the machine."

One thing that can be said for the mystery machine — it wasn't out to steal your money. If you dropped in the right amount of money, you'd get a can of soda pop. That means someone was opening it up and refilling it with weird old sodas.

Is it some merry prankster?

Did someone just end up with an old vending machine in the '80s, start filling it with bizarre sodas, just to sit back and watch people wonder where the hell these crazy drinks were coming from?

An eccentric billionaire who longs for a simpler time?

Granted, I don't have nostalgia for the days when a man could get a can of pop for 75 cents as he strolled down the street, but maybe that's why I'm not a billionaire? You gotta think different to make a million dollars, man.

Is it a limited focus group?

Is Coke or Pepsi trying to find out the general interest in bringing back Pepsi AM or OK Soda or Coca-Cola Banana?* Maybe the people in Capitol Hill are somehow demographically representative of their preferred client base? *There is no such thing as Coca-Cola Banana, although it does sound good and is a good idea.

This proves that even unexplainable mystery sodas perhaps paid for by eccentric billionaires are not immune to inflation.

But the biggest change was in the buttons.

Whoever runs the mystery machine knew that if you're gonna be a mystery, be a mystery. At first, there was just a lone "mystery" button and then specific soda choices like Coke or Mountain Dew. But then, one day, every button turned into a "mystery" button.

It's great for indecisive soda-drinkers.

When I'm getting something out of a vending machine, I often feel so overwhelmed by choice that I stare at the glass until I pass out from hunger. It'd be nice to just press a button and get whatever I get.

People would go back to the machine day after day and get a different soda each time. It's not like whoever owns the machine just came into a huge shipment of Squirt and needed a place to unload it — they're a true soda curator.

But then, one day, it was gone.

Sometime around June of 2018, the mystery machine just up and vanished. One day it was here, the next day it was gone.

Tourists had traveled to see the machine.

We love the unexplainable, so you can understand why people would be drawn in, and the disappointment they must have felt to arrive in the area and find nothing there but an average-looking locksmith shop.

It's too bad it wasn't an underwater vending machine.

That's how Loch Ness has remained a tourist attraction all these years — people just assume the Loch Ness Monster is still under the water, even though it bounced way back in 1995.

But the machine left a message.

A print-out of the words "Went for a walk" with a signature from "Machine" were taped to the banister when the machine disappeared.

Yes, the Seattle mystery machine even has a social media presence. A few memes and Photoshops have popped up on the page, meaning that while it's gone, it is not going to let itself be forgotten.

So where did the machine go?

Why would someone support a kooky vending machine for two and a half decades, and then suddenly get fed up, throw it on a truck, and peace out.

Maybe as media coverage picked up...

There have been numerous media outlets talking up the mystery machine. The thing was not only a tourist destination, but it was well on its way to becoming a meme.

If this vending machine is so entrenched in mystery that literally the only way we can interact with it is to push a button marked "mystery," you have to imagine the mystery was pretty important to the DNA of this machine/trend/cultural attraction.

Maybe the mystery had to be preserved at all costs.

Maybe the owners of the mystery machine were worried we'd find out their identity, and had to pull the machine off-grid for a while while things cooled off?

Because what is that machine without the mystery?

Without the intrigue of the whos and whys, this vending machine is no different than any other vending machine in a school or arcade. So did people like me — bloggers writing up the silly machine to delight their readers with an off-kilter story about a weird deal happening in Seattle — cause the vending machine's disappearance? If so, I'm not sorry. Soda is bad for us. We should all drink more water.