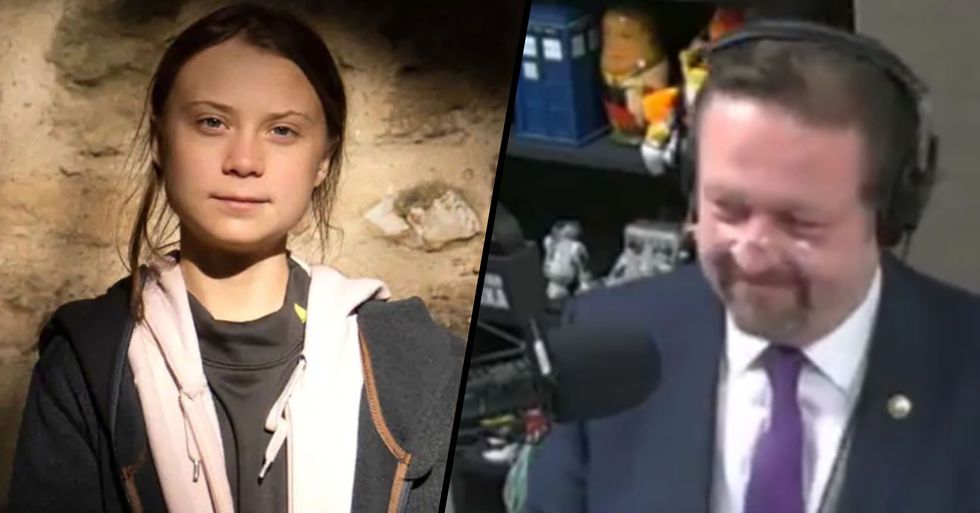 Greta Thunberg has become the face of climate change over the last year.

The seventeen-year-old Swedish activist has changed the entire world's outlook on the current climate crisis, and she is now a global celebrity.

However, with every famous person comes haters.

Sebastian Gorka is the most recent to take a swipe at the teenager by making a disgusting joke about her body.

Greta would regularly sit on her own outside Swedish parliament, first staging a "School Strike for Climate" in August of 2018. In the weeks leading up to the country’s general election, Thunberg sat on the steps outside of the parliament building in Stockholm, holding up the now-iconic sign that read “Skolstrejk För Klimatet" — translating to “school strike for climate."

And, in the last couple of months, Australia has been concrete evidence of this theory.

Starting in November this year, the country has been relentlessly ravaged by ferocious bushfires.

Greta has spoken out about the current crisis...

Not even catastrophes like these seem to bring any political action. How is this possible? Because we still fail to… https://t.co/y32BultloJ
— Greta Thunberg (@Greta Thunberg)1577007441.0

Slamming the Australian politicians, she wrote, "Not even catastrophes like these seem to bring any political action. How is this possible?" posting alongside an Australian news report of the devastating fires to her 3.7 million Twitter followers.

She has blamed climate change for the deadly weather conditions.

"Because we still fail to make the connection between the climate crisis and increased extreme weather events and nature disasters like the #AustraliaFires That's what has to change. Now."

She is simply trying to make us realize what is going on...

And the bushfires in Australia are a prime example of why we need to make these drastic changes.

But despite Greta's tireless efforts...

Some people refuse to listen and many resort to trolling the teenager out of spite and jealousy.

And who is the latest troll?

It is, of course, Donald Trump's former aide Sebastian Gorka.

Since he retired from serving the President in 2017...

Sebastian now broadcasts and hosts a Salem Radio show and worked for Fox News until 2019.

A segment from a recent radio show was posted to Twitter yesterday...

Sebastian was interviewing crime writer Andrew Klavan via telephone, and Andrew mentioned Greta and struggled to pronounce her surname.

Sebastian clearly felt this was a great moment to crack a joke...

Andrew said, "Whatever her name... what is her name? Greta Thunberg?" to which Sebastian replied with, "Thunder thighs, Greta Thunberg."

Of course, the joke wasn't funny. At all.

While Sebastian chuckled at his own jokes, followers on Twitter were not impressed.

Not only has he been branded as a Nazi...

He has also been branded as a pervert.

It is never acceptable to make a joke in regards to a person's body...

President Trump and his inner circle clearly have a problem with the teenager...

Last month, he slammed Time for naming her Person of the Year, claiming she has an “anger management problem." Then his campaign shared an edited image with Trump replacing her on the magazine’s cover.

But it is totally unprofessional.

Sebastian is yet to comment on the backlash, so let's hope he does the right thing and issue a public apology to Greta very soon.