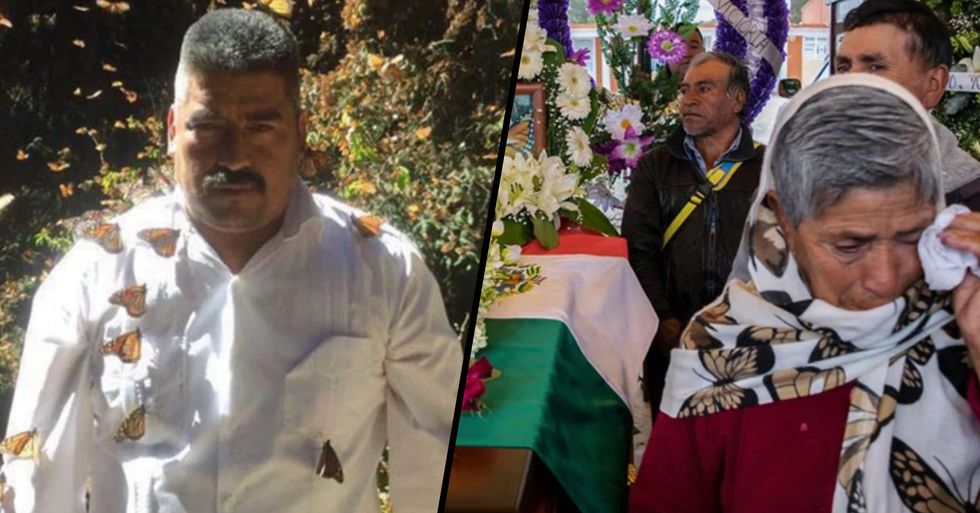 A second Mexican Butterfly Activist has been found dead in the Michoacán state, just days after the funeral of the first activist.

The deaths are believed to be related to gang violence in Mexico which is at an all-time high.

Keep scrolling to get more details about this complex story...

2 people have now died in relation to the Mexican Butterfly Activism.

The 2 victims have been named as Homero Gómez and Raúl Hernández, and they were both found within days of each other.

But what exactly is happening with the Mexican Butterfly?

The monarch butterfly flies to Mexico every year to hibernate - which is the longest migration of any insect in the world.

These creatures are not only beautiful...

But they are also very intelligent. Researchers found that the butterflies use an "internal solar compass" to guide them during their flight from Canada and the US to the same area on the border between Michoacán and Mexico state every year.

They have become somewhat of a tourist attraction...

Once they reach the mountain hillsides of the oyamel fir forests in that area, they cluster together to stay warm. Tens of thousands of butterflies can be seen on a single tree, creating an incredibly colorful spectacle that many flock to witness.

But environmentalists have warned about the butterflies' safety...

Illegal logging poses a major risk to these forests and, ultimately, to the butterflies who spend their winters here.

Environmental activists have stepped in...

Many people in Mexico campaign tirelessly for the conservation of the monarch butterfly and the pine and fir forests where they hibernate and people have been coming together this year in a bid to protect these beautiful creatures.

The body of one of the butterfly activists was found dead in a well on the 29th of January.

His name was Homero Gómez...

And he managed a monarch butterfly sanctuary in the Michoacán state, but it has emerged that he had received threats prior to his death.

The threats told Gómez to stop campaigning against illegal logging...

But with him being a passionate campaigner, he took no notice and continued with his work anyway.

Gómez died as a result of drowning...

But the post-mortem found a head injury, indicating that Gómez was more than likely attacked and murdered.

This was a tragic loss...

But the violence was not yet over.

Raúl Hernández went missing on the 27th of January... a few days before Gómez was found.

Hernández was also a keen butterfly activist, and he worked as a tour guide at a butterfly sanctuary in the same Mexican state.

His body was sadly found on the 2nd of February at the top of a hill in the butterfly sanctuary...

Which was 2 days after Gómez's funeral.

It bore signs of beatings and he had a severe head injury, and this has led conservationists to fear that his death is related to that of Gómez.

An investigation has been launched into the 2 tragic deaths...

And the passing of these men follows recent statistics of Mexico's murder and violence rates.

Mexico's murder rate has soared over the years...

Official figures suggest that 2019 had the highest rate ever recorded, with 34,582 recorded killings.

Many of these killings are believed to be carried out by gangs and drug cartels...

These range from drug and human trafficking to extortion, logging, and mining.

So make sure to stay tuned for further updates. Our thoughts and condolences go out to the family and friends of Homero Gómez and Raúl Hernández.