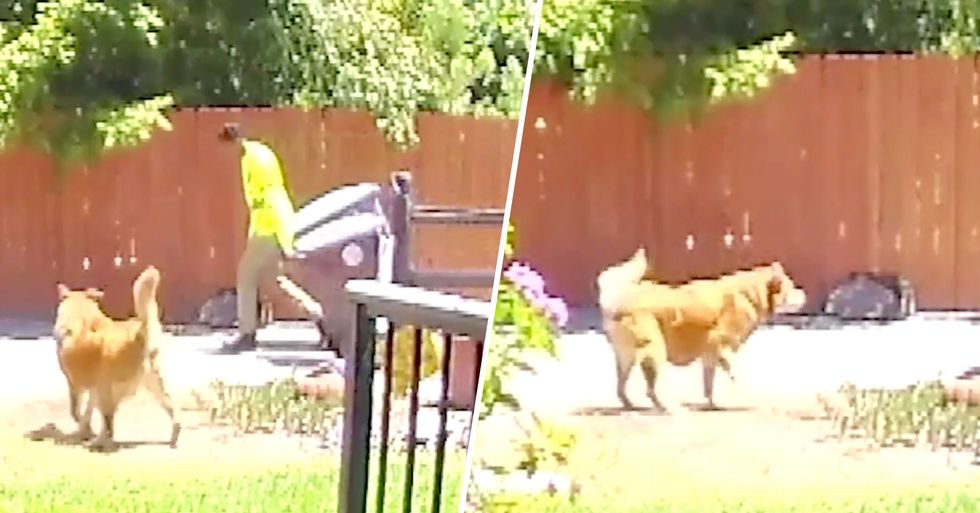 A "hero" dog has won over the hearts of the internet this week after footage emerged of him leading a sanitation worker to his elderly owner who had fallen...

A hero doggo is in the spotlight this week.

Dogs are known for their sharp instincts and loyalty, and this adorable pooch put his skills to the test after his owner fell.

The security footage of the incident instantly went viral.

And stole the hearts of hundreds of viewers.

Would we expect anything less from a loyal doggo?

Dogs are great for many reasons.

They are incredibly intelligent.

So much so, a puppy can be trained to work as a service dog, which is a dog who works to serve and assist the disadvantaged or disabled – such as blind people, deaf people, or those who suffer from seizures.

Many of us like to think that if anything happened to us, our dogs would try and do something to help, whether they are trained service animals or not.

And it seems that's exactly what happened with Gwendola Johnson and her doggo.

Gwendola, who's eighty-eight and her dog, Sandy, who's eleven, have a tight-knit bond.

Gwendola adopted Sandy as a stray.

And they've been inseparable ever since.

On July 10, Gwendola was walking out her front door when she took a tumble.

Causing her to trip and fall to the ground.

She was unable to move or get up to call someone for help.

But Sandy was right by her side.

While Gwendola lay there, she noticed a man in a neon green shirt walking up her driveway.

The man was Kirk White, a sanitation worker with Glendale Integrated Waste Management.

And it seems he'd come to pull her trash cans at just the right time.

The events that followed were caught on security footage from a Ring doorbell.

During the clip, you can see Sandy trying desperately to get Kirk’s attention. "The way he was barking, like, 'I have something to show you — come follow me this way, there's something I want you to see,' " Kirk explained to NBC Los Angeles.

The hero doggo then leads him right to his mom.

Kirk then helped her up and made sure that she was not injured.

When Gwendola’s family saw the footage, they say they were brought to tears.

"Sandy was a good boy, and Kurt came up the driveway just about the right time," Gwendola said. Cheryl Malvar, Gwendola's granddaughter, told  KTLA 5 that their family "all cried" when they watched the video. "Sandy did a good job," Cheryl said.

And it seems the internet was in tears too.

Sandy and Kirk both seemed to have made quite an impression on people.