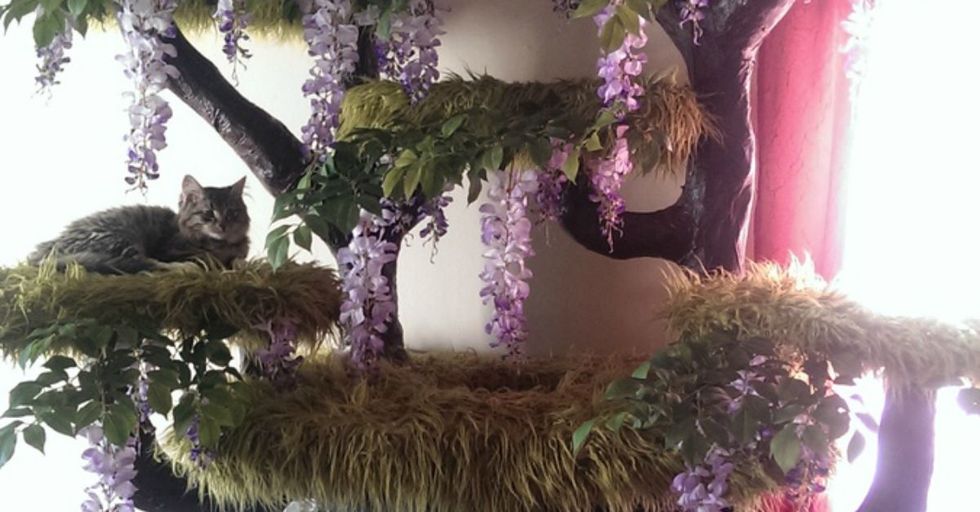 See How This Kitty Got A Truly AWESOME Homemade Play Space

Do you see this contented cat? The reason might be that his owner got creative with some old planks, paint, and carpet to create an amazing DIY play space.

He had a cat who needed some excitement, and he also had a wife with a rather big idea for how to go about that.

It all started with some dirty planks of wood that had been sitting in his parent's garage.

The first step was to clean it up and use braces to make it stand up in a semi-circle.

Then he cut out the steps, because how else would they create the levels?

And then the steps had to be attached, of course.

It's starting to take shape...

A top was installed to close things up a bit...

...and then holes were cut out to give it more space.

Then some more stands were added to the outside.

With the basic structure created, it was time to add in PVC pipes for "branches" to really help it take shape.

His wife took over for a bit and used paint, glue, and tin foil on the outside for some additional texture.

But she wasn't done with that yet...

The trunk needed to be painted, of course.

How about some shaggy green carpet to create a "mossy" effect?

And then add in some beautiful flowers.

What's different about this picture? Maybe the cat on the left...

He obviously gives his satisfied seal of approval.