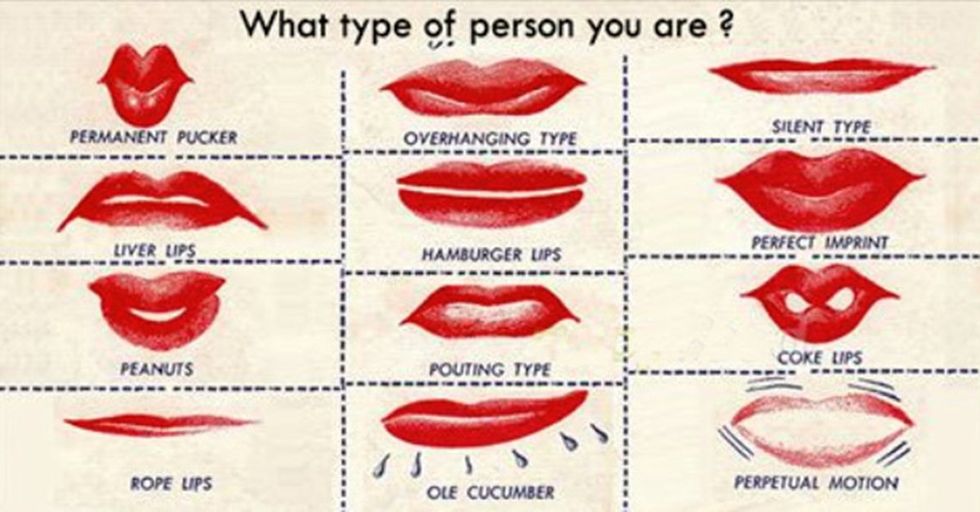 They say you can learn a lot about a person by looking at their face.

It's not specified "what" you can learn, but expressions can speak to what a person is thinking or feeling for sure.

But even putting expressions aside, the actual structure and features on a person's face can reveal a lot as well.

There are art forms and belief systems based on just that dating back thousands of years.

It's said, in keeping with that belief, that the eyes are "the window to the soul."

That may be true for some, but you can certainly look elsewhere to learn about a person.

The shape of one's lips are thought to reveal just as much.

We generally overlook them, though, as we find that staring at a person's eyes is more polite and less weird.

You might not think that your lips really say much about who you are as a person, but experts in face reading think otherwise.

Jean Haner, one such expert and the author of The Wisdom of Your Face, says, "You were born with the features you have for a reason — every feature is linked to a part of your personality and they all work together to represent who you are." The biggest indicators on your face (even more so than your eyes) are your lips, the shape of which lead people to draw conclusions about the type of person you are. See what your lips say about your personality!
Buy Now

Small and round lips such as these give the sense of joyfulness and playfulness. They also suggest a higher energy level than people with thinner lips.

These lips are very forward and so is the person behind them. They exhibit confidence and assertiveness, but, strangely enough, not a pouty disposition.

People with broad lips tend to be seen as having balanced, stable characteristics. Other positive traits these imply includes a nurturing disposition and professional success.

As you might imagine, people exhibiting these types of lips are seen as romantic, glamorous, and value creativity over practicality.

These lips signify a person who is practical and caring, but not necessarily assertive. They're often more shy than those with other lip types. Haven't found the type of lip you're looking for? Don't worry! There are plenty more, as you'll see.

This rare type of lips are often found on people who tend to be more withdrawn and quiet. However, they're usually indicative of a person who's very thoughtful and reflective as well.

These lips aren't necessarily like the doll lips or the thin ones mentioned above but are just proportionately smaller on the face than other types. People with this feature are often self-driven and independent...until the right person comes along.

As the name might suggest, people with these lips often work to become the center of attention. They're often seen as the "life of the party."

This thicker type of lip is representative of a person who is responsible, but tends to let their emotions dictate their courses of action, which can always be a tricky situation!

Now that you're armed with this knowledge, put it to the test.

Ignore the characteristics you'd associate with these piercings and focus on what these lips mean! Good luck!