High School Lets Seniors Dress up for Their ID Photos, and the Results Are Hilarious | 22 Words 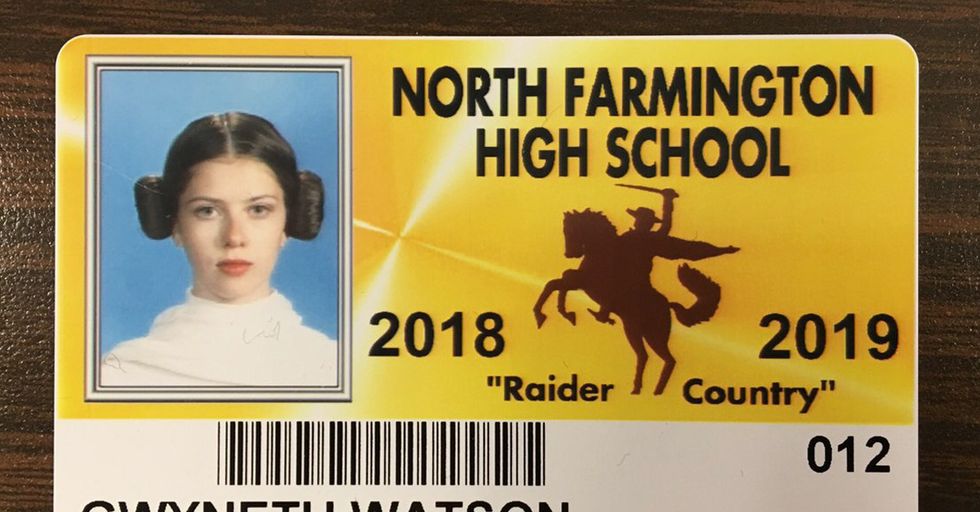 High School Lets Seniors Dress up for Their ID Photos, and the Results Are Hilarious

Do you remember being a senior in high school? I suppose for some of you, it may not have been that long ago. By the time senior year starts, most kids either have some idea of where they're going to college or what their plan for next year is. By this time, you have done all you could to pad your resumé and impress the schools to which you applied, so your senior year is time to kick back, enjoy the last year of school, and have a little fun.

And that is exactly what the seniors at North Farmington High School did. The school has a tradition of letting their seniors dress up as their favorite pop culture characters for their ID photos, and this year was no different. Of course, these brilliant seniors' photos inspired a hashtag and went totally viral. It's 2018. I would expect nothing else. But the thing is that these photos are really good. Like, insanely wonderful.

School photos are a big deal.

Whether they are for your yearbook or your ID, these are the photos that everyone you know are going to see. That's a big deal. Luckily for the seniors at North Farmington High School, they can be whoever they want to be in their ID photos.

The Princess Diaries is a forever classic and no one can convince me otherwise. Every single actor shines in that perfect movie, and I'm glad Sydney chose to honor that in her ID photo.

It doesn't get much more badass than this. Especially in this day and age, another intelligent, female SCOTUS judge of Ruth Bader Ginsburg's status is something to pine for.

I love lamp! And I love this interpretation of Brick, Steve Carrell's character from Anchorman. The dude really commits to the part.

Obviously, The Magic School Bus is a total classic and Ms. Frizzle is an icon. But also, this girl committed to the whole bus thing, and it's absolutely marvelous.

I wonder if she dressed like Ronda Rousey because she knew she already kind of looked like her. The resemblance is uncanny!

This is so precious. Victoria is my new hero.

It touches my heart that kids in 2018 are still watching Friends or are at least familiar enough with the show to get this reference.

Poor Meg Griffin. She is definitely the black sheep of the Griffin family, but mainly because she is so normal. Madelyn captures her essence perfectly.

Lily is out here killing it as Bob Ross. She's got an artist's palette and the angle of brush and everything!

Um, can we just take a look a that little, stuffed chihuahua's face for a minute because it is too good? This was very well done.

Especially since the new adaptation of Stephen King's It came out in theaters, there is not a soul on this planet that doesn't automatically recognize that little kid in a yellow raincoat holding a red balloon. It's enough to send chills down your spine!

Enchanted is a wonderful movie and I don't think it gets the credit it deserves. Shout out to Danielle for honoring the venerable Amy Adams in her photo.

Ken Jeong's performance in the Hangover movies is ludicrous on so many levels, and I love that this kid went full turtleneck on this look.

Maryan deserves a standing ovation for this interpretation of this classic, iconic photo of The Rock when he was young. Well done.

The accuracy in this costume of Dipper Pines from Gravity Falls is amazing. Impeccable work, on the book especially.

Johnny Depp's pirate character is an old classic at this point, but that doesn't make him any less impressive. Julianne did a top-notch job.

Wayne's World characters are some of the easiest, most classic Halloween costumes ever, but that's because they're so great every time. This team effort gets an A+ from me.

How did Madeline get her hands on that perfect Veruca Salt dress and a golden egg?! This one is beyond amazing.

A classic. And he got the hair down pat. Bears. Beets. Battlestar Galactica.

If you're not familiar with this YouTube star, just know that she did a great job. And her real name is Miranda, which is just the cherry on top!

Not going to lie, I had to look up what Kenan's character was named in Goodburger because I just thought they went by Kenan and Kel. But no. Their characters were Dexter and Ed.

Of course, someone had to dress up as Dumbledore. And Anthony brought a certain...giant white beard to the part that the other kids just didn't have.

Wow, this kid looks just like Tom Holland. That is crazy.

Mean Girls is endlessly quotable and a total classic for anyone who knows what high school is like. This guy nails Damian's look in that iconic scene.

Let me just reiterate again how much I love that even kids who are still in high school today are fans of Full House and Friends and other '90s shows we all consider classics.

There have been so many Colonel Sanders lately, and while Reba McEntire might be my favorite, this one is good too.

This person fit two whole characters into her photo of just one person! That is quite impressive.

All hail the mighty queen, Carrie Fisher. She is a legend deserving of all the senior photos in all the land.

OK, this is hilarious because I was like, "Wait, isn't this her left foot?" and then she explained in a subsequent tweet, "the point is I’m standing on my right foot and the left foot is in the pic." Can't argue with that logic. Share this with someone to make them smile!