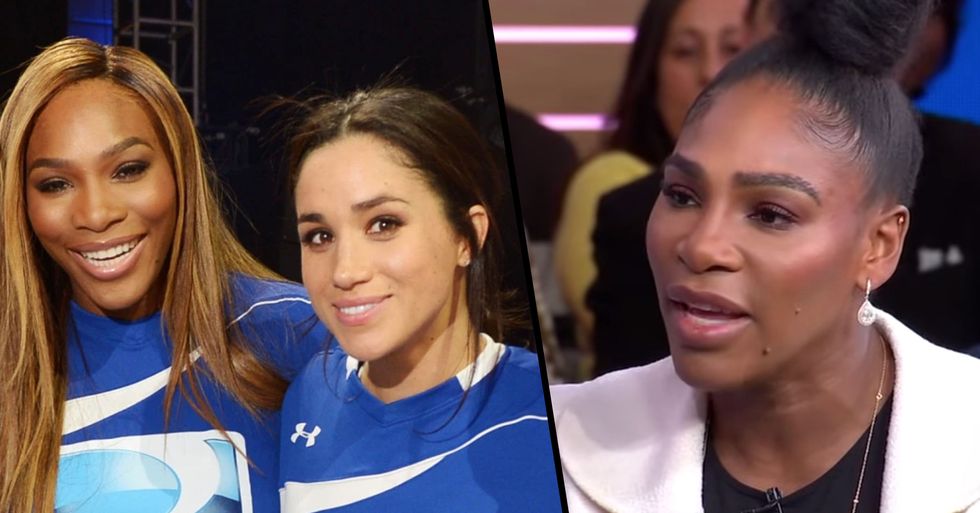 There's always been something about the royal family that we simply can't get enough of. Whether it's their constant grace and glamor or simply the fact that we don't have our own clan of Royals, there's something about them that has always had us hooked.

And when one of our own moved into Buckingham Palace, we've felt more connected to the royals than ever before. Until recently, that is.

After an unprecedented split from the royal family earlier this month, the press has been hounding Meghan and friends to find out what's going on behind the scenes.

But Meg's friend, tennis star Serena Williams, proved her worth this week, shutting down a reporter who tried to pry.

Meghan reportedly met Prince Harry when a mutual friend set the pair up on a blind date while she was visiting London back in 2016.

Though Harry had apparently never heard of the actress when he first met her.

At the time, Meghan was best known for her role in the legal drama, Suits. Though in their first and only televised interview together, Prince Harry sheepishly admitted that he had "never, never even heard of" his now-wife. Awkward...

But the pair hit it off immediately.

Though they initially kept their relationship under wraps for the first 6 months, the couple began appearing in public together, and the world was struck by their natural chemistry.

It wasn't all smooth sailing for the actress, though.

The Brits really weren't impressed with the presence of an American in their royal family, were they? Though the majority of people welcomed Meghan with open arms, she was still subject to torrents of horrendous abuse, from both the public and the press.

Kensington Palace was forced to release a statement...

Being a royal isn't all glitz and glamor. In November 2016, Kensington Palace released a statement on behalf of Prince Harry, calling for the sexist and racist harassment of Meghan by the public and media to be brought to an end.

Despite the abuse, Meghan stuck by Prince Harry.

And they announced their engagement the following year. Speaking in an interview with Vanity Fair before their engagement, Meghan had gushed about their relationship. “We’re a couple," she explained. “We’re in love. I’m sure there will be a time when we will have to come forward and present ourselves and have stories to tell, but I hope what people will understand is that this is our time. This is for us. It’s part of what makes it so special, that it’s just ours. But we’re happy."

The couple got married the following year.

In May 2018, the world watched in awe as Prince Harry and Meghan tied the knot in a lavish ceremony fit for a queen... Literally. As is of royal tradition, the pair wed in St George's Chapel at Windsor Castle in London.

And the highly-anticipated pregnancy announcement came shortly after...

It's what everyone was waiting for. In October 2018, 5 months after their wedding, Kensington Palace released an official statement which announced the pregnancy of the newly-appointed Duchess of Sussex.

Speculation over what the new royal addition will look like was rife. Because, let's face it, the baby photos of both Harry and Meghan are nothing short of adorable.

On May 6th 2019, Harry and Meghan welcomed their first child, Archie Harrison Mountbatten-Windsor.

Though the couple have taken a less royal approach with the arrival of Archie.

Rather than giving birth in St. Mary's Hosptial in London, where generations of royal women have delivered their children, Meghan and Harry opted for a private home birth at Frogmore Cottage instead.

And they didn't reveal their new addition immediately.

So people were outraged, obviously. Instead, Meghan and Harry chose to wait 2 days before they introduced Archie to the world, which is quite reasonable if you ask me...

They have remained notoriously private.

The Duke and Duchess have kept their home life extremely private, and haven't shared any pictures showing baby Archie’s face. Though they did tease an adorable picture of his tiny feet on their shared Instagram account, @sussexroyal.

And this month, a shock announcement was made.

Harry and Meghan decided to step back as members of the royal family amidst a barrage of continual negative press. Read all about that, here.

And amidst all the drama, the press has been desperately searching for insight.

Including approaching her closest friends to comment on the situation - none other than tennis star Serena Williams.

Meghan and Serena has a longstanding friendship.

They met at the 2010 Superbowl in Miami, and reportedly hit it off from the get-go. Speaking in a Q&A for DIRECTV's Celebrity Beach Bowl, Meghan discussed how they met, "We hit it off immediately, taking pictures, laughing through the flag football game we were both playing in, and chatting not about tennis or acting, but about all the good old fashioned girly stuff. So began our friendship."

Though details of the baby shower have been kept tightly under wraps, Serena spoke briefly about the event to Business of Fashion: "Planning something like that takes a lot of effort. I’m a perfectionist, so I’m like, 'Let’s make it perfect,'" she told the outlet. "It’s been a lot the last few days."

The shower took place at the Grand Penthouse of the Mark Hotel; it included a flower arranging lesson by floral designer, Lewis Miller, and featured food from Michelin-star chef, Jean-Georges Vongerichten.

And Serena has proven she's a great pal to have around.

Well, you'd never expect anything less from this absolute queen, would you?

Because, in spite of hounding by the press...

Serena seems determined to keep quiet - and to stand up for her pal.

This week, she's playing at the Australian Open.

And obviously, rather than talking about tennis, reporters just wanted a comment about Meghan.

"Megxit" has really rocked the boat.

But when approached by New York Times writer Ben Rothenberg, Serena would not take the bait.

Serena was asked about Meg's "extraordinary and historic" move.

And her response? "Yeah. I have absolutely no comments on anything with that."

In fact, she even called the reporter out.

Check out the video...

It's clear Meghan is lucky to have a friend like Serena.

And to learn more about Meghan and Harry's historic move, scroll on for all the details. Harry's statement brought a tear to our eyes!