Unsolved Mysteries: Serial Killers Like Joe Goldberg From 'You' | 22 Words 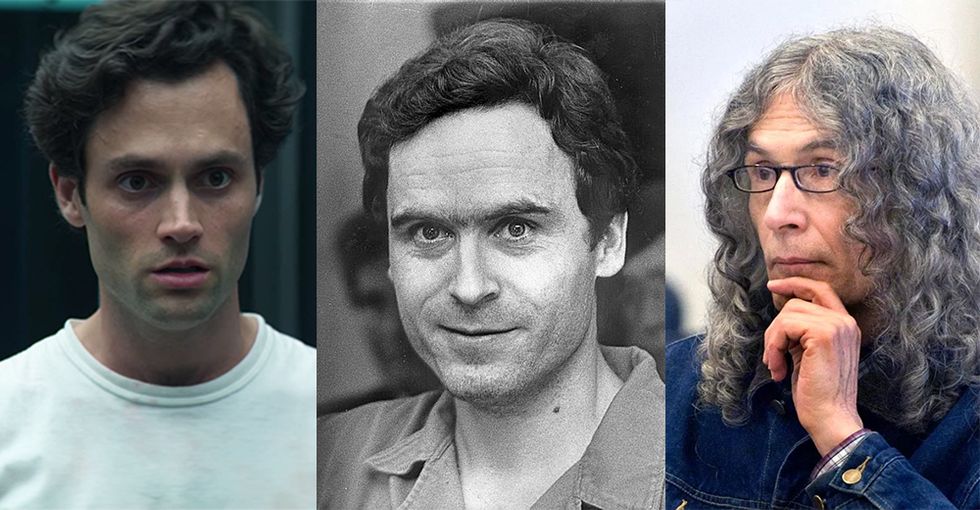 Unsolved Mysteries: Serial Killers Like Joe Goldberg From 'You'

Netflix's hit series You gives its fans a sometimes uncomfortably close look into the mind of a psychopath. And by that, we're obviously talking about its main character, serial killer Joe Goldberg; an obsessive man who uses his charisma to manipulate people. He begins by taking an unhealthy interest in someone and inserting himself into their lives, but in the process of pursuing his romantic interests, Joe graduates from "stalker" to "serial killer." So, what exactly does Joe have in common with the real-life serial killers of the world?

Ted Bundy is one of America's most prolific serial killers.

What do Joe Goldberg and Ted Bundy have in common? Their charm and charisma, of course. When Bundy was captured, everyone could hardly believe he was a serial killer. Such a classy, handsome guy; how could it be him? Well, here's how: Bundy's charm was just a mask, one that he used to get what he wanted--namely, get him within striking distance of his victims. The man had above-average intelligence and put on the facade of living a perfectly normal life to avoid detection. This makes both Bundy and the fictional Joe Goldberg an "organized" killer. Organized killers are the more careful ones, often watching the victim before making their move and disposing of the body in a different location once they kill. They're the type to be more highly educated, and more likely to follow their own crimes in the news. Some organized killers even insert themselves into the investigation itself, messing with police to try and throw them off.

How many murders did he commit?

Bundy, for his part, is responsible for at least 30 murders, which he confessed to in prison before he was executed. However, for all we know, the true body count might be much higher. Deception was Bundy's M.O. when searching for victims. Bundy was considered good-looking, and he exploited that trait along with his natural charisma in order to gain peoples' trust. When hunting for victims, he'd often feign injury or disability, or even pose as a police officer. But once his deception succeeded, the real Bundy was revealed: he'd knock his victims unconscious before taking them to a remote area, assaulting and finally murdering them. True crime biographer Ann Rule, who actually knew Bundy, described him as "a sadistic sociopath who took pleasure from another human's pain and the control he had over his victims, to the point of death, and even after." Thankfully, Bundy was discovered after an attempted kidnapping got him imprisoned, and led to police across state lines connecting the dots between several unsolved murders. He escaped imprisonment twice, the second time going on a killing spree before he was recaptured, but ultimately Bundy was sentenced to death in Florida.

Richard Ramirez, the Night Stalker, is a different kind of killer.

But even though some of Joe Goldberg's kills are organized and methodical, others are totally spur-of-the-moment. He didn't plan them, just acted--and that also qualifies Joe as a "disorganized" serial killer. It's entirely possible for killers to have a combination of qualities rather than sticking to one major stereotype, so Joe likely qualifies as a cross between an organized and disorganized killer. Disorganized serial killers are typically the ones who leave the most evidence behind them: due to the unplanned, sudden nature of their crimes, bodies are often left right at the crime scene, and Joe has definitely done this before (like that jar he left at Peach's house--yuck). A parallel between Joe's more erratic actions can be drawn, between him and one Richard Ramirez, otherwise known as the Night Stalker. Ramirez picked his victims at random rather than engage in careful stalking, and his motives were definitely freaky: he claimed to worship Satan.

In addition to "the Night Stalker," Ramirez has been referred to as "the Walk-In Killer" and "the Valley Intruder." He terrorized California for about a year in the eighties before he was caught, and Ramirez's actions during that time would eventually result in his conviction: 13 counts of murder and 5 counts of attempted murder, along with a string of additional assaults and burglaries. It's pretty obvious why Ramirez would be considered a disorganized killer: his victims are all across the map in terms of age, and he used a number of different murder weapons, from handguns to a hammer. Ramirez began his killing spree at the age of 24, and his already-existing rap sheet along with a witness account and left-behind evidence is what finally ended it. After police were able to match his description and recovered fingerprint to an old mugshot, they released it to the media before Ramirez even realized he'd been identified. Fittingly, a group of civilians were able to spot him while he attempted to flee; they proceeded to chase him, bring him down, and hold him there until the police arrived.

Many are still hoping for some closure in the horrifying tale of the Zodiac Killer because Zodiac has never been positively identified to this day. And while Zodiac only has 7 confirmed victims (5 dead, 2 injured), the number could be higher: along with a list of other murders that the police suspect to be connecting, Zodiac has also claimed to have killed 37 people. The Zodiac is responsible for a string of killings in the late 1960s in Northern California. Police have looked at many suspects for the crimes, but none of the investigations led to an arrest. In fact, the case is still open in several locales: San Francisco, the city of Vallejo, Napa County, and Solano county. Zodiac's modus operandi was typically ambushing young couples visiting a secluded area, and all of Zodiac's victims were between the ages of 16 and 29. Only one of the Zodiac's confirmed kills was a solo attack; the rest were all on couples. Of those couples, only two men survived the attacks.

And a puzzling killer.

When speaking of serial killers who followed their own case in the news, Zodiac has to be referenced: the killer sent a series of taunting letters and cards to members of the press in the Bay Area. In fact, the name "Zodiac" wasn't a moniker given by reporters; it was chosen by Zodiac and signed in the letters. One reason for the Zodiac to stand out against all the other unidentified killers out there (and, unfortunately, there are many) is the nature Zodiac's strange letters to the press. They weren't ordinary handwriting; there were four letters in total, and each letter was a cryptogram--otherwise known as a cipher. Basically, they were encoded messages, and sadly only one of those cryptograms was ever decoded. Currently, the best existing "picture" of Zodiac is a sketch based on witness descriptions, which isn't much to go on, but here's hoping that all the open police investigations mean that there's still a chance we'll learn who the Zodiac really is.

It's common for serial killers to be victims of child abuse themselves. While experts still puzzle over how much of a serial killer's motivation is "nature" and how much is "nurture," the fact remains that childhood experiences shape who you are for the rest of your life. So, in the case of Edmund Kemper, a.k.a. the Co-Ed Butcher, he never really had a chance to be anything but. The same might be said of Joe Goldberg. He's also a child of abuse, having witnessed his biological father abuse his mother and eventually killing him in her defense, before later being adopted by the equally abusive Mr. Mooney, who locked him in a vault underneath the bookstore. Serial killers are often a deadly combination of underlying causes; in Edmund Kemper's case, a few of those causes included being a paranoid schizophrenic and a child of continuous, awful abuse that culminated when he killed his grandparents at the age of 15.

On becoming a serial killer:

Of course, none of the above causes for Kemper's crimes are a guarantee of violence. The vast majority of people with mental health issues and those who suffered abuse as children (or both) lead perfectly good lives with no hint or desire for the kind of violence that Kemper committed. His issues were only pieces of the puzzle, and his instincts to kill must have come from some other part of his brain. And speaking of Kemper's mind, he was also frighteningly intelligent, with a tested IQ of 145. After being released from the maximum-security facility where he was sent for killing his grandparents, it was only a few short years before Kemper began the killings that would result in a total of 8 victims: 5 college students, one high school student, his mother, and his mother's best friend. Some psychiatrists, and Kemper himself, have posited that all of Kemper's prior victims were surrogates for the person he really wanted to kill: his mother.

Like Joe Goldberg, serial killer Rodney Alcala tried his hand at "dating" (at least, as much as either of them could understand such a thing, being who they are). Case in point: in the middle of what was actually his murder spree of the later 1970s, Alcala appeared on the television show The Dating Game. Even crazier: he actually won. Don't worry, though. The woman who was supposed to go on a date with him, having been matched on the show, actually backed out; she found him too creepy! That's exactly why we should always listen to our instincts. Sadly, Alcala has many victims, though the exact number is unclear. It's been estimated that he committed up to 130 murders, but he's only confirmed to have killed 8 people thus far. He collected over 1,000 explicit photos of women and teen boys, so it'd certainly make sense for him to have done other things that the police just haven't connected to him yet.

Alcala has actually been compared to Ted Bundy for his modus operandi of assaulting and strangling his victims, often toying with them in the process. As mentioned before, he'd also take photos of his victims as a sort of trophy--which is the kind of thing that's horrifying and yet could actually lead to solving more of Alcala's crimes. And clearly, law enforcement isn't done with Alcala yet. He's already in prison for the rest of his life (having received the death penalty for his known crimes), and while he's been officially convicted for seven murders, he's actually still in the process of being charged and judged for several other murders right now. In 2013, even, he was given 25 years to life for two murders in New York State, though of course, the actual sentence didn't do much: he's still in California on death row, and has also been "too ill" to travel to Wyoming for yet another murder charge. Share these chilling stories with other fans of You, and see what parallels to Joe Goldberg you can find!