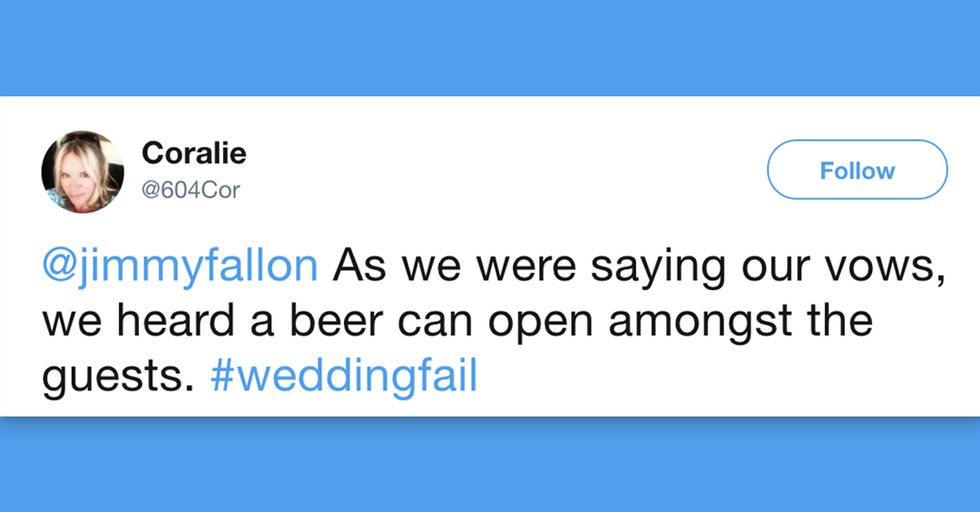 29 People Who Failed So Hard It Was Funny

Look, life is a long and winding journey. Despite our best efforts to have everything under control all of the time, it just does not work out like that. No matter how many precautions we take to make sure everything in life goes right, we are bound to fail once in a while. It is just how life goes.

But one of the great things about this life during which we all fail (and fail hard) sometimes, is that we are never in it alone. There is always someone else who has messed us up just as bad if not worse than you have and knowing that can be comforting. That is why we have compiled this list of hilarious fails. Because sometimes it is nice to know that we all mess up once in a while.

I do feel bad for the model in his GIF.

But I also can't stop watching it. It's comforting in a sense. You see, I am also this clumsy. I get it.

This is hilarious. That's a great picture. I hope this photo made it into the album.

At least she only sent the email to one co-worker! Imagine if it was to the whole office.

At our wedding, my wife’s dad performed the ceremony. He pronounced us Chad and Jina Olbinski. My name is Mike.… https://t.co/MHKa0kSBKJ
— Mike Olbinski (@Mike Olbinski)1526405778.0

Wow, what a mistake to make. I hope he felt bad. Like, really really really bad. You can't see it, but I am shaking my head right now.

My #ResolutionFail was to not do anything stupid &4 days later I got stuck in a baby swing and had to call the fire department to get me out
— Isabella (@Isabella)1484156289.0

This is fantastic. I doubt she was sober when this happened. With a resolution like that, it seems like she had a penchant for doing stupid things.

My dress was the same color as the green screen behind us #PromFail @jimmyfallon https://t.co/MSfRADJgW7
— Emily Peiffer (@Emily Peiffer)1493843517.0

How could she have known that there would be a giant green screen at prom with a starry night background?

Made a resolution to be a safer driver. 3 days later I rear ended someone because I thought I saw Dr.Phil driving behind me. #ResolutionFail
— KRose (@KRose)1484193440.0

To be fair, this would be the proper reaction to a Dr. Phil sighting. Unfortunately, it wasn't actually him.

Who gets three proms?! My school only had a prom for seniors, and honestly, I was relieved because that's only one dress I had to worry about.

What a gorgeous piece of wisdom and advice her dad gave him as they were about to get married. Just beautiful.

I hope that was a mass email. Everyone at the party would have had so many questions.

Let's Get It On

Guests were questioning my relationship with my father when Let's Get it On by Marvin Gaye was played by accident f… https://t.co/xrPG9NlNye
— Leanne Smith (@Leanne Smith)1526405905.0

This is why you have to make sure your DJ knows what they are doing. This must have been quite a moment.

@jimmyfallon As we were saying our vows, we heard a beer can open amongst the guests. #weddingfail
— Coralie (@Coralie)1433401550.0

I hope whoever did this got some serious side-eye. But also, this is why you don't let guests have their beers until after the ceremony.

Oh man. If I was that girl and my date brought me a whole pizza, I would ask him to marry me right then and there.

I honestly love this and now I want a Ring Bear at my own wedding. If I can't get a real bear, a little kid dressed as a bear will do.

#OfficePartyFail I had never been to a sushi restaurant I was eating Edamame and I realize that I was eating the ones people already chewed
— Sapna (@Sapna)1480548530.0

If you have never eaten edamame, it isn't obvious how to do it, and this is a totally understandable mistake! Gross, but understandable.

Resolution: no McDonald's. My sister offered me a danish off of a plate and when I ate it she whispered "it's McDonald's" #ResolutionFail
— taylor (@taylor)1484169231.0

This is such sabotage! So mean. But also kind of funny.

This is why you never wear sticky bras. This is a PSA. They don't work, people!

#AirportFail flight was delayed so I took a nap in the terminal. Woke up to find that someone had taken my sock off and laid it on my head.
— TheAlphaVictor (@TheAlphaVictor)1438209076.0

This is way more creepy than just a fail. But I guess this is also a PSA: Don't fall asleep in the airport.

I was home schooled so I made my own prom and invited my family, they forgot about it so only my cat and I showed up. #PromFail
— Jason Chavez (@Jason Chavez)1493849616.0

This is so sad. But also, a night home alone with my cat probably would have been just as fun as prom.

I can't imagine how many incomplete and auto-corrected texts go out every single day, ruining innocent people's lives.

I mean, Taco Bell is irresistible. It's ludicrous to think that you would never go to Taco Bell.

Wow, get yourself a DJ who doesn't judge you and lets you have a complete first dance with your brand new spouse.

Girls and boys mature at different rates in high school and it is... A) very clear from this photo and B) one of the funniest things.

@jimmyfallon When I was a kid my family went to Disney World and my parents thought they lost my sister so, of cour… https://t.co/jMNyOmsFPI
— Mollie LaFavers (@Mollie LaFavers)1529452187.0

What a rollercoaster of a tweet. I love that they are married now!

Leslie Knope was right: Salad is terrible. More than that, it's evil. This is why you should never try to eat healthily.

A doughnut for breakfast

Last year on New Year's Eve I vowed to stop eating sugar. The next morning I ate a donut for breakfast. #ResolutionFail
— Carly Litten (@Carly Litten)1484171750.0

Here's the thing about sugar: It's delicious. And it would make you really unhappy to cut it out of your diet.

This woman thought she was being cursed out in a work email! This is an embarrassing story all around.

@jimmyfallon my mom emailed me and said "your dad and I are going to divorce next month" she meant to say disney #EmailFail
— Duck Eater (@Duck Eater)1424901072.0

What a cavalier way to communicate something so serious! Share this with someone who could use a win right now.