Server Gets Stiffed For an INFURIATING Reason | 22 Words 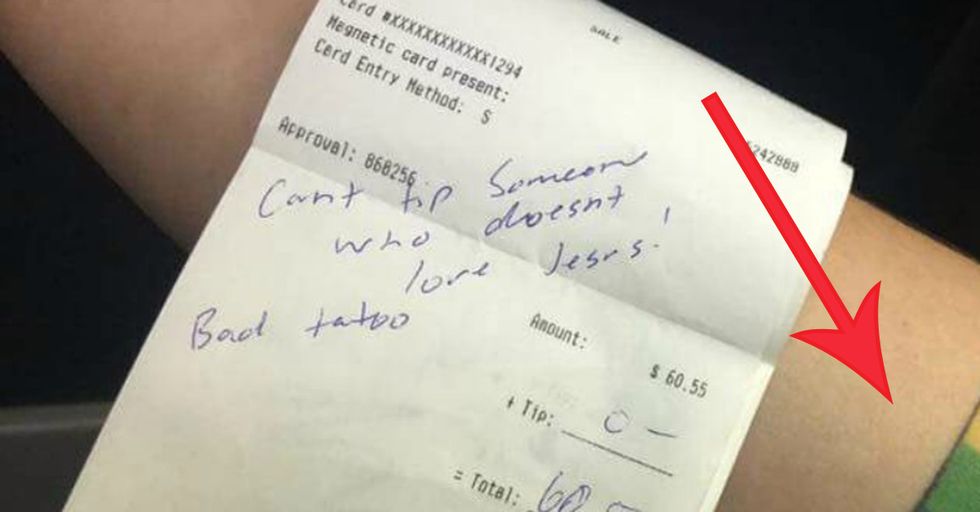 Server Gets Stiffed For an INFURIATING Reason

Working in the food industry can be bad enough on a normal day, but add nightmare customers and stingy tippers and it can become downright torturous. This server had to deal with both recently.

Samantha Heaton, a server at Buffalo Wild Wings, had finished waiting on customers at an Illinois location when she went to collect their receipt. The "tip" that the customers left was not the one she expected, and it's going viral for an infuriating reason.

Keep reading to hear the whole story and to see how the Internet has rallied around her.

On August 5, a friend of Samantha's posted this image of the receipt on her Twitter page.

The note says "Can't tip someone who doesn't love Jesus! Bad tattoo." The judgmental note is accompanied by a big fat zero in the tip line. So not cool.

Samantha's tattoo is an equals sign filled in with a rainbow pattern.

The post has blown up, and the response to the slight has been truly amazing.

Several posts of support had users showing off their own equals sign tattoos.

The equals sign represents the support of equal rights for members of the LGBTQ community.

Many called out the hypocrisy of these so-called "Christians."

The insinuation that someone they know nothing about doesn't "love Jesus" simply because they support equal rights is insanity.

Of course, because it's the Internet, not all comments were positive...

But the supportive comments far outweighed the negative ones. Emily posted Samantha's Twitter handle on the original thread so users can message her directly.

Some have even expressed interest in donating money to get her that tip that she very rightfully earned.

The generous nature of strangers can be seriously heart-warming. Although some were quick to call the post a money-making scam.

While Samantha hasn't commented publicly about the incident, her friend Emily made a point to say that this wasn't about the money.

She states several times that it was posted to create awareness, and any money raised would be donated to a good cause.

Spreading kindness is always the right move, and the response from Twitter helps to restore our faith in humanity.

Jesus would definitely tip his waitress.