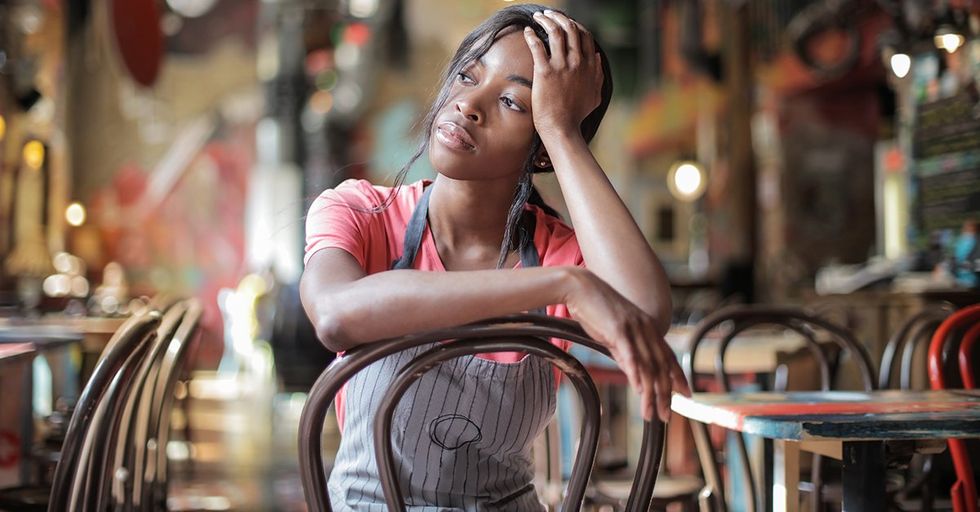 Servers Tweet About the Dumbest Things Their Customers Have Ever Done

I haven't spent much time working in food service. This is mostly because I couldn't survive it. I spent about 6 months as a server at a pizza restaurant, and I hated pretty much every second of it. I wasn't good at it, and the customers were pretty darn awful.

Then I worked at a coffee shop for a little over a year. I was better at that job, but the customers were even worse than the restaurant.

All this is to say that working in the food service industry is really, really hard. I'm not saying other jobs are necessarily easy. What I am saying is that I think every single person should have to work either a retail or food service job at some point in their lives so that they learn not to treat in these industries poorly. And I'm not the only one who thinks so!

Now, first of all, the Twitter user is obviously exaggerating when comparing food service to the work the Marines do. However...I think they're really onto something with the rest of it. And so do a lot of other people.

A *bunch* of people started replying with some of the dumbest — and rudest — things they've ever experienced while working in the food industry.

Like this Twitter user, who had a customer purposely spill her drink just so they would have to clean it up. I mean, seriously?!

It gets worse from there.

"That's what you get paid for" might just be the worst thing one human can say to another. It's certainly pretty high on the list.

It's also illegal to make someone deal with biohazardous waste without the proper equipment! Shame on you, Yogurtland.

Never underestimate how dumb someone can be when actually thinking they're pulling the wool over your eyes. The limit does not exist.

Can you be a bit more specific?

You should probably be thankful you can't read their mind. I can't imagine it'd be an especially engaging read.

Did she want the lettuce cooked?

Otherwise, there's no reason for this. But expecting to use logic on customers when you work in food service is very, very foolish.

Ah, yes. There's nothing quite as satisfying as the passive-aggressive reaction.

Again, no one is trying to discredit the contributions of the military. They're just saying that the food service industry is BAD.

I'd be feeling salty after this one.

While working at jimmy johns, a lady came in and said her roast beef sandwich was salty. she later admitted she put salt on it herself...... ??‍♀️

Hmm. I wonder why it was so salty. There must be some explanation...

I guess some people don't know this, but if you're going through the drive-thru, you wait for the restaurant worker to greet you! They have a bunch of different jobs and aren't immediately ready for you to start talking at them.

Totally worth it. This guy definitely made the right call.

If only you had clearly marked that table as being reserved. What's that? You did. Oh.

Shall I grab a dictionary for you?

I know this might be hard to wrap your head around, but "spicy" means that something is spicy. Go figure!

I hope you didn't do it.

I'm trying to think of a single situation in which telling someone to clean your shoe would be appropriate. Maybe at a shoeshine booth? Otherwise, not at all.

Do you know what a quesadilla is?

Once again, there's no limit to the stupidity customers an exhibit while ordering what they want to eat or drink. Keep your expectations as low as your barely livable wage.

You'll always have people who try to game the system. It's best to try not to let them get to you. Good luck with that, though.

I also saw The Help.

While working at jimmy johns, a lady came in and said her roast beef sandwich was salty. she later admitted she put salt on it herself...... ??‍♀️

Look, I worked at a pretty popular coffee shop in LA. I served coffee to multi-millionaires. You know what they never did? Talk to me about how important they were.

It's called "a food service job." I hope she ends up working one someday.

He was mad at Pandora, got into an argument with the bartender, and then stiffed YOU on the tip? What a chucklehead. I hope he never heard that song again.

It sounds like this person had to reopen the place to serve the customer. And that's just the ding dang dong worst thing ever.

Even the sandwich artists are attacked.

@ghetto004 A customer at Subway made me remake her sandwich because the bread wasn’t cut perfectly straight and argued with me about it
— jennifer (@jennifer)1536875620.0

I'm not saying I know your life or anything. But if you're going to argue with someone at Subway about the way your bread is cut, you've got problems.

Is this a thing?

Are you supposed to lay napkins down from right to left? Have I been wrong about the placement of napkins for my entire life?

Okay, real quick — a dollar for butter on popcorn? That is kinda nuts. But you know what I'd do if you ever charged me a dollar for popcorn butter? Give you a dollar. Or go without butter.

As far as I'm concerned, this is the only appropriate reaction when someone tries to pull the "do you know who I am?" card. I hope I get to use it someday.

I mean, you forced him to put it there and run over it, right? That's the only way his demand would make sense.

This one takes the cake.

At the end of the day, she was the loser here. She didn't get to eat those wings! Share this with someone who knows about working in food service is not easy!