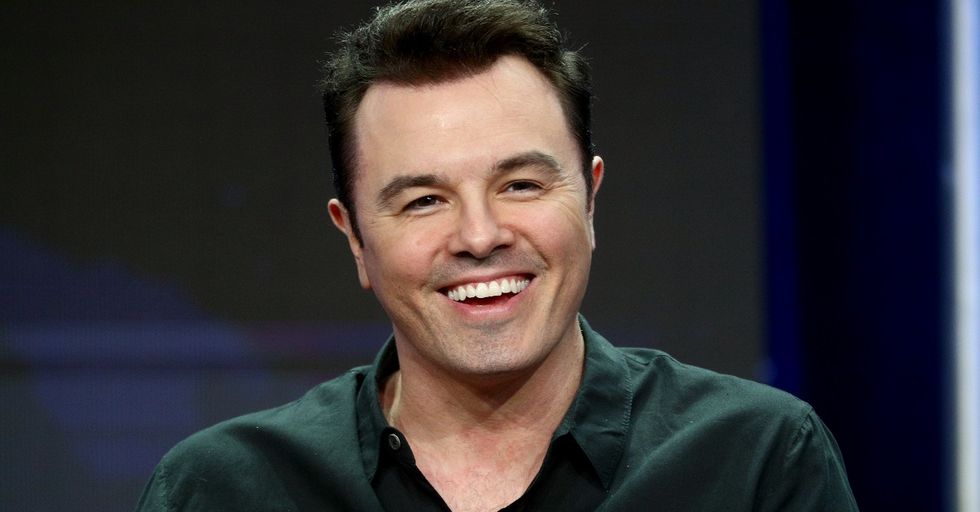 The recent "revelations" about Harvey Weinstein's behavior are proving to be anything but. With numerous women coming forward, the reality is sinking in that this man's predatory behavior was an open secret in Hollywood. One major star, Seth MacFarlane, was called out as having made a joke about Weinstein's proclivities back in 2013, and he took to Twitter to explain why.

Four years ago Seth MacFarlane made a joke that not everyone totally got.

While announcing the Best Supporting Actress Nominations for the Academy Awards, MacFarlane joked that these women "no longer have to pretend to be attracted to Harvey Weinstein." Though this may have gone over the heads of most viewers at home, the audience in the theater certainly understood it.

Now that the accusations against Weinstein are public, people are realizing just what an open secret this was.

It was something that it many were aware of inside Hollywood, implying that a lot of people may have been complicit in his behavior. The stories of Weinstein's assistant helping arrange and facilitate many of the meetings where harassment and assault took place don't exactly help dispel this notion.

And MacFarlane wasn't the only comedian making jokes about this.

It's not just Seth MacFarlane—Hollywood hinted at Harvey Weinstein many times over the years.… https://t.co/0M89YPflLj
— Anna Menta (@Anna Menta)1507832226.0

People noted that in an episode of 30 Rock, the character of Jenna Maroney brags about turning down an opportunity to sleep with Harvey Weinstein in exchange for a boost in her career.

In light of the allegations, these jokes no longer seem very funny.

People see nothing to laugh about now that they've realized these jokes were a way of quietly tolerating a man who has been accused of rape. And the question of why Hollywood big shots decided to make jokes about the matter, instead of doing more to protect women, became a big part of the conversation.

Recently, MacFarlane finally came clean about what was behind his insidious joke.

In it, he admits to having known of at least one instance in which Weinstein had harassed a co-worker and friend of his. This is what he claims inspired the joke, which he says was meant as a firm insult toward the mogul's behavior. But that explanation didn't satisfy everyone. So what did people have to say about it?

Many noted that making a joke doesn't technically count as doing something.

If anything, this only added to the confusion. How could so many people know about — and tolerate — such a sinister secret? It's hard to swallow that those claiming to be outraged now could've been so tolerant in the past.

He was now front and center, serving as the most obvious and visible representative of a system that seemed complicit. People who were angry about Hollywood covering up these horrible crimes now had a very public persona to direct their outrage at.

But the alleged victim, and friend of MacFarlane's, Jessica Barth, spoke up to clarify things.

My friend Seth was respecting my wishes. Please be sensitive to that. https://t.co/0mlKILxqhI
— Jessica Barth (@Jessica Barth)1507750950.0

She noted that she had not wanted to go public with her allegations at the time, something many victims of harassment and assault find extremely difficult to do. MacFarlane, Barth claims, was merely respecting her privacy by not doing more.

MacFarlane doesn't have the best track record when it comes to women's issues. He's often been accused of misogyny. In fact, the same year he made the Weinstein joke, he was called out for singing a song at the Oscars about actresses who'd shown their breasts in movies. Some saw this as an attempt to humiliate women who'd made themselves vulnerable on film.

So people were less than impressed.

There's certainly a point to be made about some of the jokes MacFarlane has written, and whether or not they're symptomatic of a larger Hollywood culture of disdain for women. Despite that, Barth continued to speak out in his defense...

She continued to stand by her friend.

To everyone bad mouthing Seth, how about applauding him for being one of FEW men in Hollywood speaking out! @SethMacFarlane
— Jessica Barth (@Jessica Barth)1507751207.0

She noted that while many may be disgusted with what they see as his tolerance for sexual harassment, MacFarlane was actually going against the grain by saying anything at all. After all, there are plenty of powerful men in Hollywood, but none of them are on record as trying to shine light on harassment and assault in any way all. Even though it was with a joke, it was, some might say, a small step away from a culture of silence.