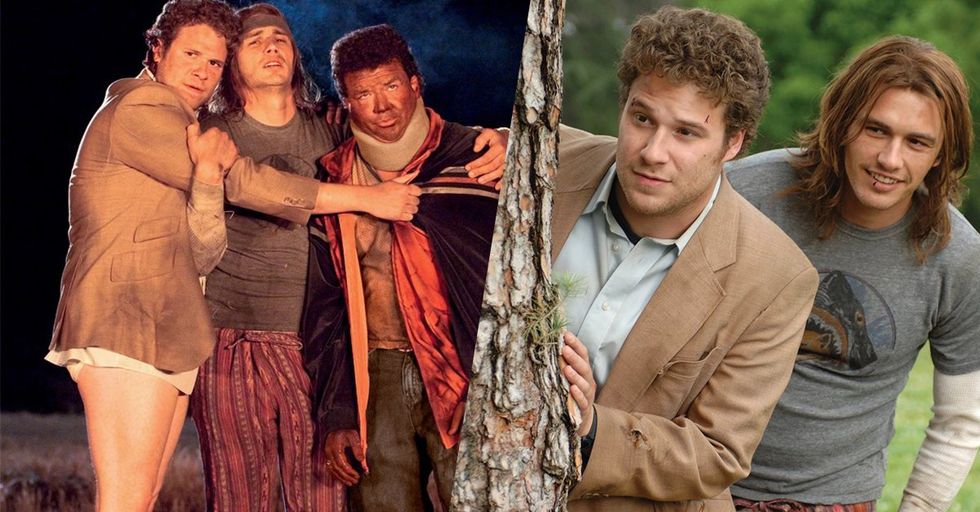 This week, Seth Rogen, who co-wrote Pineapple Express, tweeted some interesting facts about the making of the movie in celebration of its ten year anniversary.

So grab your favorite mind-altering substance and get ready to laugh (possibly louder than you should and at things that don't make sense to anyone else): here are 21 hilarious facts about Pineapple Express.

Rogen started off his thread with a poster from the movie.

Can you believe it's been ten years?

According to Rogen, he had to roll all the joints in the movie because nobody else knew how.

Apparently, James Franco doesn't smoke pot. Although it's hard to believe nobody else on the entire crew could roll a joint. Or at least watch a YouTube video. But apparently, Rogen cares about attention to detail.

I'm sorry, what were you saying, Devon? I got distracted imagining you floating off the ground dancing with Christina Ricci.

According to Rogen, the name for the movie came from a weather phenomenon.

A fan pointed out that it's also the name of a train in Hawaii.

How often do you think the Dole Plantation has to ask people to stop lighting up joints in the front of this sign? Daily? Hourly? But that's not all Rogen shared! Turn the page for more facts about Pineapple Express!

As far as Rogen knew, there was no strain of pot called Pineapple Express before the flick.

You can bet that you can find some now.

Apparently, the movie was full of injuries.

The bong they hit Danny McBride with was supposed to be fake and break away when it hit his head. Apparently, it did not.

Didn't matter to McBride, who continued filming even after the incident.

And I bet you thought the most dangerous thing that could happen to you while smoking pot was accidentally eating an entire pizza in one sitting.

And James Franco wasn't even high.

That photo would have completely different connotations today. The next fact is totally unexpected. Read on to find out who Seth Rogen originally cast himself as in the movie.

Originally, Rogen and Franco had each others' roles.

Do you think they made the right choice?

It's hard to imagine the movie with the roles reversed.

The characters improvised a lot of lines in the movie, and would often use each others' jokes from previous takes.

Superbad came out a year earlier than Pineapple Express, though!

Danny McBride was so funny they literally brought him back from the dead for more.

Danny McBride had to spend a whole day taped to a chair.

That had to hurt to take off at the end of the day. On the next page, find out why there were so many injuries on set.

Did you know Seth Rogen is quite the stuntman?

Well, sort of. He ended up hurting himself a lot.

Ford didn't want to be involved in the movie.

This is what the Daewoo Lanos looked like, if you're having trouble picturing it.

Apparently, there was a billboard for the movie that blew real smoke into the air.

In retrospect, it would be kind of confusing.

You can watch the trailer here. Guess which well-known star didn't get cast in the movie for a super ironic reason. Read on!

Seth Rogen made sure to get his favorite shoes in there.

Again with the details.

Some jokes in the movie were inside jokes added later.

Rogen wrote the original script for Pineapple Express in 2001, but it wasn't picked up until after he had success in other movies.

Kanye West was a fan.

This fact might be the most insane of them all!

Bryan Cranston auditioned but wasn't cast because he wasn't scary enough. Not surprising, considering his biggest role before this movie was the goofy dad in Malcolm in the Middle. But soon, he'd star in Breaking Bad and become one of the scariest drug dealer characters of all time.

Well, that was fun!