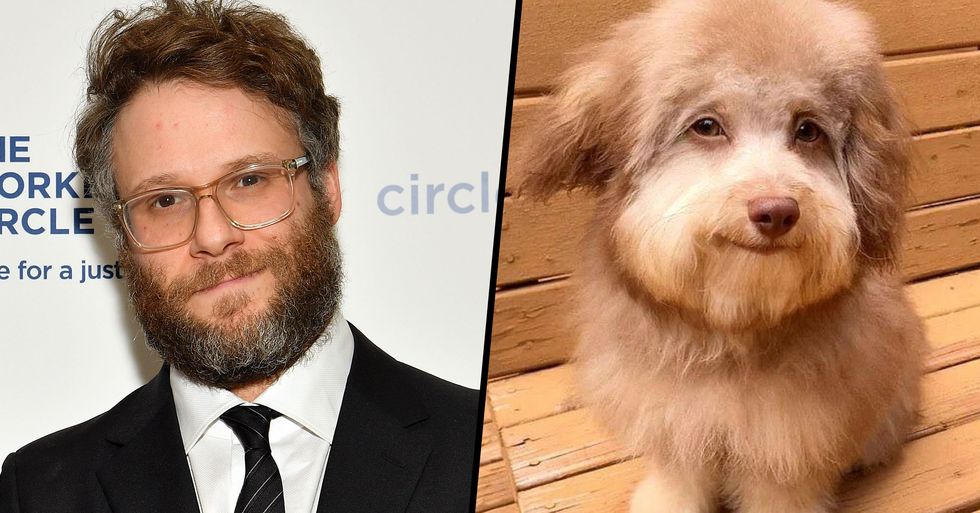 Seth Rogen is a beloved entertainer. When he's not giving us some of the most hilarious movies out there, he's smashing it with the social media content. But his latest move might just be our favorite yet ...

In recent months, a picture of a dog with an oddly human-esque face has been circulating. Now people are realizing why it looks so familiar. It's basically the animal version of Rogen! Scroll on to see what we mean - plus Rogen's hysterical response.

Another day, another viral pet.

Whether it's cute cats or adorable dogs, it seems us humans just can't get enough.

From Grumpy Cat to Boo the "teddy bear" dog, some of these pets have earnt more bucks than we could imagine.

One doggo has been turning heads for his unique features.

Yep, really. Keep scrolling to see the snaps for yourself.

Nori is an Aussiepoo mix (Toy Australian Shepard and Toy Poodle) who's become famous for his human-resembling face.

He lives with owners Kevin Hurless and Tiffany Ngo from Seattle.

They say his human-like features often cause them to be stopped on the street by strangers who comment on his unique little face.

His features were more prominent as a puppy.

"When he was a puppy, we couldn't go more than a block without someone stopping us to ask questions about him," Kevin explained.
"It has become less frequent as he's gotten older, but we still often hear about how human his face and eyes look."

Many think it's his eyes that give him his human look.

And he often looks like he's smiling. "Nori is incredibly sweet and friendly, and very energetic and playful. He loves all people and dogs that he meets, and just wants to be friends with everyone."
"He's got quirky behavior, like when he 'kneads', where he'll put a toy in his mouth while he kneads with his front paws like cats often do."

Nori has been compared to Jeff Daniels and Chewbacca in his time.

But now the internet is claiming they've found and even uncannier resemblance - Seth Rogen!

Some of the images were slightly horrifying.

Like this morph, which will forever haunt our nightmares.

The internet can be a truly weird place sometimes.

Rogen has had an incredible glow-up over the years - but his latest form might be his cutest yet!

But it was Rogen's response that made the whole thing so funny.

Rather than being annoyed at his canine comparison, he seemed genuinely pleased with his new lookalike! And just when you thought you couldn't love Rogen anymore, though, scroll on for a truly epic credit he's been given by none other than Snoop Dogg.