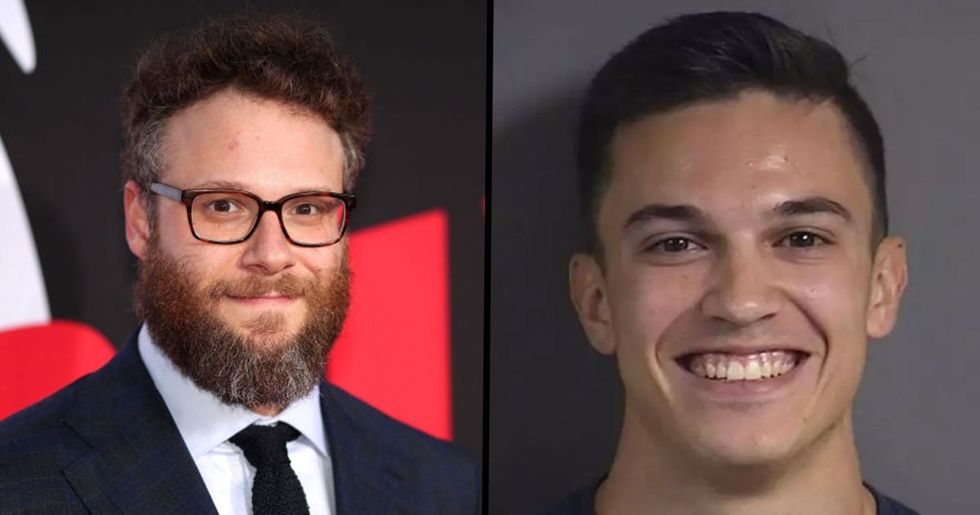 Those are the famous words from the movie, Superbad... And they're also the famous words that will certainly get you turned away from a bar. Since the movie's release in 2007, the name McLovin has become the universal red flag for a fake ID. So, anyone who actually gets away with one of these ID's, well... Bravo.

And one young man has accomplished the impossible because he actually managed to get into a bar with a McLovin fake ID. Legit. However, he was soon arrested after an officer spotted him and put two and two together. We all know an underaged kid when we see one.

The story obviously went viral, and now the show's creator, Seth Rogen, has responded in the most amazing way...

Superbad is one iconic movie.

The film, which was written by Seth Rogan and Evan Goldberg, tells the tale of 3 high school students who are eager to attend the coolest party of the year to commemorate their final days in high school. Sounds pretty familiar, right?

That's why the movie is so successful...

Because it is just so damn relatable.

It shows the boy's journey as they attempt to get their hands on some booze....

The boys need to get a fake ID. Obviously.

The movie centers around their journey in illegally acquiring alcohol...

And ultimately impressing the girls they've had crushes on since the beginning of high school. Again, obviously.

After much deliberation, the boys settle on getting one fake ID to share between the 3 of them, and the baby-faced Fogell steps up to the challenge. What could possibly go wrong?

As predicted, his ID is nothing short of ridiculous.

Fogell has opted for a Hawaiian driving license complete with the birthday 06/03/1981... Which would have made him twenty-six-years-old at the time of the movie.

Putting aside the Hawaiian nationality and the quite obviously fake birthday, it is his choice of name that stuck out to most... McLovin.

No first name, no last name...

And still remains that way today, over a decade on.

But it is apparently an inspiration to some...

Because one eager young man actually used the same name and birthday on his own fake ID. You have to give him 10/10 for effort...

He clearly thought McLovin was a convincing name choice...

Because maybe not everyone has seen the movie...?

Or Daniel Alfredo Burleson, as everyone else knows him.

The incident happened in his home town of Iowa...

Burleson, who's twenty-years-old, had somehow managed to get into the bar with the ridiculous piece of ID.

But he was confronted by police inside the bar after he'd purchased an alcoholic drink...

The youngster was approached by an officer at around 12.30 am, and it is claimed that he admitted to drinking vodka, but didn't provide his ID. He was subsequently removed from the bar and eventually ended up handing over the document which showed he was underage.

He initially tried to deny having a fake ID...

We've all been there. However, when Burleson was flipping through his wallet, the cops spotted a Hawaiian ID card featuring the name 'McLovin' with the date of birth as 3 June 1981.

The police were having none of it and swiftly arrested Burleson.

He was visibly intoxicated.

According to FOX, authorities claim that Burleson "smelled strongly of ingested alcohol and had slurred speech and bloodshot watery eyes'. He was also wearing a wristband from the bar, police said.

He was taken into custody.

And held on suspicion of possession of a fictitious license, unlawfully possessing alcohol, public intoxication, and being under the legal age in a bar.

Luckily, he wasn't taken to jail...

KCRG reported that Burleson was initially taken to Johnson County Jail, but was released and is scheduled to appear for a preliminary hearing on the possession of a fictitious ID charge on 21 October. Moral of the story? Don't buy fake ID kids. And, if you do, don't use the name McLovin.

As for the creator of McLovin?

Yes, folks. McLovin is not real. He is infact a figment of Seth Rogen's quite brilliant imagination.

Seth Rogen and Evan Goldberg teamed up to write the movie.

It's no secret that the movie was originally written by the pair when they were teenagers - And the plot revolves around dramatized versions of themselves, hence why the main characters are named Seth and Evan.

Rogen has discussed the creation of the movie in the past.

And has confessed that many of the antics depicted in the film are based on real events. He explained, “Evan Goldberg [and I] started writing it in high school when we were 14 years old and a lot of that stuff [in the movie] actually happened. The relationship between us is totally fabricated for the movie."

Of course it did. "The whole fake ID concept happened." Rogen said,  "Fogell is actually our other best friend and all the names in the movie are people who went to high school [with us]."

Though we're not sure whether the name McLovin was used...

Either way, it's clearly made an impression on some.

So, what did Seth have to say about the young man's exploits?

Does he feel proud of creating such a monster? Did he just laugh and carry on smoking pot? Did he disapprove?

Well, he responded in the most Seth Rogen way ever.

By simply tweeting, "My work here is done."

Superbad fans were loving it.

Though some pointed out that Rogen should at least pay the young man's bail... It is kind of his fault after all.

Many people simply thanked him...

For being a simple comedic legend... Or for giving us McLovin in the first place.

And, on behalf of all the underage kids out there, thanks for bringing McLovin into our lives.