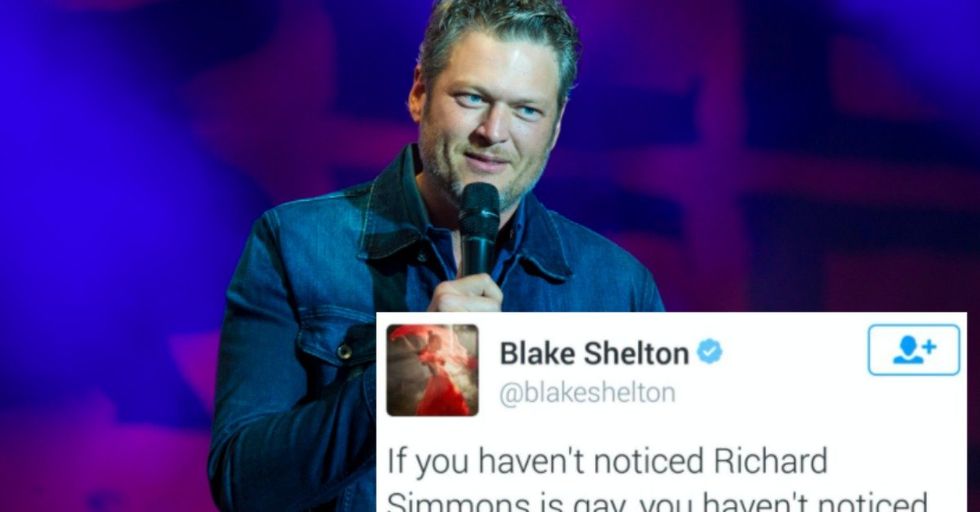 A lot of terrible things happened this week, and one of them was that country star and judge on The Voice Blake Shelton was named People Magazine's "Sexiest Man Alive." The Internet was not happy.

But now there's more to be unhappy about. Turns out Blake has a history of sending out homophobic, racist, misogynistic, and terribly unfunny tweets. Yesterday you may have asked yourself, "How thoroughly does People Magazine vet their 'Sexiest Men Alive'?" Today, you have your answer: not thoroughly enough!

Almost everyone believed that all other men must have died or hell must have been frozen over if Blake Shelton is the sexiest man in the world. We assume probably Gwen Stefani feels differently, but we cannot confirm that.

Anyway, it became apparent very quickly that while Shelton is not very sexy, he is pretty racist and homophobic.

Twitter user @MusicFactsTea compiled a bunch of strange, super unfunny and very offensive tweets from Shelton. They may be from 2009, but Blake Shelton was also an adult back then, and that didn't seem to stop him.

What does it even mean? Oh, right, it means that Blake Shelton is a homophobic a** who objectifies women. There's honestly no other explanation.

Exhibit two isn't any better. In fact, it's just as bad.

This is your "Sexiest Man Alive," People Magazine. Tweets like this — in addition to that terrible mullet — are what make him so unsexy.

Incredibly, we're not done yet. Another diligent Twitter user compiled whole strings of problematic Blake Shelton tweets from back in the day.

They run the gamut from racist to misogynistic to homophobic. Twitter user @rhea_xcx hashtagged her finds #blakesheltonisoverparty, and man, we hope it's true. Let's take a look...

Blake Shelton seems to have a weird obsession with saying mean and uncalled for things about gay people.

But don't worry!!! He also threw in a tweet about a "fat ugly bitch" he used to date. Look, these might be his (sad, sorry, pathetic) attempts at humor, but none of that forgives the perpetuation of stereotypes and offensive language.

There are plenty of ways to try to be funny without offending everybody under the sun.

Unfortunately, Blake Shelton hadn't figured that out when Twitter became popular. "Nothing says 'Happy 4th of July' like a airport shuttle bus driver that can't speak a F***ING word of English!!! To the terminal Omar!!!!" Yeah. No thanks.

These tweets were uncovered a while ago, and Shelton issued an "apology" for them last year:

Of course, "I am bad at comedy," isn't an excuse or an apology for being wildly offensive. Though it is a fact. Nice choice, People Magazine.