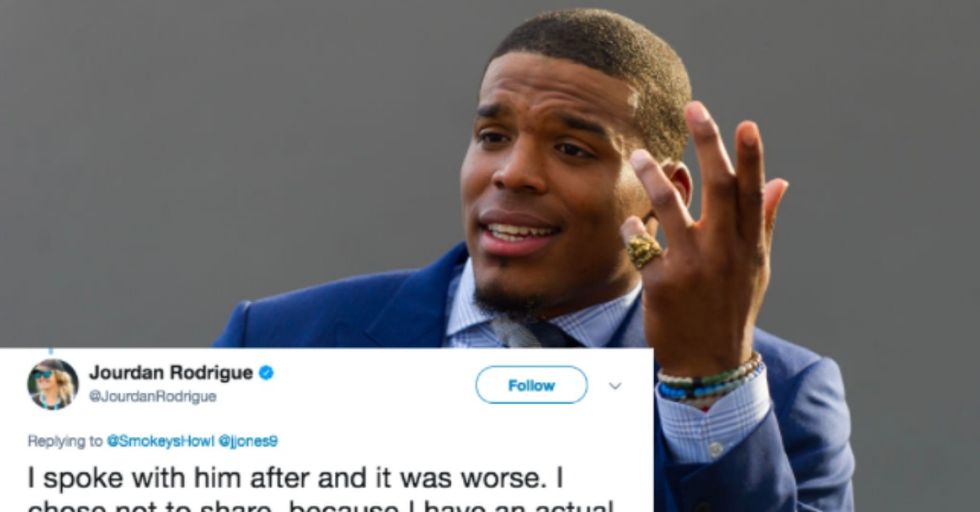 Strap in, folks. This is a doozy.

Carolina Panthers quarterback Cam Newton is now probably regretting laughing in the face of a sports reporter who asked him a question about a receiver in a press conference on Wednesday, October 4.

He laughed, of course, because she was a woman, and he found it "funny" that "a female" could talk about football intelligently, even when it's her actual job to do so.

The video exists, and yes, it's extremely cringeworthy.

Here it is. Here is the moment Cam Newton evidently forgot it's 2017 and that women are full-fledged human beings who can be interested in — and yes, even work in — sports:

Jourdan Rodrigue is a beat reporter for the Carolina Panthers. As she's asking her question, you can see Newton start to smirk, not listening to her question as much as he is stunned and amused by the fact that she's even asking it. Then, he actually says, "It's funny to hear a female talk about routes."

Brutal, sexist answer from Cam Newton in response to good question from female reporter. And the body language was… https://t.co/8VDAX6zvFJ
— RandBall (@RandBall)1507152611.0

For anyone who doesn't believe sexism is alive and well in our society, who somehow doesn't think that women face this kind of automatic dismissal from men in the workplace every single day, I submit this video, on repeat, forever.

There are many many professions that are still difficult for women on a regular basis. Sports reporting is one of them. It shouldn't be the case, but until men like Cam Newton face the backlash they deserve for overt sexism like this, nothing will change.

Some questioned why Newton was being chided on Twitter when someone should have addressed him in person. Rodrigue had this answer:

Women spend so much time just trying to do their jobs and live their lives. They so often have to truck through sexism and grossness that to make a stink about every microaggression (or even macro-aggression) would be more exhausting than just trying to move on.

Rodrigue's official response is so disheartening, too.

Not only did Newton "belittle" Rodrigue and her colleagues, he didn't seem to see how what he did was wrong.

There's no spinning Newton's shocked face as a woman was asking him an intelligent question about football.

There's no excuse for his comment about finding it "funny" that "a female" could talk about routes. Obviously, a sports reporter — whose job it is to report on sports — would know what she's talking about.

Not to mention, according to noted Twitter "female," @goldengateblond, Newton isn't doing so hot with routes himself.

His QBR (quarterback rating) is 25 out of 32, which puts him prettttttty far down the list. He should probably quit his sexist smirking and get back out on the field to practice. He needs it.