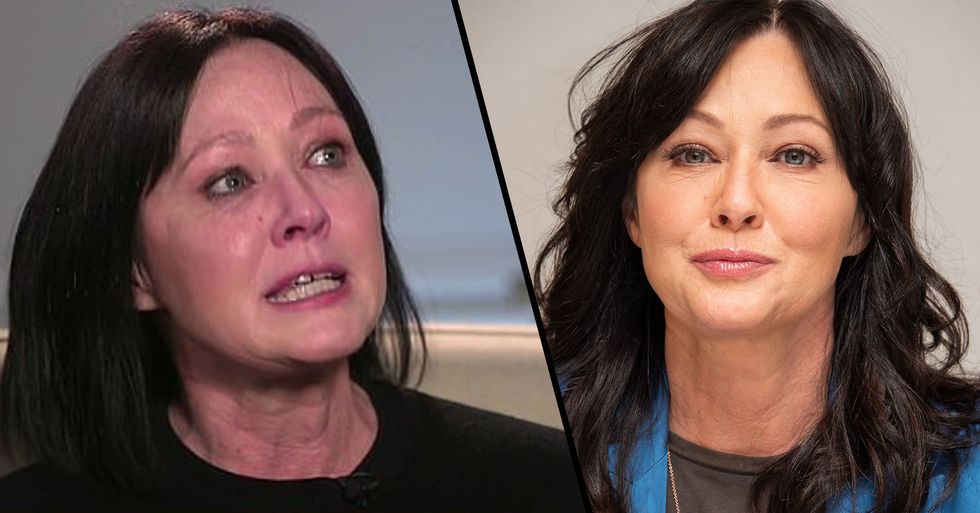 Doherty wants to get ahead of the papers being released about her ongoing lawsuit, which contains sensitive information about her current health problems.

Keep scrolling to watch the interview in which she opened up about this heartbreaking news.

Actress Shannen Doherty has come out with shocking news.

The actress appeared on Good Morning America on Tuesday morning to share her story.

She has revealed she has stage IV cancer...

3 years after going into remission following a previous brutal battle with cancer.

She was first diagnosed with breast cancer in 2015, then went into remission in 2017.

The cancer came back aggressively early last year, which she has kept private, but wanted to reveal it this week before it became public.

She was worried to tell her mother and husband.

"It’s going to come out in a matter of days or week that I am Stage 4, my cancer came back and that’s why I am here."

"It’s a bitter pill to swallow in a lot of ways," she said, adding: "I'm petrified. I'm pretty scared."

"My mom is a ridiculously strong courageous human being. So is my husband, but I worry about him," she said.

She wanted to share the news before it became public in court papers.

Doherty's home was damaged in the Wolseley fire, which she is trying to claim against State Farm to repair some of the damage. Doherty says it has been one of the hardest things she has ever done.

Papers that are part of her trial, where her cancer is revealed, will become public this week.

She believes she is entitled to more than the $1.1million the company has already paid her.

She said she wants to get ahead of the news becoming public.

"I want to control the narrative. I want people to know from me," she said.

She said the lawsuit has been a grueling process.

"My house was severely damaged. You walked in and it just reeked of smoke. I tried - I communicated with my insurance company. I called, I got passed around, claims adjuster to claims adjuster."

Doherty hopes she is remembered for her battle against State Farm.

"I think the thing I want to do the most right now is make an impact. I can through this lawsuit and by saying enough is enough with big business and corporations running the little person into the ground."

"It's not fair and I'm taking a stand for all of us but it's more about how I want to be remembered for something bigger than just me," she said.