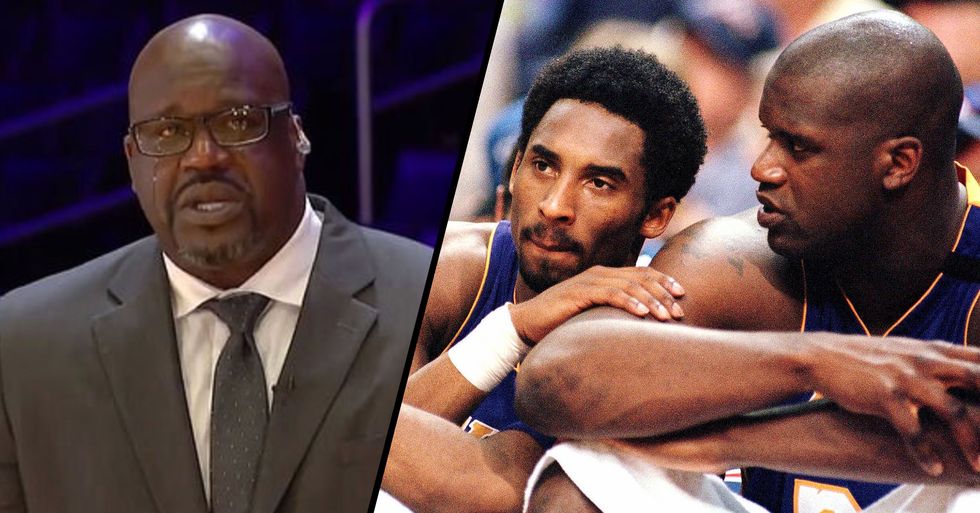 The world was left devastated by the heartbreaking news that legendary NBA player, Kobe Bryant, died in a helicopter crash on Sunday morning - he was just forty-one-years-old.

Families have been left distraught, feeling immense pain for the rest of the family. And life-long friend, Shaquille O'Neal has written a heartbreaking tribute to his "brother and niece." But the news is having an impact on his health now.

Shaquille O'Neal has spoken out now in an interview, and it is truly heartbreaking to watch...

And now, Shaquille O'Neal has spoken out.

As any NBA fan will know, the former LA Lakers players had a controversial relationship after Kobe discussed Shaquille's work ethic during an interview at the PHP Agency Convention in Las Vegas, per Fox Sports.

But after years of feuding...

The pair reconciled their friendship and they decided to put the past behind them.

Kobe even confirmed this himself...

Tweeting about it back in August of 2019, Kobe said, "There is no beef with @SHAQ ... I know most media want to see it but it ain’t gonna happen. Ain’t nothin but love there and we too old to beef anyway #3peat."

The pair remained close over the years...

Shaquille poured his heart out in an emotional post...

"There's no words to express the pain I'm going through with this tragedy of losing my niece Gigi & my brother @kobebryant, I love u and u will be missed," he wrote on Twitter.

"My condolences goes out to the Bryant family and the families of the other passengers on board. IM SICK RIGHT NOW," he finished the tweet with.

He elaborated on the current status of his health in his podcast.

He said: "I'm not doing well, I'm sick." He also admitted he has not been eating or sleeping properly.

Things get worse as he opened up about his sister's death.

The basketballer recently lost his sister also and before even coming to terms with that tragedy, the death of his long-term friend, Kobe Bryant, hit him too.

During the podcast he said this:

"It just hurts... I’m just getting over the death of my sister. You guys told me the other day when I came in, I looked like I needed some rest. And I haven’t been sleeping after Ayesha’s [his sister's] death."

He explained how he wished he and Kobe had more time together...

"All the stuff that is documented between us .. this is what brothers do."

Despite the feud, he completely respected the late basketball legend.

"I love Kobe Bryant. I'm the first to say, I've got 4 rings ... I couldn't have gotten 3 without him." He emphasized how much respect he had for Kobe.

He also revealed that he reached out to Vanessa after hearing about the accident:

"[She] lost her beautiful GiGi who was born on the same day as my thirteen-year-old daughter and that's what really hurts."

"We're still are the best duo ever created, that's never gonna change, but I wish we were 60 or 70 in the old folks home talking about it."

This is a terribly hard time for all the friends and families involved...

Our thoughts and condolences go out to all of the victims of the accident and their families and friends who are undoubtedly suffering at the moment.

Shaq shared he had been working out with family when he heard the news.

He spoke at the Staples Center on Tuesday night and could barely hold back tears talking about legend, Kobe Bryant.

His nephew broke the news to him.

'I snapped at him and said "man get that out my face",' he said with tears streaming down his face.

He admitted he struggled to believe the news.

Until he started receiving phone calls. He spoke about how 'sharp' the pain was when he realized what had happened.

The death of Bryant brought up buried feelings.

He had just lost his sister Ayesha to cancer. 'Lost two grandmothers, lost a Father, lost my sister... and now I lost a little brother.' Shaq said.

Shaquille wrote on Sunday: 'There's no words to express the pain I'm going through with this tragedy of losing my niece Gigi & my brother @kobebryant I love u and u will be missed'. Just an hour before the crash, Shaqs son Shareef received a message from Bryant asking how he was. The families were very close.