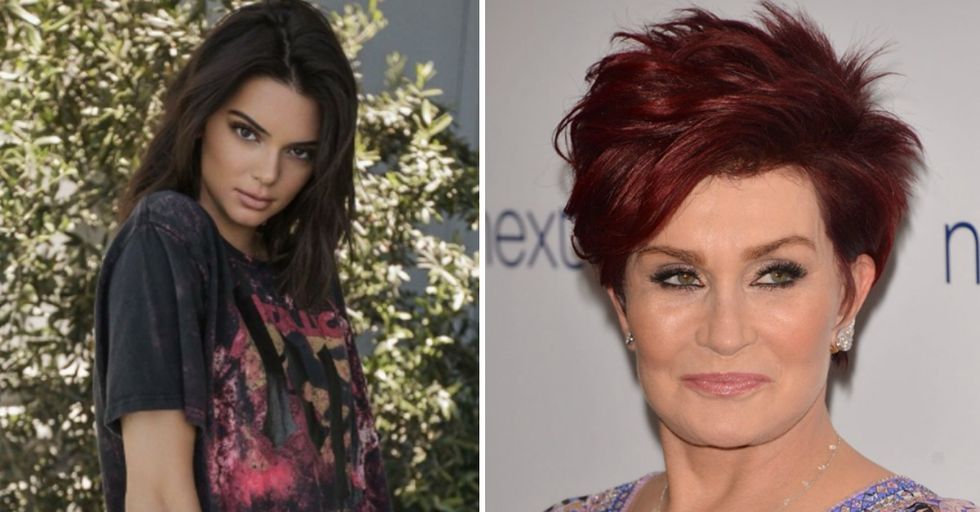 You would think that if you were extremely famous — like Kendall and Kylie Jenner, for whatever they're famous for — that you would have a team of people that could prevent you from doing really stupid crap. But as we've seen time and time again, this doesn't seem to be the case.

For those who keep tabs on social media and celebrity culture, Kendall Jenner and Kylie Jenner are certainly known quantities.

The siblings have made names for themselves in the world of reality TV, having appeared regularly with their Family on Keeping Up with the Kardashians, drawing fans and critics alike for the lavish lifestyles.

They've parlayed their notoriety into a uber-successful fashion line together and individual ones as well.

The products are indicative of the casual and elegant luxury that the two exude on their shows and the red carpet.

Sharon Osbourne, while not a Kardashian, is a reality TV star in her own right, having made a name for herself as the wife of Ozzy Osbourne.

Since appearing on MTV's The Osbournes, Sharon's found a platform to call out others. She's also found that she's never hesitant in using it. Can you see where this might be going?

To Sharon's credit, the things she speaks up about are often "for the people," rather than issues that personally affect her.

Sometimes that line gets blurred when she sees famous people being disingenuous, especially about the rock and roll lifestyle she knows all too well thanks to her marriage to Ozzy. So when the Jenner sisters tried to pass off their high-price clothing as "vintage," you better believe Sharon had something to say.

She's an authority on rock and roll...as well as speaking up.

Watch the sparks fly when the outspoken rocker mom set her sights on the lighting rods of attention that are Kendall and Kylie Jenner. Maybe they shouldn't have slapped their faces and designs over a pic of her husband. Just sayin'...

This week Kendall and Kylie added a limited-edition vintage T-shirt collection to their Kendall + Kylie fashion line, and crap hit the fan.

$125 for a shirt that features an Instagram pic of Kylie or Kendall’s face, or “KK" over an authentic vintage band T-shirt. Yes, $125 for a T-shirt that basically has their face covering up what you would actually want on a vintage T-shirt.

To say that people were less than thrilled would be like saying $125 is a GREAT bargain for a T-shirt.

"Who tf told Kendall and Kylie it was chill to use Pac and Biggie as a background for themselves on their graphic tees? Cause no," another one tweeted. “CAN I JUST SAY THAT THESE KENDALL AND KYLIE VINTAGE TEES ARE SUCH A BAD IDEA…. ?????? No one wants Kendall’s face on a Pink Floyd shirt," added another.

The backlash was so strong that the girls pulled the shirts and issued this apology:

"The designs were not well thought out..." Gee, ya think? All they did was put an Instagram shot of their face directly on top of a carefully designed album. It doesn't seem like a whole lot of logical thinking went into these designs. It wasn't just fans who were upset either.

An hour or so before the apology was tweeted out, Sharon Osbourne — wife of Ozzy — has her own response to the sisters using his image on one of the shirts.

"Girls, you haven’t earned the right to put your face with musical icons. Stick to what you know…lip gloss."

Given that her tweet was retweeted almost 100,000 times, it's safe to say that people are on Team Sharon and not Team Jenner. She wasn't the only one distancing herself from the girls...

And the hits keep coming.

Whoever is managing these girls must be on vacation or something because this whole thing was just...not good.

They tackled (and slapped in the face!) some of music's biggest icons.

Replacing the stars with their branding. Many thought it was a total "Kardashian" move, and not in a good way. To say sales fell flat is an understatement. Maybe it was the concept. Maybe it was the price. It was certainly SOMETHING, though.

When Metallica's lead singer is weighing in on fashion, that's a sign that something's gone wrong.

Yet he felt compelled to, and understandably so. Not just for him, but for his fans who felt co-opted.

A lawsuit was inevitable, right?

You better believe it. These are high-power stars with strong brands they went after.

All this over some (very expensive) t-shirts.

Some people think Sharon was a little bit too harsh on the sisters, but if you put it out there, you have to expect that response. What do you think?