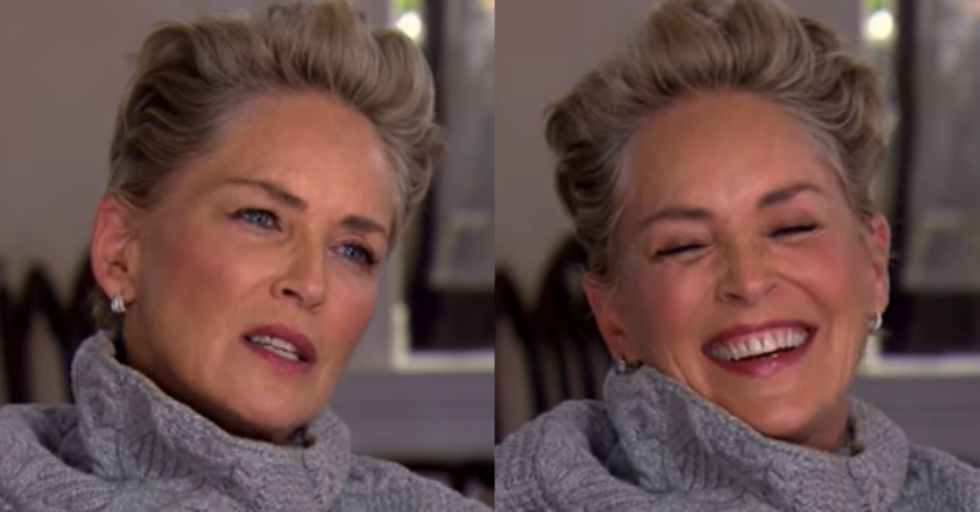 Sharon Stone has once again proved that she's a certified badass.

Not like any of us were wondering. If you've seen literally anything the woman has done, you know with 100 percent certainty that she is an absolute powerhouse. Obviously, she's had iconic roles in films like Basic Instinct and Casino. She's also a humanitarian and activist who has raised money and awareness for a number of worthy causes. If you're looking for a powerful woman to idolize, Sharon Stone should be at the top of your list.

As it turns out, her badass attitude isn't limited to the roles she's held in some of her most well-known films.

Stone recently sat down for an interview with CBS Sunday Morning's Lee Cowan. At some point, the conversation turned to the topic of sexual harassment within the entertainment industry. It's a topic that people have been talking about a lot — particularly since the Harvey Weinstein scandal broke, followed by the #MeToo movement and Time's Up legal defense fund.

Cowan asked Stone whether she'd ever experienced a situation "like that," where she felt uncomfortable.

Come on. Seriously, dude? Stone responded in the most amazing way possible. Watch her reaction here:

She laughed for a full 10 seconds at Cowan's question. Cowan, meanwhile, squirmed to show his discomfort. "I don't know if that's a nervous laugh or an 'Are you kidding me? Of course I was' laugh," he said as Stone continued laughing maniacally at the absurd question.

After taking the full 10 seconds to show Cowan how absolutely ridiculous his question had been, Stone made it very clear that, uh, YEAH, she'd been in "uncomfortable situations."

"Can you imagine the business I stepped into 40 years ago?" she asked. "Looking like I look?" Last year, we found out that Harvey Weinstein had been sexually harassing and assaulting women for decades. The phenomenon of men in positions of power assaulting the people below them is not new, people. What's new is that the behavior is finally (finally) coming to light.

"[I was] from Nowhere, Pennsylvania," Stone continued. "I didn't bring any protection."

"I've seen it all." Stone's reaction was exactly what Cowan deserved after asking such a ludicrous question. The Internet definitely took notice...

There's really no good reason for Cowan to have asked that question. Either he was actually completely ignorant of how widespread the issue of sexual harassment is in the world, or he was trying to get Stone to tell him a story she hadn't shared before. Her laughter was all the answer she needed to provide.

And although the laugh was 100 percent FIRE, sexual harassment is (obviously) not a laughing matter.

In fact, there already is a story of Stone being exploited floating around the Internet — maybe Cowan could have done a quick Google before the interview? As it turns out, Stone was not aware of how much of her body was actually going to visible during her crossed-legs scene in Basic Instinct. The director had told her that no one would see anything. When she first saw the scene (in a movie theater full of strangers), she was shocked and embarrassed.

Sexual harassment is a huge, sweeping problem all over the world today. Or didn't you notice as you scrolled through a seemingly endless litany of #MeToo posts last year?

As the clip gained popularity, Stone herself retweeted it:

Like I said, she's a total powerhouse. We should all want to be Sharon Stone when we grow up.

You can see the full CBS interview here:

The maniacal laughter kicks in at about 5:15. You're welcome.