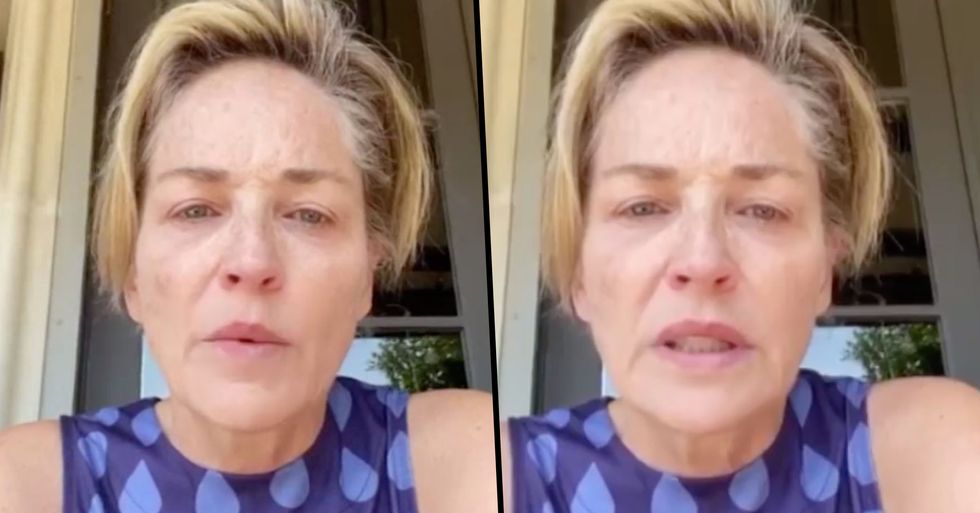 Sharon Stone has shared an emotional video where she reveals the horrific impact COVID-19 has had on her family...

Sharon Stone has become the latest celebrity to speak out about the personal impact coronavirus has had on her.

The star posted a video on her social media today and she is furious.

The sixty-two-year-old actress rose to fame originally as a model, before hitting the big screen.

She comes from humble beginnings.

Sharon got her big break with Arnold Schwarzenegger in 1990's Total Recall.

And it was only up from there when shortly after, the star landed the breakthrough role as a sociopath novelist, Catherine Tramell, in Basic Instinct.

Including a lucrative Primetime Emmy Award and a Golden Globe Award, as well as having received nominations for an Academy Award and 2 Screen Actors Guild Awards, just to name a few.

Sharon revealed some alarming news to fans, and she didn't hold back.

It's safe to say the global pandemic has hit the world hard...

And we are still in the midst of lockdowns, quarantines, and social distancing measures.

And Sharon Stone has had enough.

The actress took to Instagram to reveal just how much the virus has affected her family.

The star has had 2 family members die from COVID-19.

Sharon also says her mom has had all sorts of health issues...

But is asymptomatic for COVID so she can't get a test, something she says is causing unbearable stress for the family. The family live in Montana, where testing is only given to those with symptoms.

She called out government officials for not enforcing a mask mandate during the clip.

And says she desperately tried calling Montana Gov. Steve Bullock and public health officials to get answers but she's gotten nothing in response from either. "They keep saying that the risks are so small and that you might not die and it’ll be fine, but I’m telling you what’s going on with my family."

And Sharon says there's one person to blame for this...

The actress brands him a "killer."

And blames him for her circumstances and other families enduring similar grief due to the virus.

She really didn't hold back...

Sharon ended her video by urging her followers to vote, expressing her support for Joe Biden and Kamala Harris. "Please vote, and please, whatever you do, don't vote for a killer."

Watch the full video below.

To read about another celebrity who has spoken out about coronavirus, scroll on...